With an extensive development plan for the 153-acre Angel Stadium site, Los Angeles Angels owner Arte Moreno and his investors manage to thrill with their ambitions—but punts on a decision whether to keep Angel Stadium or build a new ballpark.

The plan is along the lines of what Moreno and his investment group, SRB Management Co., had proposed in prior discussions with the city when negotiating a $325-million purchase of the ballpark site: a built-from-scratch neighborhood that would replace a hodge-podge of parking lots and low-slung structures into that they call a “transit-oriented, walkable neighborhoods, parks, public spaces, entertainment, restaurants, shops, hotels, offices connected by grand streets and entry ways.” The whole shebang is built around either a renovated, existing Angel Stadium or a new ballpark. In fact, the development plan presented to Anaheim yesterday acknowledges that decision to punt and prepares two different scenarios. One shows an Angel Stadium plan that strips away some of the Robert A.M. Stern/Populous “Outfield Extravaganza” decorative elements installed in 1998, like the center-field boulders and geysers. A new conceptual rendering shows a new outfield area similar to the original Anaheim Stadium concrete deck hosting the original Big A. This open space would open to the development and potential amenities like restaurants and bars.

Also gone: the hat and bat canopies at the main entrance, with the façade looking more like the original Anaheim Stadium entrance. The second shows a development plan with a new ballpark built to the east of the existing ballpark, closer to the Orange (57) Freeway and the Santa Ana River, where the current Big A sign stands. That sign would remain in its current spot under both site plans. This space would be reserved for future development as “flex space,” used for outdoor activities and potentially pop-up events. 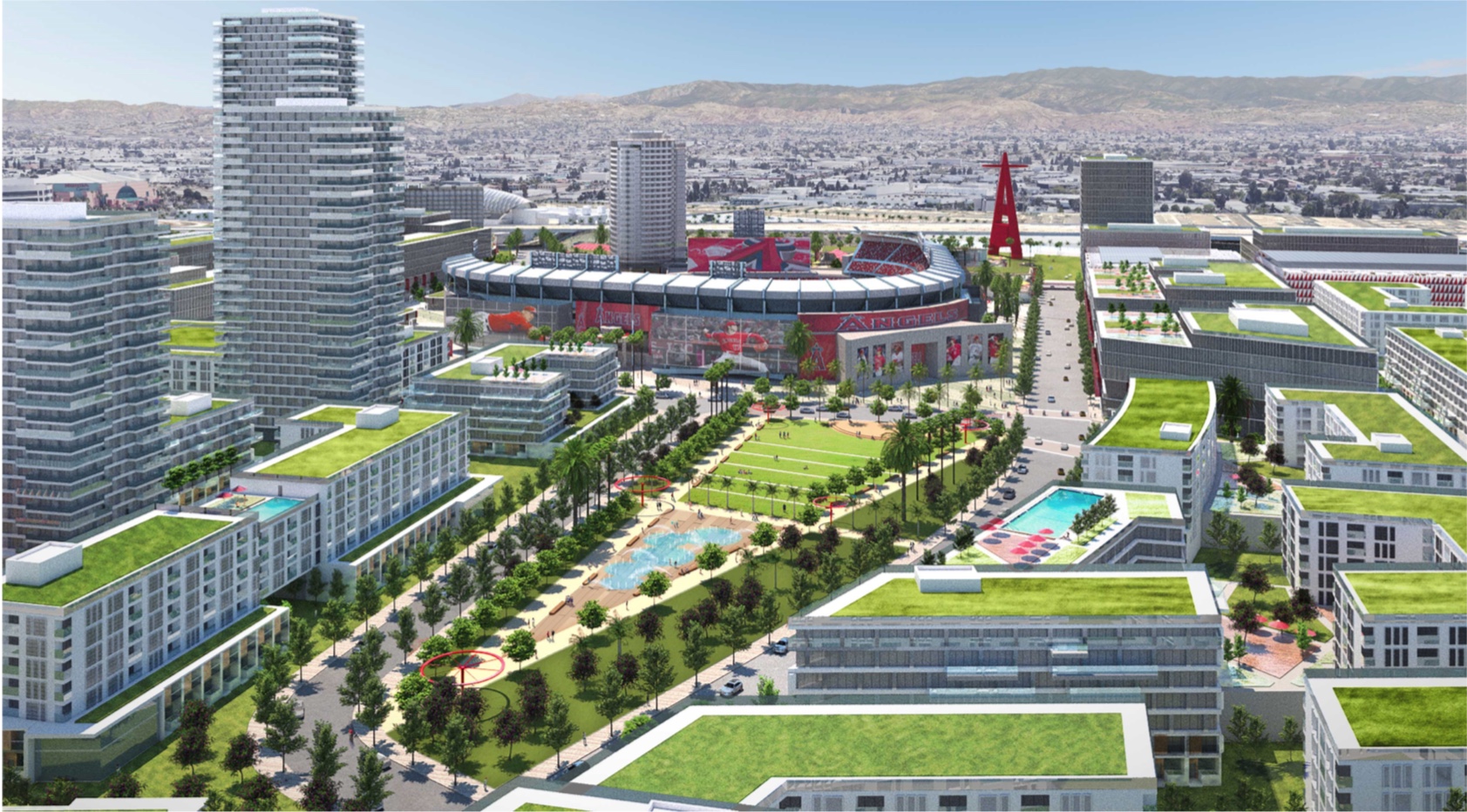 If Moreno and his SRB investment group do decide to move forward with a new ballpark, a 45,500-seat facility is envisioned, the same size as the 45,483-seat Angel Stadium.

While SRB Management Co. says in its presentation that development around Wrigley Field and Petco Park were inspirations, the better analogy is with The Battery and Truist Park, home of the Atlanta Braves. The construction of Petco Park did certainly draw plenty of investment to the Gaslamp Quarter of San Diego, but the Gaslamp Quarter was an existing neighborhood that needed a boost. Similarly, it’s not as though Wrigleyville didn’t exist before the most recent Wrigley Field renovations. With both The Battery and a proposed Anaheim development, the environment is basically built from scratch. But what an environment. Here’s what is proposed for the new Angels community, themed as six mixed-use neighborhoods:

One interesting design element to the development: a proposed halo concept to tie into the Angel Stadium/Angels branding, utilizing an overhead plane of illuminated halos to unify the entire community. Overhead halo canopies would be placed above gateways and hubs of activity across the community. You can see it implemented in some of the renderings. (Be warned that these are all conceptual plans at this point.)

Now that there’s an actual proposal before city officials, SRB Management Co. has proposed the following timeline for the city approval:

But it could take several years before we see ballpark changes and mixed-use development. The final master site plan approval is not foreseen until 2021 or 2022 at the earliest, with the close of the sale of the site to SRB Management Co. expected in 2023. And the $325-million price tag could change, depending on the final development plan and the amount of open spaces and affordable housing. Still, the deal at this time commits the Angels to Anaheim for the next 30 years, with five five-year options. And the potential economic impact is huge: 45,300 jobs and a $7 billion impact on the local economy, according to SRB Management Co.

The news was heralded by Anaheim Mayor Harry Sidhu:

A statement from @MayorHarrySidhu on the proposal presented this afternoon for development around @angels baseball stadium. Read more at https://t.co/83qVSvD9S1. #angels #anaheim pic.twitter.com/ZIK0oDtNs8

This proposal does not cover all potential development in the Platinum Triangle area. Adjacent to the Angels site is the Honda Center, home of the NHL’s Anaheim Ducks, and its adjoining acreage. Team owners Henry and Susan Samueli are presented their own development plan for the Honda Center site today.