In a multiyear effort, the Philadelphia Phillies enhanced Citizens Bank Park with a series of successful renovations, yielding a better experience for fans of all ages. The project is being cited with the first-ever Best Continual Ballpark Improvement in the annual Ballpark Digest awards.

Citizens Bank Park opened in 2004, replacing the multipurpose Veterans Stadium as the team’s home. The ballpark had generally carried a solid reputation since its opening, but the Phillies have boosted its standing in recent years through offseason renovations yielding new concession stands, revamped entry plazas, a kids area, a rebranded and renovated restaurant, new outdoor gathering spaces, and the restoration of a Liberty Bell from Veterans Stadium.

Prior to the 2018 season, the Phillies launched a round of renovations targeting the areas between the foul poles in the outfield, ranging from new concession stands in left field to Ashburn Alley improvements to a kids’ area in right field. There were other improvements incorporated as well, including renovations to the Bill Giles Party Suites. The firm EwingCole, which collaborated with Populous (then HOK Sport) on the original design of the ballpark, was brought in to work on the renovations, guided with feedback from the Phillies to target very specific areas of the ballpark.

“We heard feedback from the Phillies thinking that the ballpark had aged well,” said Kevin Murphy, Principal, EwingCole. “There wasn’t really a need to do anything drastic or dramatic, so the series of improvements that were made were really focused and really targeted to a couple of areas that could’ve benefitted from being improved and just made a little more modern with things like Instagrammable moments, which really didn’t exist in 2004.”

In an area in left field, new permanent concession stands were installed, including a relocated Bull’s BBQ—named for former Phillie Greg Luzinski, whose nickname was The Bull. With this addition, project officials were able to give the ballpark a more cohesive look, as permanent, prominently branded stands replaced more temporary looking areas.

“I guess Aramark (Citizen Bank Park’s food and beverage provider) really wanted more options for stuff, and there was some temporary stuff that the Phillies weren’t in love with,” said Don Jones, Principal, EwingCole. “Bull’s BBQ was in right field, and it was a tent also and was kind of temporary, so they made all of those things more permanent and then they moved them to this left-field concourse area that’s pretty alive now.” The concessions area is located near Citizens Bank Park’s Left Field Plaza, which became something of a shrine to the team’s history. The Phillies Wall of Fame was moved to this entrance, displayed on a wall behind oversized replicas of the franchise’s two World Series trophies and retired number statues. Not only did this addition make for a more memorable first impression for fans entering in this area, but it provided Citizens Bank Park with a series of selfie spots.

That objective, to make ballpark gates a destination rather than a simple access point, carried over to the renovations leading up to the 2019 season. In that round of improvements, the Phillies installed a 19-foot tall Liberty Bell, once displayed in Veterans Stadium, outside the third base gate, while converting space next to the third-base plaza into Pass and Stow, a new destination with indoor and outdoor amenities.

The Liberty Bell was actually the second to be displayed at the Vet, hanging from the catwalk above center field starting in 1983 and remaining there until the facility’s closing. The Phillies managed to reclaim it prior to the 2019 season, restoring it and putting it on display in a fitting location: not only can it serve as a backdrop in photos of the Mike Schmidt statue, but it also ties into the theme of Pass and Stow, named after Philadelphia foundry workers John Pass and John Stow, who recast the original Liberty Bell in 1753.

In a sense, this improvement compliments the work completed in left field the year prior, allowing two prominent entries at Citizens Bank Park to become unique focal points of the ballpark.

“When originally the ballpark opened, coming off of Veterans Stadium, the idea was to get people to the field as fast as possible,” said Murphy. “So, to get in off the street and get glimpses of the field quickly. I think the 2018 and 2019 projects thought, let’s utilize those plazas at the corners a little bit more as destinations as opposed to places you went through in order to get to the field. The work that we did in left field was to bring some of the team’s history in, and that sort of concept was applied at the third base plaza.” The 2019 improvements also saw the addition of Pass and Stow and a new 120-seat Shake Shack, also located near the third-base plaza. Immediately outside of Pass and Stow is an area with a design Murphy described as being inspired by “the backyard kind of feel,” featuring a beer garden, picnic tables, fire pits, picnic tables, brick-oven pizza, and a Phillies-etched water feature. The bar in particular stood out, with project officials believing they created a space providing a social atmosphere.

“McFadden’s had built a pretty basic, I guess you would say, outdoor bar that was just a means to an end,” Jones said. “In this case, we pulled it free of the restaurant and made it its own thing, it got branded by a sponsor—Goose Island—and it’s nice. It’s got TVs all around it, very popular before the game as a place to hang out.”

Inside, Pass and Stow is equipped with numerous TVs, and plenty of homages to the team’s history—ranging from images of vintage logos and programs, to design plans for Veterans Stadium. The Phillies intended for Pass and Stow to be designed as a family friendly sports theme, reflecting a theme apparent in other renovated areas.

Catering to Fans of All Ages

One of the signature pieces of the 2018 renovations is the kids’ area, named The Yard. Along with a Wiffle ball field built as a replica of Citizens Bank Park, the 13,000-square-foot interactive area includes a 30-foot climbing wall, speed pitch, and a hot-dog launcher. In addition, the space features a bar area serving ice cream on the side facing the amusements within The Yard, while the side facing the playing field caters to adults with beverage options such as beers, wines, cocktails and frozen drinks.

Given how these renovations took place, the Phillies and project officials managed to incorporate improvements appealing to all ages. When asked if this was a deliberate goal, Murphy emphasized that it was, noting how baseball itself has a multigenerational following.

“Absolutely intentional,” he said. “Baseball is really, probably more so than any other sport, a multigenerational experience and that is absolutely something that you absolutely want to appeal to. Everyone from kids up to grandparents or great grandparents.” 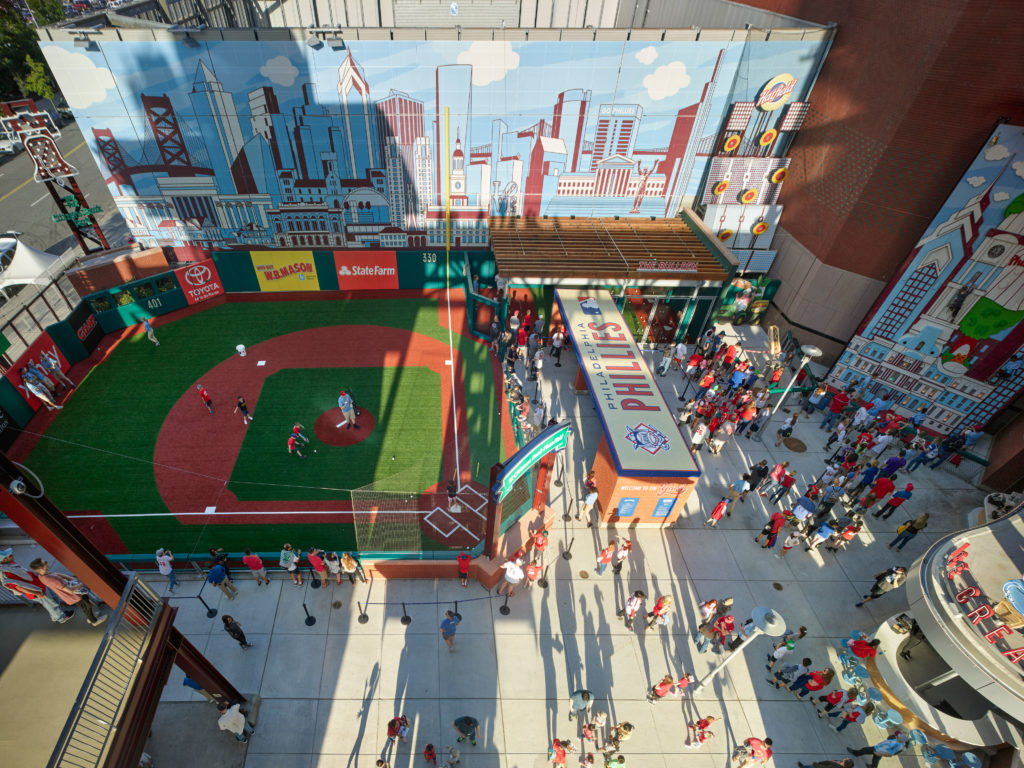 With the renovations, project officials overcame a number of challenges. The renovations in both rounds of construction needed to be completed in a tight timeframe, with the construction completed before the 2018 season largely taking place outdoors. Jones also stressed the level of collaboration among the multiple parties involved in completing The Yard, which involved firms such as Daktronics for the videoboard, Metcalfe Architecture Design, ClimbZone for the climbing wall, Art Guild, and Younts Design for graphics such as the mural of the Philadelphia skyline. (The Phillies recognized these firms’ contributions to the offseason renovations, along with those of architect of record DAIQ, EwingCole’s collaboration with DAIQ, contractor LF Driscoll, project manager John Stranix, and lead design consultant Janet Marie Smith.)

For EwingCole, one of the most helpful aspects of this was the firm’s familiarity with the Phillies and Citizens Bank Park itself. Part of this involves the more technical, but crucial aspects of the ballpark, including knowledge of where utilities are located as well as the operation of mechanical and electrical systems. More than that, however, the firm also believes it had a strong understanding of the organization’s culture, and how that could influence the renovations.

“We knew what the structure was, we knew where all the utilities were, we knew how the mechanical system worked, the electrical system worked, so there were some practical things there,” Murphy said. “But I think we also knew how the Phillies thought. [Phillies executive vice president] Dave Buck, [Phillies senior vice president, ticket operations & projects] John Weber, these guys were around during the original design of the ballpark, so I think there was a real understanding of the culture of the Phillies and what they were trying to achieve.”