You are here: Home › 2019 Renovation of the Year: American Family Fields of Phoenix
By Kevin Reichard on September 11, 2019 in Awards, Major-League Baseball Extensive renovations that markedly improved training conditions while also enhancing the fan experience at American Family Fields of Phoenix were recognized in the 2019 year-end awards from Ballpark Digest, with the spring home of the Milwaukee Brewers cited in the website’s annual season-end awards as the Ballpark Renovation of the Year.

“The old Maryvale Baseball Park was a very limited facility, both for fans and for players,” said Ballpark Digest publisher Kevin Reichard. “With the renovations to American Family Fields of Phoenix, Brewers players now can prep for the season in a state-of-the-art facility, and fans can enjoy plenty of access to player workouts and then watch a spring-training game in comfort.”

“The Milwaukee Brewers are honored to accept this award from Ballpark Digest, and it was made possible through the contributions of many parties,” said Rick Schlesinger, Brewers President of Business Operations. “We want to thank the City of Phoenix, American Family Insurance, HKS, IFG and the construction team at Mortensen for helping make this project a reality. Collectively, they joined us in creating a world-class facility for our fans, players and staff.”

“The Maryvale Baseball Park had long been the neglected site in the Cactus League,” said Mo Stein, FAIA, Principal Architect for HKS. “With the determination of the Brewers and the City of Phoenix, we were asked to transform this site to be their ‘baseball heaven’ for players, coaches and fans. The Maryvale area has worked hard to regenerate. We are thrilled this planning and design was able to reconnect people and place for American Family Fields of Phoenix. Simple buildings, local materials and the colors of our environment have made this a true point of pride for everyone.” 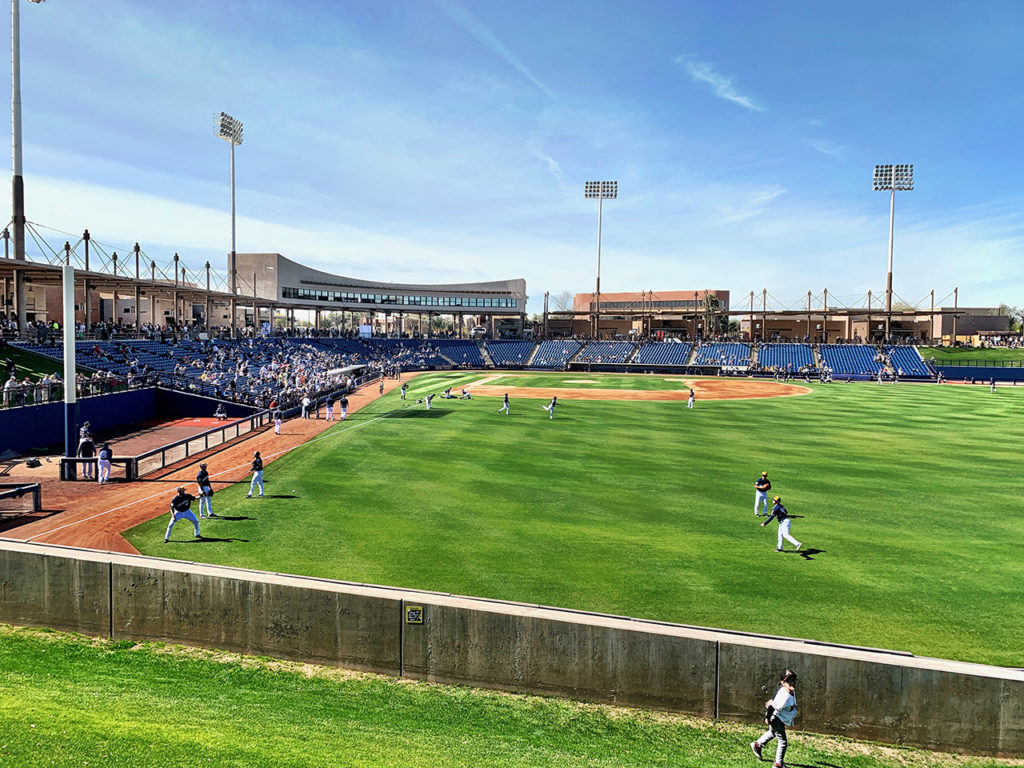 The old Maryvale Baseball Park opened in 1998 as the spring home of the Brewers and was largely unchanged since then. What was considered state of the art in 1998 became dated over time, and it was clear in recent years the facility was not working optimally either for players or for fans. After making the decision to stay in Phoenix, the Brewers then worked with the city on an accelerated 10-month construction/renovation plan designed to improve player training facilities while presenting a more welcoming stance to the Maryvale community and Brewers fans.

These renovations included tearing down a separate Minor League clubhouse and forsaking some parking in order to add a new, large building as well as a new practice field (built with Miller Park’s dimensions) and an agility field that opens to both the MLB and MiLB areas. That new building serves the needs of both the business operations and player development while stressing Brewers history, with other changes for both fans and players were implemented throughout the complex. Left largely intact: the old training fields and the main parking lot–but they’ve been altered to encourage more interaction as fans head from their cars to the ballpark. For fans, a new expanded entry behind home plate opened the ballpark to the community, while inside fans were treated to upgraded concessions, additional theater-style seats, and an expanded team store. The year-end Ballpark Digest awards annually honor the best of the baseball industry, covering MLB, MiLB, independent-baseball, and summer-collegiate programs in a wide range of categories. Awards for Ballpark of the Year (Las Vegas Ballpark) and Team of the Year (Las Vegas Aviators) were unveiled in late August, with announcements running through the fall and culminating in an awards reception at December’s Baseball Winter Meetings.

“Fans were blessed by an abundance of riches this season,” Reichard said. “We saw great new ballparks open in Las Vegas, Fayetteville and Amarillo, with the Milwaukee Brewers debuting a noteworthy renovation at American Family Fields of Phoenix. All four facilities advanced the art of ballpark design.”

This is not the first time the Milwaukee Brewers franchise has been honored by Ballpark Digest: In 2017 upgrades to the concessions offerings at Miller Park landed the team the Best New Concessions Experience Award.