You are here: Home › New for 2019: Routine Field
By Ballpark Digest Editors on September 26, 2018 in Future Ballparks, Independent Baseball 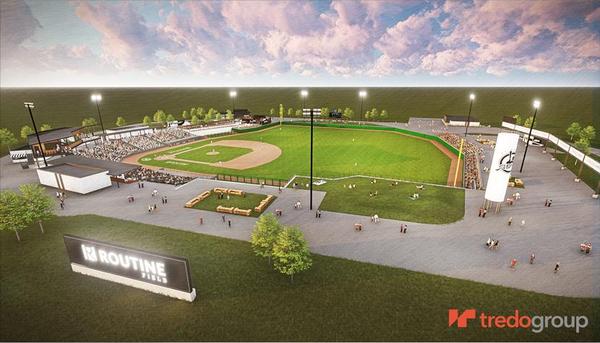 ROC Ventures and Routine Baseball have announced a naming-rights deal for Routine Field, the upcoming home of the Milwaukee Milkmen (independent; American Association). Routine Field, a 4,000-seat facility at Ballpark Commons in suburban Franklin, is set to open spring 2019, and will be home to the Milkmen and University of Wisconsin-Milwaukee baseball. As part of the naming rights agreement, sponsored signage and logos will be visible around the ballpark, including several outfield locations and on the turf near first and third base.

“As a baseball inspired brand that strives to create one-of-a-kind fan experiences, we knew that partnering with ROC Ventures would be the perfect match to enhance programming at Routine Field and beyond,” said Michael DeGrave, owner at Routine Baseball. “We’re looking forward to working closely with the Franklin community to provide a top-notch atmosphere unlike any other in Southeast Wisconsin – exactly what ROC and Routine stand for.” Founded by entrepreneur and business owner Michael DeGrave, Routine Baseball is known for bridging the gap between baseball and streetwear to provide a unique apparel experience to baseball players and fans alike. The Company has a variety of over 150 product offerings for men and women including collaborations with adidas, MLBPA and more. The fellow Franklin company has also established an expansive sponsorship with ROC Ventures as the provider of merchandise and promotional products for the Milwaukee Milkmen and entire ROC portfolio. With over eight years of lifestyle apparel expertise, Routine will aid in creating an elevated retail offering to match the fan-centric experience at Ballpark Commons that includes various entertainment and lifestyle features for the community. “We’re proud to have a local company like Routine Baseball represent our field and work side by side with our team as we continue to build a state-of-the-art facility that not only our players will enjoy, but the entire community, for many years to come,” said Mike Zimmerman, chief executive officer at ROC Ventures.