You are here: Home › Making Over Dudy Noble Field: A Two-Year Project
By Jarah Wright on January 26, 2018 in College Baseball, Features, News 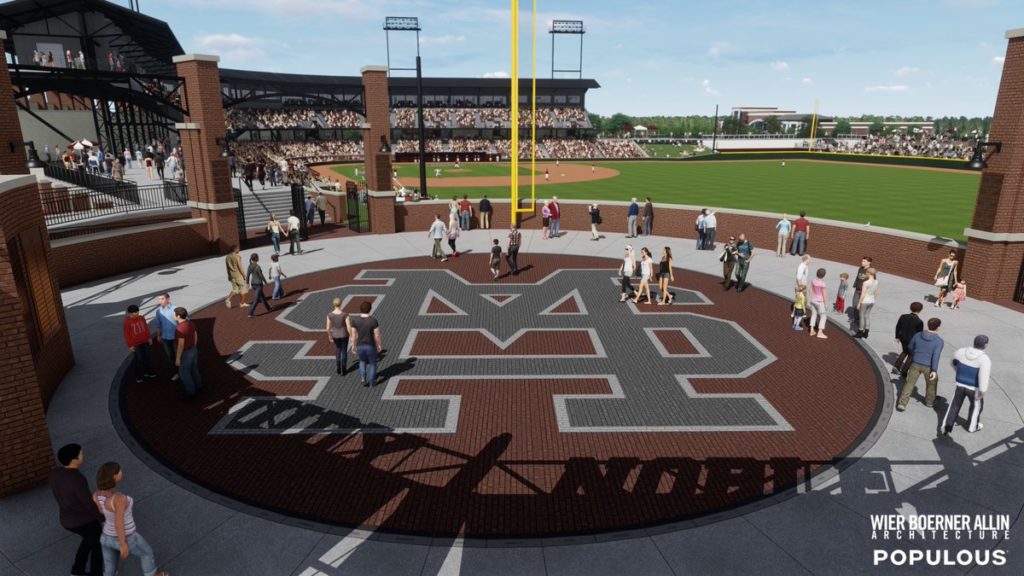 SEC baseball powerhouse Mississippi State University has never been afraid of embracing change and finding new ways to upgrade and enhance Dudy Noble Field, as the home of the Bulldogs is the midst of a two-year renovation set to be completed for the 2019 season.

Multiyear renovations may lack a huge reveal, but they do allow improvements to be rolled out as soon as possible for fans. One example of that is the addition of the largest scoreboard in college baseball just in time for the 2017 season. The new scoreboard is 43.2 feet tall and 60 feet wide, covering 2,592 square feet.

Leading the charge on this project is Jackson, Mississippi-based architecture firm Wier Boerner Allin Architecture and Principal Architect Michael Boerner. It is, to a great extent, a local project.

“We have 21 people in the firm and 18 of us went to Mississippi State. We are definitely fans,” Boerner said. “We were hired to work on the softball and tennis facilities at Mississippi State in 2010. We were wrapping that project up in 2012 when [former athletic director] Scott Stricklin asked if we would like to look at the baseball stadium and come up with ideas for that. We were doing backflips when he said that was an opportunity.”

Research became the main focus for the next year as Boerner looked to get as much advice and input as he could, which included turning to a fellow Mississippi State grad working in professional baseball. Janet Marie Smith’s legacy in ballpark design includes the original plan for Oriole Park at Camden Yards, the renovations to Fenway Park that included the unique Green Monster seating, the successful makeover of Ed Smith Stadium and the recent upgrades to Dodger Stadium.

“I met Janet Marie Smith while working on my thesis project as a student in 2001. She’s originally from Jackson and was coming home to see her family for Christmas. She sat with me for an hour discussing ballparks and it was a fantastic experience for me as a student,” Boerner said. “I had no idea our paths would cross again. I was able to reach out to her in 2013 and we were able to get her feedback. She works for the Dodgers now as their Senior VP of Planning and Development. We’ve been able to bounce ideas off of her and her advice has been so valuable to us.”

The group also hired Populous, the national sports-architecture design firm, as a consultant to the project.

“We had never done a baseball stadium of this magnitude before this project. We had worked with Populous on [renovation and expansion of the downtown Mississippi Coliseum] and knew their experience with baseball stadiums,” Boerner said. “We reached out to them and came to an agreement for them to be a consultant to help us with the intricate details about requirements, codes and information they deal with on a daily basis that’s different from our day-to-day experience.”

Boerner and his team also looked at ballparks across the country to get ideas.

“We started brainstorming in the beginning of 2013 and there’s been a lot of research, although it’s hard to call it that because I love baseball so much and we took a lot of fun trips,” Boerner said. “We went to Omaha in 2013 and walked around that stadium – we really enjoyed several different areas. That was special to us. We’ve been to stadiums in South Carolina, Auburn, Ole Miss, several minor league parks, and several big-league parks. We toured Wrigley, Fenway, Dodger Stadium and SunTrust Park. They were fun trips, and we learned a lot that we took back with us.” Upon returning, Boerner and his team identified issues to improve upon with the new design. In 2014, plans for Dudy Noble Field included a new double-tiered grandstand with chairback seating, an elevated concourse, new entry plazas, new premium areas and a concourse that wraps around the field.

The biggest concern, as far as the community was concerned, was how the design would affect the Left Field Lounge, a popular area beyond the left field fence.

“It’s been a hot topic around Mississippi State because a lot of people said that was the most unique thing about the university as far as athletics go. Originally it was just a chain-link fence in the outfield 30 years ago. The university started allowing people to start pulling trucks up to the back of the fence. It became an exclusive area where they sold lot spaces which were basically parking lots,” Boerner said. “You would have about a 9-by-20-foot space to pull your rig in. It’s changed from just a truck to people pulling in old cotton trailers to sometimes a double or triple decker rig.”

Although this area was popular with fans and students, safety concerns became an issue.

“There were no codes that were enforced on building these rigs, so it’s become a liability. Last year, there was a scare with one of those rigs,” Boerner said. “One of those rigs started to lean onto another rig. It was a fraternity rig that had 40 people on it. Luckily, no one was hurt, but the university feels like we’ve been very fortunate not to have any major accidents out there.”

The challenges for the Left Field Lounge was to retain the charm and character of the space while making it safe and fan-friendly.

“For the lounge, we still have those individual spaces and gave the loungeholders four different options of what they wanted their space to look it so they personalize it and decorate it,” Boerner said. “They can choose a single tier, double tier, triple tier, or quadruple tier. It will also have storage and better access to things like restrooms. The boardwalk is back and will be exclusive to the front spaces. There are some incredible images of fans grilling and feeding players in the outfield. I think it’s going to be special, but will take a few years to bring back the charm and character as far as what we’re used to with that outfield lounge.”

Development Outside the Ballpark

Another new addition will be the Left Field Lofts, two-bedroom condos that overlook the field.

“We’re doing 12 units now with a pad for another 12. We’ll start construction for those in March with the first 12 units ready for the 2019 season. I believe they’ve sold 75 percent of them. Sales are going great and we’re excited for them,” Boerner said. “It also has a rooftop terrace that will be a premium space for parties and fans. I believe the capacity will be for 320 people with spectacular views looking over the stadium.”

The whole Dudy Noble Field plan isn’t scheduled to be completed until 2019. Despite construction, Mississippi State will still play there for the 2018 season.

“Even though construction will be on-going, there will still be a capacity for over 10,000 people,” Boerner said. “That’s a lot of standing room but if you go across the country, only a few programs can host that amount of people at a regular game, let alone with construction.”

Construction is still on schedule and excitement continues to build for what will become one of college baseball’s premiere venues.

“Mississippi State fans are very passionate. We think this project is very special. Our firm’s involvement is really special because we have a young group that likes to push the limits. Mississippi State has been a great client that has allowed us to push some limits,” Boerner said. “It’s an honor and amazing to be part of this process, not only as a Mississippi State graduate, but we really feel this is going to be the best stadium in college baseball.”