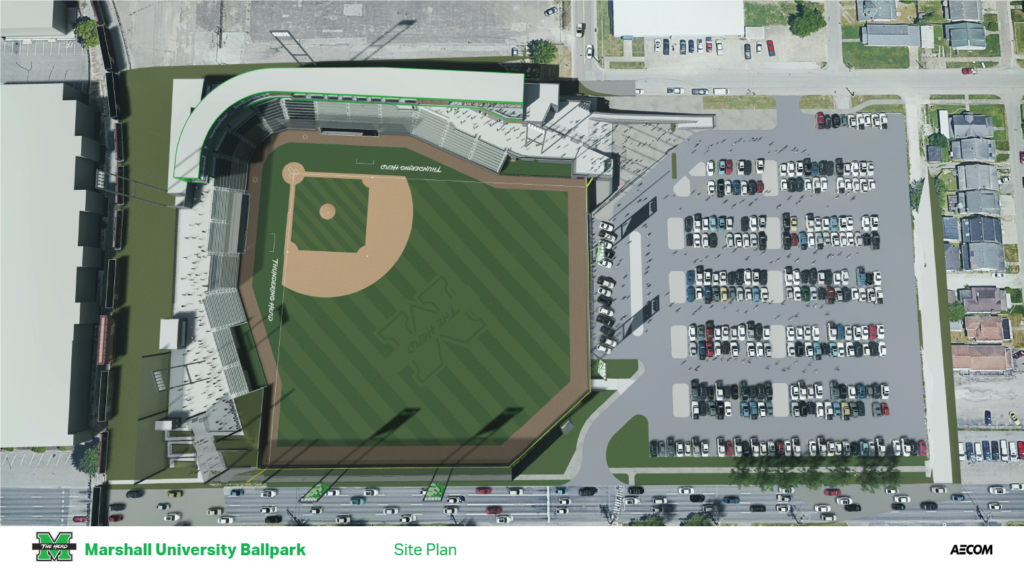 Updated renderings of a new Marshall University ballpark have been released, showing the latest concept for a facility that should meet modern college baseball program needs.

Planning continues for the new ballpark, which is slated to be built at the 8-acre the Flint Group Pigments Plant property in Huntington, WV’s Highlawn neighborhood and open in March 2021. The latest designs for the facility were showcased Thursday at a Marshall University Board of Governors meeting, where AECOM senior project designer Justin Gaa gave an overview of the ballpark’s planned look and feel. It seems that in mapping out the project, the goal is to create a facility that offers the latest in terms of both baseball program facilities and fan amenities. This involves ensuring that all of the needs on the team side–everything from batting cages and training space, to offices for coaches–as well features for fans like an open concourse and premium spaces are worked into the design. More from The Herald-Dispatch:

“Mike (Hamrick) really challenged us to create something state-of-the-art,” Gaa said, referring to Marshall’s athletic director. “He challenged us in a lot of ways.”

The 3,000-seat stadium, which can be expanded to 3,500 seats for postseason play, will feature three levels, artificial turf, two full-size batting cages, three locker rooms, a team lounge, an indoor and outdoor club with box suites, and an open and transparent concourse.

“As you know, the Division I level is highly competitive,” Gaa said. “This facility is going to be exciting not only as a campus asset for athletics, but a community asset. … On the student-athlete side, we were very mindful of how we used the space, so recruiting students was part of the design process.”

The stadium will house coaches’ offices and training space for athletes, which Gaa said is an effective way to build a ballpark.

Marshall’s athletic department is currently in the midst of a fundraising campaign for the $22 million ballpark. The facility is intended to resolve a long-standing challenge for the baseball program, which has commonly used multiple ballparks for home games during the baseball season. Kennedy Center Field in Huntington hosted the majority of games in 2019, with some played at Appalachian Power Park, the home of the West Virginia Power (Low A; Sally League) in nearby Charleston.