You are here: Home › Nine-Story Office Building Slated for Grasshoppers Home
By Ballpark Digest Editors on May 24, 2017 in Minor-League Baseball, News 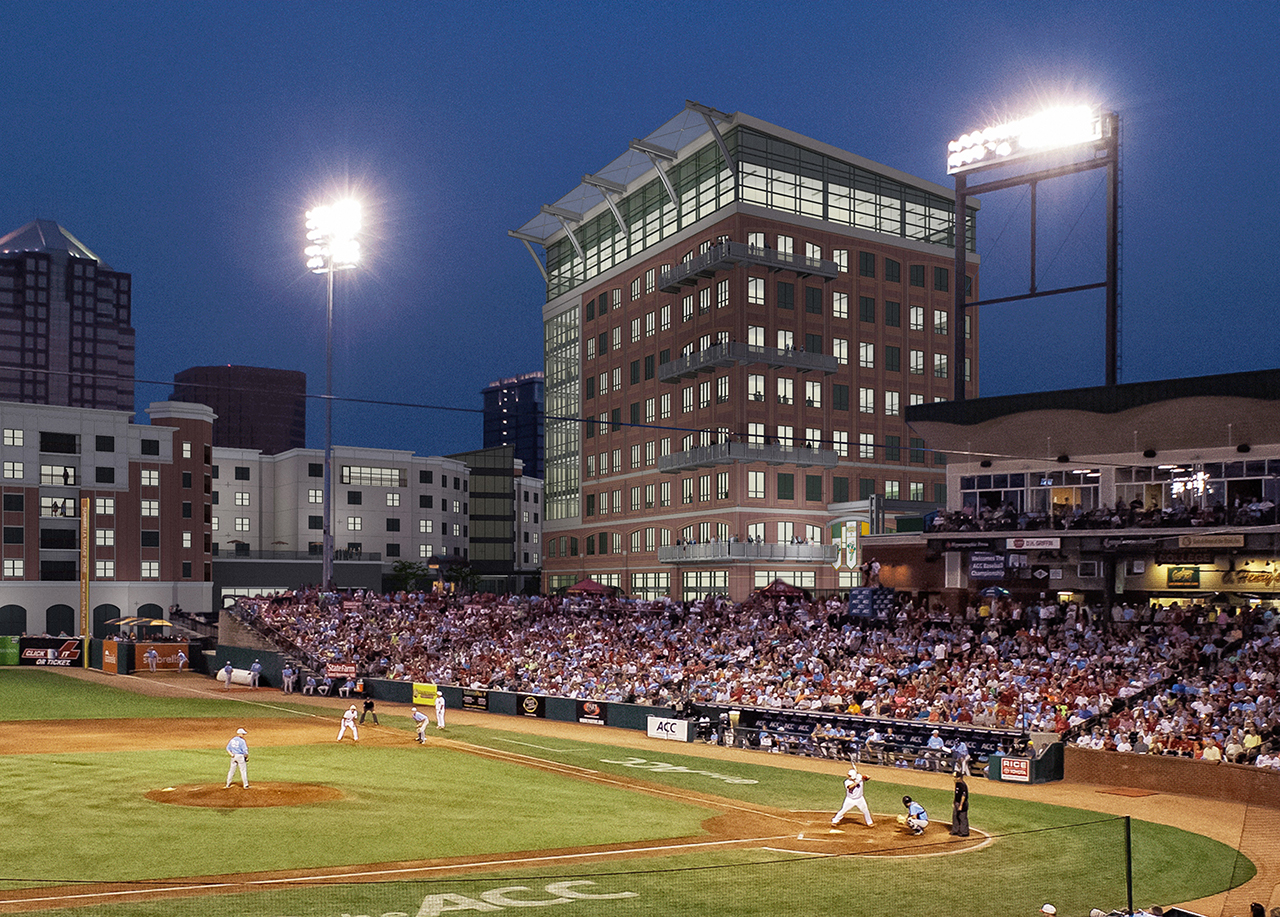 A nine-story, 111,869-square-foot Class A office building is slated to be built just outside the gates of First National Bank Field, home of the Greensboro Grasshoppers (Low A; Sally League), with a new ballpark entrance as part of the design.

The project will be located at the Northwest corner of Eugene and Bellemeade Street, a parcel of land located just outside the gates of the First National Bank Field, home of the Greensboro Grasshoppers.  The land will be purchased from the Grasshoppers organization with the building’s design, accessibility and major features to be integrated into the existing ballpark. The nine-story building will feature retail-oriented space on the first floor with eight floors of office.

Tuggle Duggins P.A., a Greensboro law firm, will be a major office tenant in the project, occupying the top floors of the building.

When First National Bank Field was built, the ballpark’s location was in a relatively underdeveloped part of downtown. Today, there are cranes everywhere in the area, with plenty of development within a rock’s throw of the ballpark — especially on Eugene Street, complete with new apartment and hotel complexes.

Construction is scheduled to start in September 2017 (immediately following 2017 baseball season), with completion in the fall of 2018.

Coleman Team with Linville Team Partners has served as a lead developer on the project and will oversee the ongoing leasing of the office space. The class-A office building will have 65,000 square feet available for lease on floors 1-6, with each floor consisting of approximately 12,700 square feet. A key feature will be a 1,200-square-foot shared space with a balcony overlooking the ballpark for common use among all building tenants. Parking will be available for building tenants and visitors in the planned City of Greensboro parking deck to be built directly across from the building’s entrance on Bellemeade Street.

The project design will retain much of the ballpark’s existing design elements, including brick masonry façade, arched openings and slope roof design.  The building will also have balconies for tenant use.  The project will establish a prominent new ballpark entrance with emphasis on public gathering space along Eugene and Bellemeade Streets for tenants and ballpark patrons.

“The Greensboro Grasshopper organization is excited about the energy that this mixed-use project adds to the overall stadium experience,” said Greensboro Grasshoppers President and General Manager Donald Moore in a press statement. “The office and retail-oriented aspects of this project complement the existing baseball and entertainment operations in First National Bank Field, and the project’s design integrates well with the existing stadium.”

“This is a tremendous new investment in downtown Greensboro. The development team paid close attention to complement the existing ballpark and create an innovative office tower that will change the skyline with Class A++ office and life space,” said Zack Matheny, President of Downtown Greensboro, Inc.

“A unique aspect of this building’s development has been the collaborative nature of initial planning and concept development,” said Robin Team, President of Carolina Investment Properties. “Carolina Investment Properties, GEMCAP, and Linville Team Partners have each contributed development expertise that provides for the unique design, location and tenant centric aspects of this exciting new mid-rise office building.”