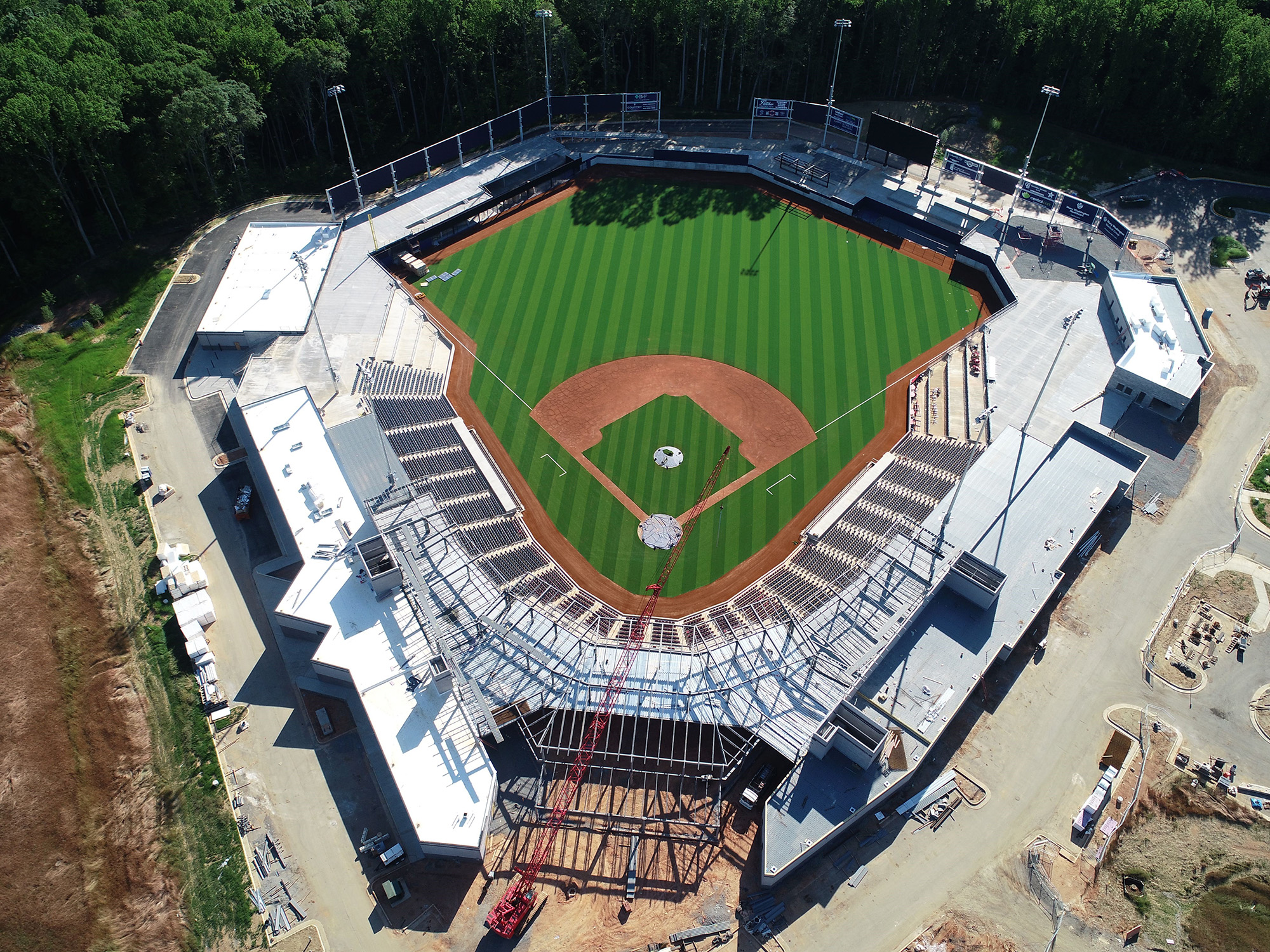 It’s a hurry-up-and-wait situation for the Fredericksburg Nationals (High A; Carolina League), who worked hard to complete a new ballpark for 2020, only to see the season delayed after the sport was shuttered by COVID-19. Here’s a look at the New Fredericksburg Ballpark taking shape in Virginia.

Construction on the new home of FredNats began last July and progressed quickly. The then-Potomac Nationals had been working on a new-ballpark plan with various Virginia communities and counties before finalizing a plan with Fredericksburg, VA

“We had tried for years to build a new facility in Prince William and at some point it was kind of clear that it wasn’t going to proceed there. The City of Fredericksburg reached out to us about two years ago and we started discussions with them,” said Seth Silber, team treasurer and son of team owner Art Silber. “It’s a great community. It’s kind of small-town America with a big population base around it and a great business community. It’s equal distance to Richmond and D.C., so it’s an area that really was looking for a lot of entertainment options.”

The key to the ballpark deal: team owners worked with the City of Fredericksburg to come up with a different type of financing for the $35-million ballpark.

“We worked out a kind of unique arrangement where they make a payment but we privately finance the ballpark through a bond offering,” Silber said. “The bond offering was successful right after the Fourth of July last year.”

The team’s timeline for ballpark construction: 12 months, which is widely considered within the industry as being a tight schedule.

“The site work on the stadium started right around July 15th. About 10 1/2 months ago, this site was all trees and uneven surface,” Silber said. “The site work was completed around mid-October and the stadium should be close to 100 percent complete in 12 months, including the site work, which is pretty amazing.” “We are going to have a manual scoreboard box in right-center field. There is an LED on the outfield wall which is about 30 feet long. That’s where our balls, strikes and outs will be displayed in the ballpark. Above that is going to be a Fenway-esque manual scoreboard,” said Nick Hall, Executive Vice President and General Manager of the Fredericksburg Nationals. “The manual scoreboard is also a suite. If you book a suite in the scoreboard box, your group will be the one that gets to change the score throughout the game. It’s an incredible opportunity for fans to get that baseball experience.”

Do you want to hit in the batting cages while you’re at a game? The Nationals have you covered there, too.

“We have two Field Box suites with a capacity of 30 people. These suites are located in the left-field wall. Just under the 167 feet of LED will be the two suites. You are actually looking through the chain link in left field pretty much eye level with the left fielder,” Hall said. “It’s a really unique experience. That ball is going to be in-play pretty much coming at your face. The coolest thing about that area is that it’s actually located just next to the home team batting cages, and you have the access to actually take some swings in the batting cages during the actual game itself, which is a really cool feature.”

Another interactive area of the ballpark will be the Bullpen Party Deck.

“Our Bullpen Party Deck is located just above the visitor’s bullpen in deep right field. It is a three-tier party deck that can fit up to 120 people so it’s a pretty large area,” Hall said. “You don’t have to book the whole thing. It can be groups of 20, 30 or 40 or however many to make that area work but it’s what we foresee as a bunch of folks coming out here doing some nice, friendly banter with folks who are warming up in the bullpen and the right fielder as well.”

If you’re not sure which suite sounds like the best fit for your group, the Nationals have come up with a package to try different suites on different nights. The Nationals also included the community in its ballpark design.

The FredNats and the city are aiming to land LEED certification for the ballpark, signifying a green, eco-friendly design. The ballpark was designed as a multiuse facility, which meant the installation of synthetic turf instead of grass.

“We will be doing 12 to 15 concerts a year, and to do that on natural grass was never going to work, so we started exploring artificial surfaces,” Silber said. “We looked at Shaw Sports Turf which is what the Diamondbacks installed last year. Ultimately, we got comfortable that it was going to be just like grass. That contributed to the fact that we will use less water and fertilizer. We also have an LED lighting system and energy-saving appliances. We also had the stadium set up to where in the future we can install solar power. LEED is something that we’re pushing for.” The ballpark might not be open yet, but the Nationals are already looking to the future in terms of what events could be hosted at the New Fredericksburg Ballpark.

“We would love to be an event center for this area that hosts more than baseball. We’re very excited for baseball but are also excited to be hosts to the concert series that Fredericksburg is already supportive of,” Hall said. “The previous venue for that concert series was in the middle of a field with no infrastructure around it. Now we have the ability to host things like that. I know Seth’s father, Art, really wants to build a restaurant out here on the grounds. I’m all for it. We’ll see where we go in the next five years. We have a lot of things that we are consistently throwing ideas out for.”

With the ballpark nearing the end of construction and with ideas for the future being discussed, fans are eager to experience the new ballpark and the Nationals are eager to have them.

“To see the support from the business community is really amazing. We sold out of our outfield signs last week. The season-ticket-holder base is over 1,200. The seats behind home plate are pretty much all sold out,” Silber said. “People here are really excited. You see people wearing the FredNats gear all the time. They are trying to get a glimpse of the ballpark. We’re hoping to start doing some events, movie nights, and small concerts soon to get people in. There’s not a bad seat in the house. Wherever you are in the park, there’s going to be a view that going to make you proud of Fredericksburg.”