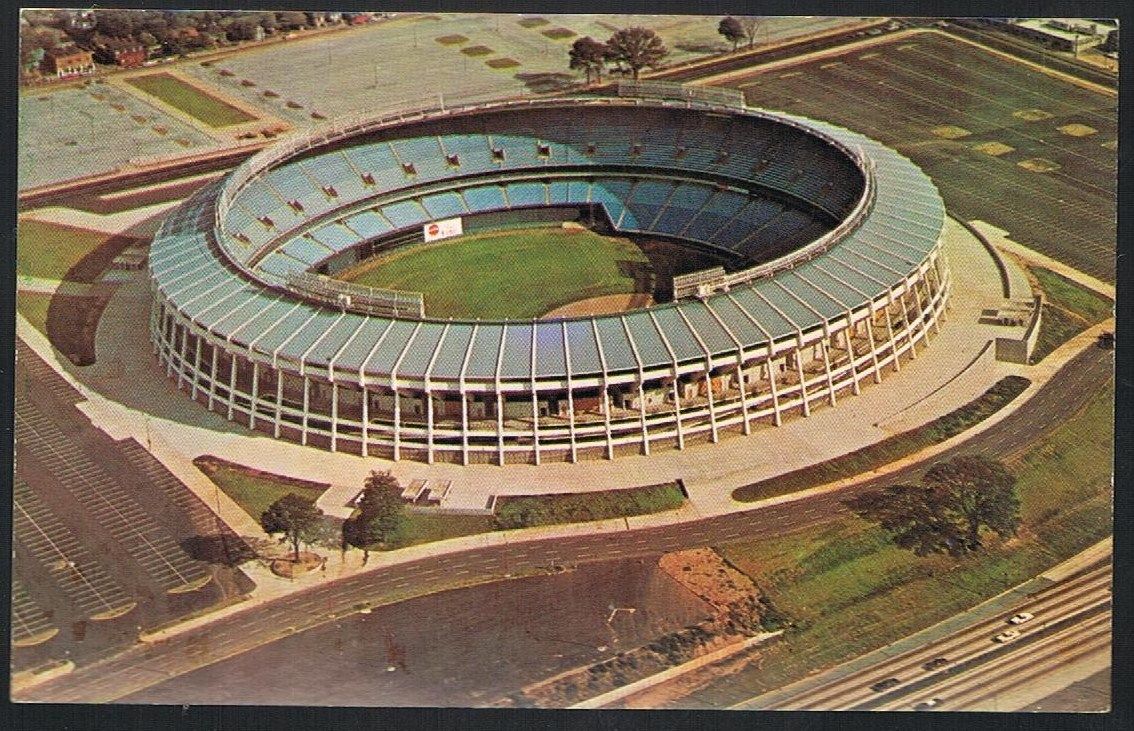 When Atlanta became a major sports city, it did so with the brand-new Atlanta Stadium—a multipurpose facility that reflected its era when it opened in 1965. Later renamed Atlanta-Fulton County Stadium, the venue was demolished in 1997, but current and future plans for the site allow it to be remembered to this day.

In the mid-1960’s, Atlanta began a professional sports facility boom that cemented the city’s place in major leagues. Atlanta Stadium started that wave with its opening in 1965, seven years before the Omni Coliseum opened for the NBA’s Hawks—who had arrived in the city in 1968—and the NHL’s Flames (now the Calgary Flames). Reflecting the multipurpose design of its era, Atlanta Stadium was a circular facility designed to accommodate both MLB and the NFL. The NFL debuted in 1966 in the form of the expansion Falcons, while the Milwaukee Braves were to relocate there in 1965. However, a lawsuit prevented the club from moving on schedule, so Atlanta Stadium’s first season of professional baseball was for the 1965 Atlanta Crackers (International League).

Once the Atlanta Braves arrived in 1966, Atlanta Stadium would begin a 30-year run as a home of Major League Baseball. The Braves would win the National League West title in 1969, but many of the facility’s best moments in early years were shaped by notable individual milestones. It was there on April 8, 1974 that Hank Aaron homered off Al Downing to record his record-breaking 715thcareer home run. Two years earlier, Atlanta Stadium was the site of the 1972 All-Star Game, which saw the National League win 4-3 in extra innings. (As an added bonus for the home-town fans, Aaron homered in that game).

There would be a few highlights in the 1980s as well, with Dale Murphy emerging as a star and the Braves winning the 1982 division title. However, the Braves did not establish a consistent level of dominance until 1991, when they won their first of 14 consecutive division titles. The Braves won six of those 14 titles while playing at Atlanta Fulton-County Stadium, making World Series appearances in 1991, 1992, 1995 (their lone win in that stretch), and 1996.

As a result, Atlanta-Fulton County Stadium was the site of some of the franchise’s most memorable moments. It was there that the trio of Greg Maddux, Tom Glavine, and John Smoltz began their run dominance; it was also there that future Hall of Famer Chipper Jones emerged on to the major league scene, and where Fred McGriff made an immediate impact after being acquired from the San Diego Padres in a crucial July 1993 trade.

While the Braves’ success gave Atlanta-Fulton County Stadium a memorable run, it was not enough to stave off an inevitable end for an aging facility. Seeking their own home, the Falcons left Atlanta-Fulton County Stadium after the 1991 season in favor of the new fixed-roof Georgia Dome. The Braves, meanwhile, were seeking their own home as well, and the 1996 Olympics ultimately yielded a solution.

Centennial Olympic Stadium was constructed across the street from Atlanta-Fulton County Stadium to host the games and was intended to be converted into a ballpark after the Olympics. That was ultimately what happened, as the Olympic Stadium was converted into Turner Field prior to the 1997 season and was the home of the Braves for the next 20 seasons.

With both the MLB and NFL teams in their own homes and no viable use in place, Atlanta-Fulton County Stadium had become obsolete. It was demolished in 1997, largely to make way for parking for Turner Field. However, a few reminders were put into place, and future redevelopment could bring baseball back to the site. In the years since its departure, Atlanta-Fulton County Stadium has been commemorated with a fairly elaborate dedication. An outline of the playing field was installed on the site, providing a representation of how the facility looked in its baseball configuration. The section of the outfield wall over which Aaron hit his record-breaking 715th home run remains in place, with a plaque above the wall noting the achievement.

It is expected that the site will be redeveloped from a parking lot into city blocks that include new development. Georgia State, meanwhile, could construct a new baseball facility on the site. While much about the scope and details of the project remain to be seen, any baseball venue at the site could surely include some tie-ins that honor the history of Atlanta-Fulton County. Such plans would also reflect the ongoing efforts of Georgia State and their project partners, as the goal has been to create new mixed-use development that ultimately better connects the former Turner Field—now Georgia State Stadium—site with downtown Atlanta.

Over time, that could significantly change the legacy of the Atlanta-Fulton County Stadium by making it an active baseball site once again. While it could take time for any plans to come together, the legacy of Atlanta-Fulton County Stadium site already provides strong reminders of the facility and could continue to do so in the future with new development.