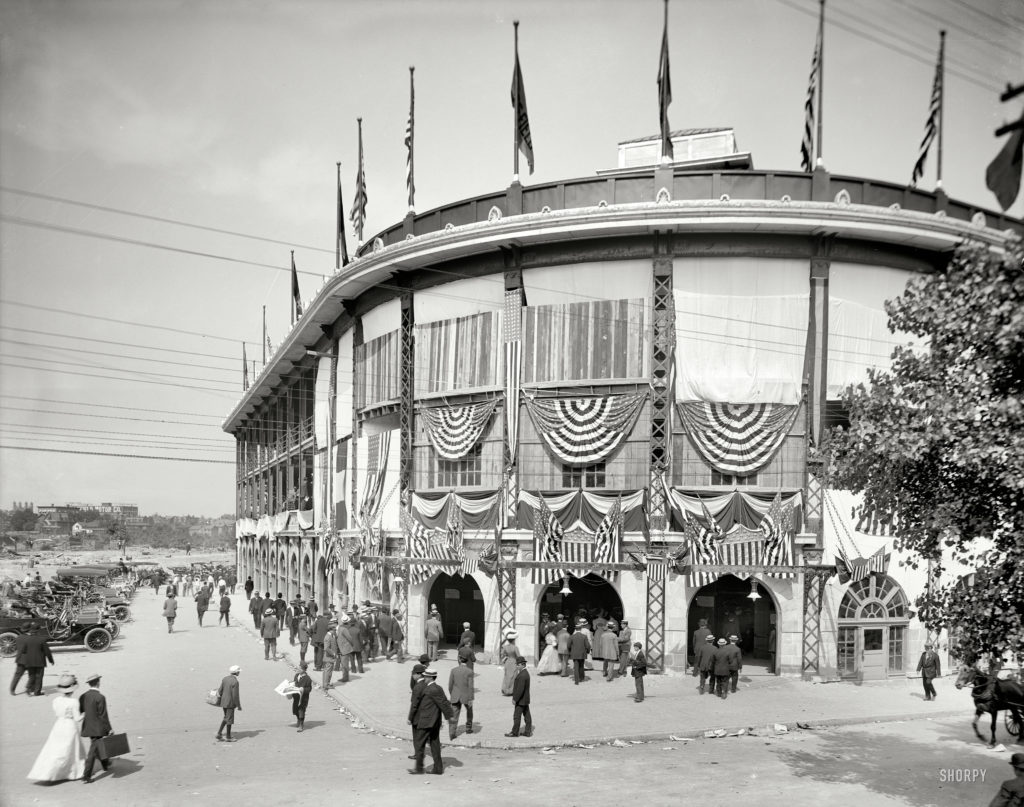 Over its decades of use by the Pittsburgh Pirates, Forbes Field was the site of many of baseball’s most memorable moments. In 1970—like many teams during did during that era—the Pirates departed their classic ballpark to move into a new multipurpose stadium, leaving much of Forbes Field to be demolished. Today, however, reminders of the ballpark remain on the site, giving an instant connection to baseball’s past.

Forbes Field opened as a marvel. Pirates owner and future Hall of Famer Barney Dreyfuss envisioned a ballpark that was both larger and more intricate in scope than Exposition Park, where the Pirates played until Forbes Field debuted. The result was one of baseball’s first concrete and steel ballparks, and it that stood out for its large size and ornate design details.

The ballpark opened on June 30, 1909, with the visiting Chicago Cubs defeating the Pirates 3-2 in front of an announced crowd of 30,338 at the 25,000-seat park. Aside from the opening of Forbes Field, the 1909 season proved to be a special one on the field for the Pirates, who advanced to the World Series and defeated the Detroit Tigers to claim their first title.

That set the tone for what proved to be a memorable stretch of decades of baseball at Forbes Field. Forbes Field was home to the Pirates for three of their World Series seasons, including 1925 and the 1960 campaign that ended with Bill Mazeroski belting a walk-off home run in game seven of the World Series to defeat the New York Yankees. It was also there on May 25, 1935 that Babe Ruth hit his final three home runs. Decades later—April 17, 1955, to be exact—Forbes Field was the setting for the beginning of baseball legend Roberto Clemente’s career.

While it was the site of plenty of iconic moments that gave it a historic standing, Forbes Field’s look and feel allowed it to become something of a legend within ballpark circles. Forbes Field—along with Philadelphia’s Shibe Park—helped introduce to Major League Baseball an era of modern concrete-and-steel, multi-deck ballparks that would set a standard around the sport. The Pirates made their final appearance at Forbes Field on June 28, 1970, sweeping a doubleheader against the Chicago Cubs. This was the beginning of the end of Forbes Field. A section of the ballpark would catch fire on December 24, 1970, and another fire occurred in 1971. The process of demolishing the ballpark was completed later that year.

Today, much of the site is occupied by the University of Pittsburgh’s Posvar Hall. However, there are reminders of Forbes Field both outside and inside of the building. On the ground level of Posvar Hall, Forbes Field’s home plate is embedded in a case. The plate is located near the original site of home plate, but not in its exact location. (While some claims suggest that the actual home plate was located in what is now a women’s restroom, another finding has indicated that home plate is outside of the economics library—about 81 feet from the embedded dedication.)

In addition, the site includes a portion of the left to left-centerfield outfield wall. Along with the wall, the site features the original flag pole from the ballpark. Reminders of Forbes Field can also be found at the Pirates’ current home, PNC Park. After Forbes Field closed, a section of its left field wall—over which Mazeroski’s triumphant 1960 home run sailed—was preserved and relocated to Three Rivers Stadium. It was located in a club area there until the venue’s closing and, after spending several years in storage, was installed by the Pirates at PNC Park and is currently displayed as part of a statue of Mazeroski.

Forbes Field certainly built an impressive history over the years, and served the Pirates well until the team decided to move into a more modern venue. Decades after leaving Forbes Field, the Pirates find themselves at PNC Park—a ballpark that has been hailed as one of the best of its era—and yet, plenty of reminders of Forbes Field’s legacy can be seen around Pittsburgh.