You are here: Home › Nationals Park Preps For an ASG Spotlight
By Zach Spedden on June 13, 2018 in Major-League Baseball, News, Visits Nationals Park will host one of the most high-profile events in its history when it welcomes the 2018 MLB All-Star Game next month. The home of the Washington Nationals has seen some changes inside and outside since its 2008 opening, and its fan features will make it a fitting venue for the Midsummer Classic.

Nationals Park is not necessarily a ballpark bolstered by its aesthetics—it does not seem to have a signature design feature that could emerge as iconic, and its more modern look bucks the trend of many retro-style ballparks that preceded it. What it does, however, is build off its strengths to create a fan experience that in hindsight now appears to be ahead of its time.

One current trend in ballpark design is social spaces, with plans for new or renovated facilities finding ways to incorporate areas where fans can gather and view the game in a non-traditional setting. Nationals Park has embraced this concept since its opening, with the many drink rails located around the ballpark and a large area in center field—currently featuring the Budweiser Brew House and Bud Light Loft—traditionally serving as a popular destination for fans. 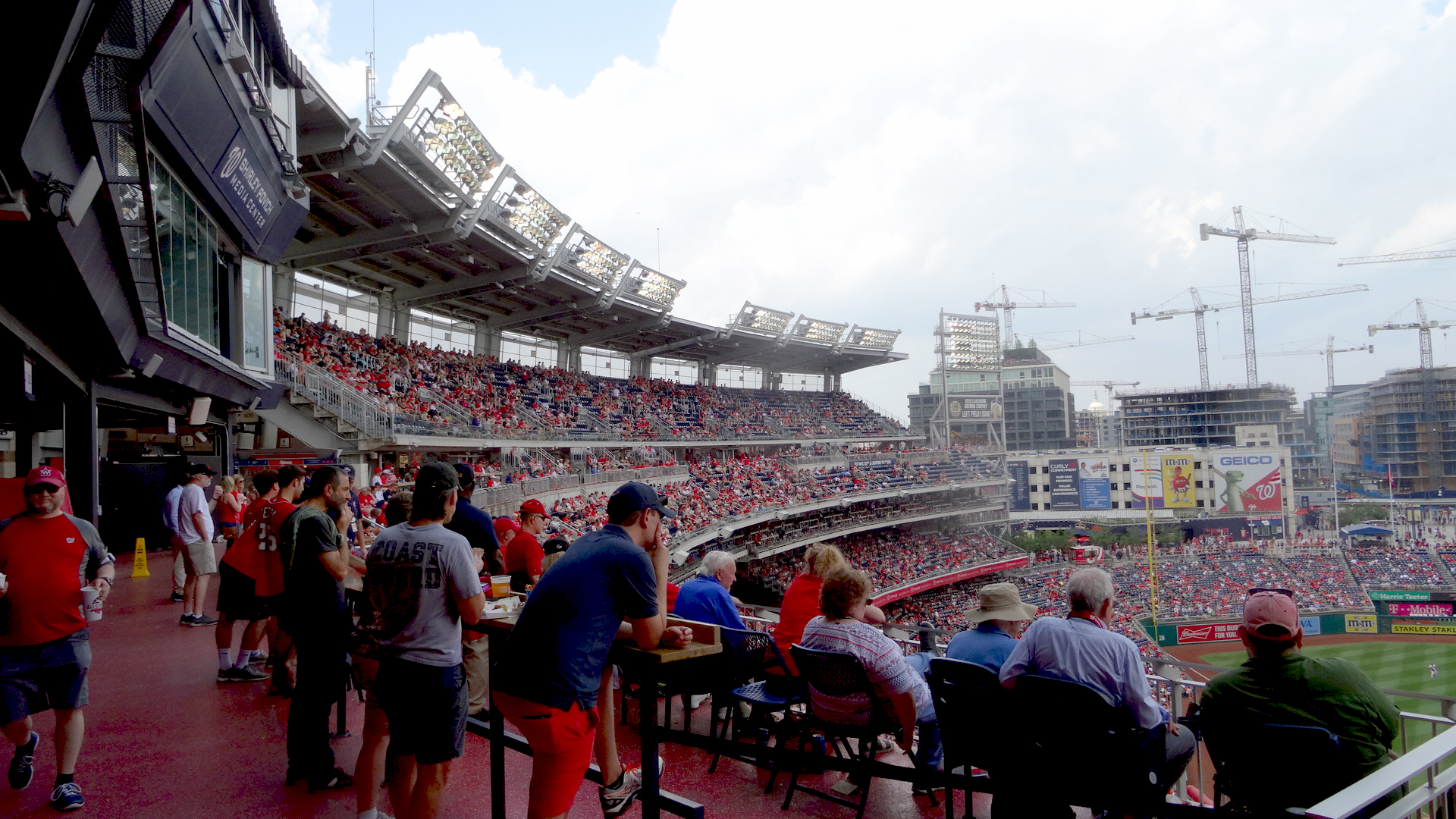 Over the years, the team has made some changes that build on this concept and effectively mix up Nationals Park’s food and beverage options. The Devils Backbone Left Field Lodge offers unique viewing areas, along with a mix of beer options that includes the Nationals-branded Earned Run Ale (our 2018 preview of Nationals Park took a closer look at the relationship between the Nationals and Devils Backbone).

The incorporation of social spaces has provided Nationals Park with an advantage in being able to offer a multi-faceted fan experience. It has also allowed the ballpark to take some creative measures with food and beverage offerings in recent years, as a variety of cocktail selections have given fans choices beyond the traditional beer options (the aforementioned preview also notes the ballpark’s cocktail selection). Measures to shakeup the fan experience are extending beyond the ballpark’s interior, however, as the area around Nationals Park is seeing considerable development. Timing was an issue for Nationals Park when it opened, as the Great Recession was a factor in stalling economic activity. Over time, however, the area has seen more development in the form of options that include dining spots, residences, hotels, and other features.

Parts of that development are still works in progress, so construction around the ballpark will continue as new amenities take shape. Still, fans attending games at Nationals Park this season will find some options for destinations before and after the game, while the nearby Navy Yard-Ballpark Metro Station makes the facility more accessible from other destinations around the city. Essentially, the experience of attending a game at Nationals Park in 2018 is much different than the experience would have been in 2008. The Nationals have made tweaks to their operations to provide unique offerings around the ballpark, while building on the facility’s existing strengths to embrace the social aspect of the fan experience. Continual development in the surrounding area also gives gameday attendees more ways to add to their experience, offering pre and post-game destinations that did not exist when the ballpark first opened.

Nationals Park will be in the spotlight in July, and the ballpark should be up for the task of giving fans a good experience during the All-Star Game. It is also, perhaps more importantly, able to provide a good gameday atmosphere on a season-long basis that has the potential to improve over the coming years.