You are here: Home › The Force Awakens…In Minor League Baseball
By Jarah Wright on April 26, 2018 in Features, Minor-League Baseball, Promotions 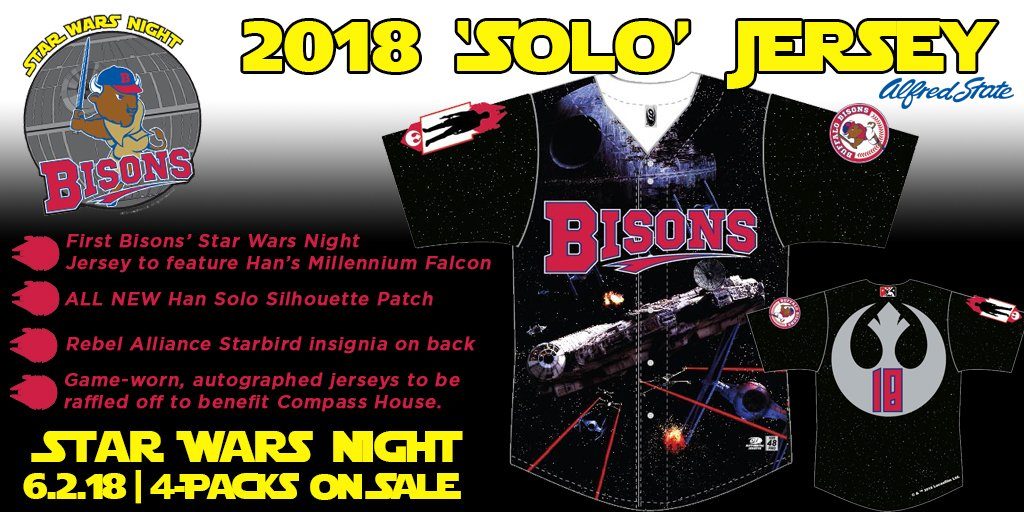 A long time ago in a galaxy far, far away….you know the rest. Eleven seasons ago and in two ballparks in different parts of the country, the idea for Star Wars nights began to take shape.

For Anthony Sprague, the assistant general manager of the Buffalo Bisons (Class AAA; International League), Star Wars seemed like a great promotional idea after seeing a team put one together the previous season.

“I’m a huge Star Wars fan and I went to my boss at the time and thought it would be a cool thing to do,” Sprague said. “The West Michigan Whitecaps had done a Star Wars night the previous season, so I talked to them and they pointed me in the right direction and who to call.”

That call led to Lucasfilm and a business relationship that has prospered over the years.

“We talked to the people over at Lucasfilm, told them what we’d be doing, and got approvals through them and Minor League Baseball,” Sprague said. “It was simpler 10 years ago because not as many teams were doing it and we were able to build those relationships. They’ve seen how we do things and that we do it the right way. Because of that relationship, they have allowed us to continue to do some things that other teams aren’t allowed to do any more like an on-field show with their characters and videos put together by the 501st Legion.”

After speaking with Lucasfilm and the 501st Legion, the decision was made that the 2018 Star Wars Night on June 2 will focus on Han Solo with the release of the movie Solo scheduled towards the tail-end of May.

“We’ve always tried to work with them on what they want to promote. We’ve never really had the opportunity to help them besides building their brand because most of the movies have come out in December,” Sprague said. “It’s exciting that we can help promote Solo as part of that partnership. Our jerseys this year are Han Solo-themed and with their permission we’ll show the trailer for the movie on the videoboard.”

Another business relationship that has helped enhance the event over the years is the team’s relationship with the 501st Legion, which puts together its own videos and in-game show.

“We collaborate and ask what they want to do each year. These guys start writing the script and shooting within a few weeks after the previous year’s event,” said Brad Bisbing, the Bisons director of marketing & public relations. “They come and shoot scenes at the ballpark about a half dozen times during the off-season. We have about eight half-innings dedicated to these storylines and clips and it’s amazing because the fans as so into it. As soon as one of the clips starts playing, the entire ballpark of 18,000 people goes silent. Conversation goes away because people want to see these videos and how it’s changed from last year and how it leads up to the on-field show. It’s detailed, painstaking work that the 501st puts into it so that it will be entertaining, follow brand guidelines, and is something for our fans to look forward to.”

Another idea the group was able to help execute is a life-size Jabba the Hutt.

“Jabba the Hutt is something they had talked about doing for years,” Sprague said. “It was massive. It took people to man and a lot of space on the concourse.”

The event has grown significantly over the years to the point where it has sold out for the past four years and demand to meet the characters has been so high, the Bisons now offer packs allowing fans into the ballpark before the gates are scheduled to open.

“The response to this night has been overwhelming,” said Bisbing. “Whenever we put packs on sale, the initial rush is the top-selling game the first day we put tickets on sale. It outsells Opening Day and even the Independence Eve celebration.”

The event’s popularity has led to the Bisons working on ways to help the flow of fan traffic on the concourse with thousands of people vying to see their favorite characters.

“We have looked at ways to revamp the flow for fans especially when they want to meet the characters,” Bisbing said. “Jabba the Hutt will be back again this year and hopefully every year and we figured out logistically how to make that work. Last year was a struggle. So many people wanted to see him because he was massive and new.”

With another Star Wars night on the horizon, Sprague looks back to the first night and said they’ve come a long way from the first promo night.

“We could have never gotten to this point without Lucasfilm even prior to when they were owned by Disney. The relationships we created there have gotten us to where we are today.”

Another team was bitten by the Star Wars promo bug at the same time in the form of the Omaha Storm Chasers (Class AAA; Pacific Coast League). A huge Star Wars fan himself, Storm Chasers president and general manager Martie Cordaro says he had been eyeing a Star Wars night to bring the fandom to the masses.

“I’ve been a Star Wars fan since I was four when my dad took me to see the first Star Wars movie so I’ve been a fan a long time. I even have a life-size Yoda in my office that we now use as part of our Star Wars nights,” Cordaro said. “We have a promotion where we take photos of Yoda around the ballpark. If fans know where in the ballpark he is, they go to fan services, and if they are the first one to get the right answer, they win prizes like Black Series action figures and this year we have some larger vehicles and ships as prizes.”

The Storm Chasers’ first Star Wars night was on August 1, 2008 (when the team was still known as the Royals) and has grown in popularity since then. So popular in fact, that the event has moved up the promotions calendar as the years have passed.

“We originally did it in August as a late-season promotion that would garner a lot of interest. The first year we did it in May, to be closer to May the Fourth, was in 2012. We always have the promotion on the Friday closest to May 4th.”

In 2016, the Storm Chasers sold out its Star Wars night for the first time and came close to doing the same last year. The team is expecting a good crowd again this season, as they plan to wear X-Wing Pilot jerseys on May 4 to benefit the Methodist Health Foundation. Cordero said the team tries to find ways to include activities that engage both the old and new Star Wars fans.

“It’s a nod to both the current and the past. At the end of the day, you basically have three eras of Star Wars fans,” Cordaro said. “I grew up with the original trilogy. My 22-year-old grew up with the second trilogy and my nine-year-old is growing up with the new films now.”

Cordaro added that it’s why Star Wars is such a wonderful promotional night to have on the calendar each year.

And even if you’re not a Star Wars fan, having a Star Wars-themed night is another way to bring the community together.