You are here: Home › Fifty Years Ago: Designing Angel Stadium
By Kevin Reichard on April 14, 2016 in History 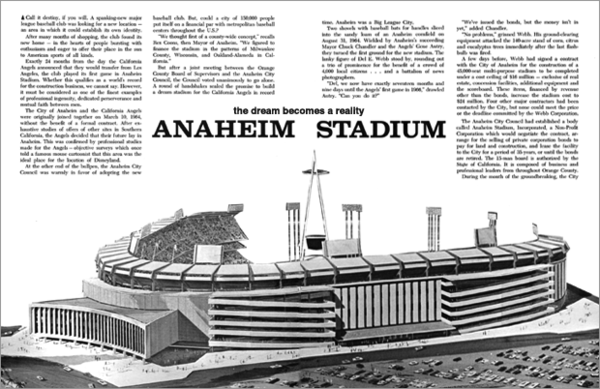 In the early 1960s, California was the land of perpetual sunshine, an oasis of progress and optimism promoted on television and movies. With Walt Disney’s park vision in place, the Los Angeles suburban sprawl turned Anaheim into a boom town – a growth that spawned Anaheim Stadium 50 years ago.

Angel Stadium – the current name of the old Anaheim Stadium – opened some 50 years ago, on April 19, 1966. At a time when Shea Stadium and the Astrodome represented the cutting edge of ballpark design, Anaheim Stadium was in a sense an old-fashioned ballpark before retro was cool. No roof, no circular design: just a boomerang grandstand owing more to County Stadium or Yankee Stadium than Shea Stadium. California cool.

The Angels were created under hurried circumstances, as the founding of the outlaw Continental League forced the hand of MLB owners into a quick expansion that sought to coopt owners and leaders like Joan Whitney Payson and William Shea while solving problems for owners like Calvin Griffith and keeping the best markets in the existing majors.

Demographics were pretty clear on where Major League Baseball should expand: New York City was obviously able to support another team, as was Los Angeles. The National League was in Los Angeles; the American League in New York City. In the spirit of compromise, the National League expanded with the New York Mets, and the American League was expanded with the Los Angeles Angels. The Senators were added to keep baseball in the nation’s capital – seen at the time as a political necessity – and Houston snared that final expansion team, despite many in baseball seeing Dallas-Fort Worth as the worthier market. Strong ownership, in the form of Judge Roy Hofheinz and Bud Adams, gave Houston the edge.

Putting a team in Los Angeles was a leap of faith, even though there was no established owner, a Dodgers ownership skeptical of sharing the market, and an aging facility in the original Wrigley Field at 42nd and Avalon. But the leap faith paid off: A solid owner was found in singing cowboy and media mogul Gene Autry (chosen over Bill Veeck and Hank Greenberg), a temporary ballpark was located after a one-year use of Wrigley Field, and a front office of Fred Haney, Rollie Hemond and Bill Rigney put together a surprisingly competitive team.

But, as it turns out, it was easier to put together a baseball team than come up with a ballpark plan. After a few years of false starts that saw the team set up shop at Dodger Stadium – Chavez Ravine, in Angels-speak – a ballpark solution emerged when Anaheim city leaders decide dthey were ready to break out as a major city. And every major city has major-league baseball.

At the time Anaheim and Orange County was mostly rural farmland and citrus groves, but there was one major attraction at play: Disneyland drew major crowds to Anaheim and gave city leaders a taste of the big time. The agreement between the city and the Angels was finalized on March 10, 1964 and Anaheim Stadium took less than 24 months to build. The site: 140 acres of “corn, citrus and eucalyptus trees,” according to a team history of the project. Anaheim was small – some 150,000 residents – but on the map, thanks to nearby Disneyland and the new ballpark. The plan: a 45,000-seat multipurpose stadium costing $16 million, backed by city bonds. Total cost of the project: $24 million, including real estate, scoreboard, concessions and additional equipment.

There were some ties to other MLB teams. Anaheim Stadium was built by the Del Webb Corporation; Del Webb owned the New York Yankees with Dan Topping, but his interest wasn’t purely in baseball, but rather in building large projects. The whole notion of a retirement community can be traced to Webb’s Sun City, as can the notion of a modern Las Vegas: he built the original Flamingo for Bugsy Siegel before buying the downtown Mint. On the ballpark front, Webb landed the contract to expand Kansas City’s Municipal Stadium for the relocating Athletics as well as the deal to alter the Los Angeles Coliseum for the relocating Dodgers.

Landing the Anaheim Stadium contract was only fitting: Webb led the charge to place an American League team in Los Angeles after the National League sought a team in New York City. As a result, Anaheim Stadium was the gift that kept on giving for Webb: Canteen Corp. – the concessions firm owned by Topping, Webb and Athletics owner Arnold Johnson – landed the Anaheim Stadium food and beverage contract. (More on that in a bit.) And the market was very good for Webb: his firm was also responsible for the $12-million Anaheim convention center constructed at the same time.

But Anaheim Stadium, it must be noted, was a more successful project than either of the retrofits. That may have come from architect Nobel Herzberg, who also also worked on D.C. Stadium (now RFK Stadium) and before that a project manager on prior Yankee Stadium renovations. His design for Anaheim Stadium borrowed some elements from RFK Stadium, the first true multiuse stadium in professional sports. Though the Angels were the main tenant, Anaheim Stadium was designed to host pro football with addition of moveable grandstand on huge pneumatic tires, upping capacity to 56,000. It opened with a football press box on third-base line, paralleling the football gridiron.

“I’m much impressed,” commented Tom Liegler, the Webb project manager for both the ballpark and the convention center, whose experience including work on the Astrodome construction. “This isn’t going to be the biggest stadium in the world. It doesn’t have a plastic dome, because we don’t need one in Anaheim. But this stadium will succeed from its opening day because it tops all the others in one important aspect. Anaheim Stadium was designed for the fan!” When it opened, Anaheim Stadium was afloat in a sea of parking next to major freeways, with enough room to hold 12,000 automobiles. (Like Dodger Stadium, fans were directed to park in the lot closest to their seats; the lot name was printed on the ticket stub.) You could see the place from quite the distance, thanks to the memorable Big A scoreboard. It was 23 stories high, costing a cool million dollars and two times higher than other Orange County buildings. It was profitable immediately for the Angels and Anaheim, thanks to a 10-year Standard Oil of California (Chevron) marketing contract. And, for its time, it was a computerized marvel, complete with animated effects and up to a thousand facts, statements and other pieces of information stored in the memory system.

The Big A wasn’t the only technological marvel at Anaheim Stadium. The Hammond X-66 organ was billed as a “space-age” instrument, an electronic powerhouse that could mimic the world’s largest pipe organ while also supplying a wide array of special effects. Manning the X-66 in the soundproof glass booth in the press box: former Chicago White Sox organist Shay Torrent. If all this entertainment wasn’t enough, fans could retreat to one of the public dining spots in the ballpark designed by Herzberg and run by Canteen Corp. (which would eventually become Centerplate). The Anaheim Stadium Club was a private venue, which featured separate themed dining spaces, while the Anaheimer was open to all, in Herzberg’s original plan. There was a decent variety of food at the ballpark at specialty Mexican, Italian and German stands.

The vision of Anaheim Stadium as an open, airy facility played out until 1979, when the ballpark was enclosed to accommodate Los Angeles Rams football. And though the ballpark was later opened up by Disney under a plan from Robert A.M. Stern and Populous, it wasn’t the same: that original California vibe so present in the original Anaheim Stadium was forever gone. Now, after 50 years, the future of Angel Stadium is far from assured: there are some pressing renovation needs of the most unglamorous sort, and the Angels have been open about seeking a new home. Some would love to see a new ballpark next to the old one, and other cities in the area have reviewed the financial commitment needed for a new ballpark. The one option that no one seems to be discussing is another round of renovations to Angel Stadium, and that’s a shame: when fans are seeking an authentic ballpark experience, the real thing is in Anaheim.