You are here: Home › On tap this weekend: an inside look at Blue Wahoos AirBnB experience
By Kevin Reichard on October 20, 2020 in Minor-League Baseball, Promotions 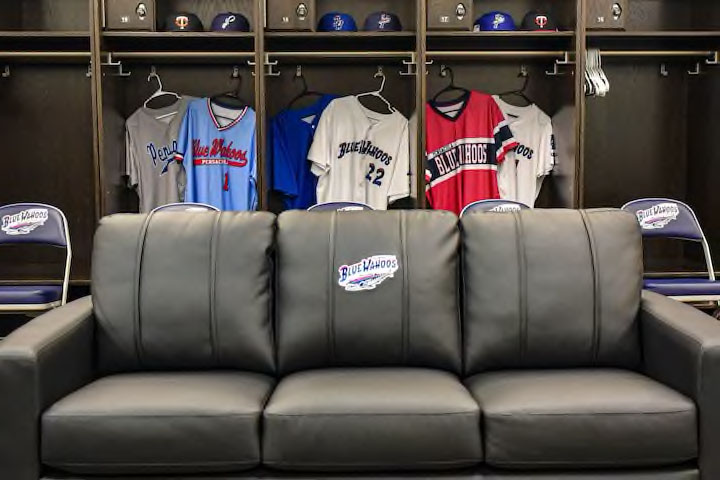 Worth seeking out Saturday morning: NBC’s Weekend Today show is slated to run a behind-the-scenes segment on the Blue Wahoos Stadium AirBnB experience offered this summer.

At $1,500 per night, the Blue Wahoos Stadium AirBnB experience was developed in response to the cancellation of the 2020 MiLB season in the wake of COVID-19. The experience opened by the Class AA Southern League Pensacola team featured run of the ballpark, including the newly renovated and fully furnished clubhouse, a large bedroom with 10 beds, the batting cage, and the playing field. The experience covered everything available to players and more, including videogames in the clubhouse, breakfast at home plate and more. The newly renovated clubhouse at Blue Wahoos Stadium includes four leather couches, two flat screen TVs, a ping pong table, padded chairs, and two large tables. Two bathrooms with showers are connected directly to the clubhouse. The large bedroom is connected directly to the clubhouse and has four bunk beds and two queen-sized beds, allowing 10 to sleep comfortably.

In June an eight-person group from Salt Lake City and Dallas checked into the Blue Wahoos Stadium AirBnB in a visit documented by NBC, per the Pensacola News-Journal:

The segment on the Hutchings’ family stay at the Blue Wahoos’ Airbnb is expected to air Saturday during a time slot between 6 and 8 a.m. on “Weekend Today.” The NBC production duo of Bill Angelucci and Anthony McGowan filmed hours of video in two days last week during the guests’ stay.

They were joined by veteran NBC news correspondent Catie Beck, who interviewed the brothers and met with Blue Wahoos owner Quint Studer.

“It takes something special for a story to make it to this level and the fact this did is pretty remarkable,” said Beck, who pitched the story to NBC executive producers, after reading about the Blue Wahoos’ Airbnb setup earlier in the summer. The “Weekend Today” program allows longer video feature segments.

As always, check your local listings.