You are here: Home › Push Continues on Snappers Ballpark Plan
By Zach Spedden on October 11, 2019 in Future Ballparks, Minor-League Baseball 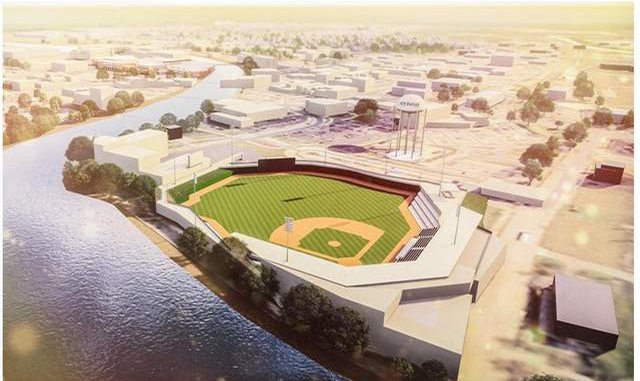 Two weeks ago, it was revealed that the Snappers are being sold to Studer, a native of nearby Janesville and owner of the Pensacola Blue Wahoos (Class AA; Southern League). A sale to Studer, which is not finalized, would be part of plans to build a new downtown ballpark that will be located on a seven-acre city-owned property off Shirland Avenue, between the Rock River and Beloit Transfer Facility near the Beloit City Hall building.

There is still some work to be done in the planning process, including the finalization of a facility lease agreement with the Riverbend Stadium Authority–a yet-to-exist entity that would own the ballpark. Still, some progress has been since the potential sale to Studer was announced, making him hopeful that all elements of the transaction will be in place for final approval soon. More from the Beloit Daily News:

“We’d really like to have everything done as soon as possible,” Studer said. “We want to be out promoting the Snappers for next year and to hit the ground running.”

As of Wednesday, Studer said the only remaining piece to fall into place was a lease agreement with the Riverbend Stadium Authority, a group that’s aiming for nonprofit status and that will retain control of any new stadium. The plan calls for a $34.2 million project on a 7-acre site at 217 Shirland Avenue along the Rock River.

“I think both sides want it to happen as soon as possible, and we’ve done a lot of the preliminary work,” Studer said.

Shortly after Sept. 30, the asset purchasing agreement signed by the Beloit Professional Baseball Association President Dennis Conerton and Studer was sent to the Midwest League. On Monday, the Beloit City Council approved the reassignment of the current lease between the city and the association to Gateway Professional Baseball, whose managing president is Studer, according to the lease reassignment document. The Snappers are set to play the 2020 season at Pohlman Field, their home over the last three decades.

The sale of the Snappers is contingent upon approval of the Midwest League and Minor League Baseball (and, technically, by Major League Baseball, which never opposed franchise sales). A new downtown Beloit ballpark has been pitched as a way to further investment in the area, while simultaneously resolving the facility issues that have faced the Snappers at Pohlman Field. That is an important area for the team given that the upcoming 2020 Professional Baseball Agreement (PBA), which has not been finalized, is expected to impose stricter facility standards that ultimately put the franchise’s future in Beloit in question.