The crowd was reported at 7,125 at a ballpark with an official capacity of 6,631, but the ballpark was never jammed. Sure, there were some long lines at the concession stands, particularly for those thirsting for a beer, but those lines died down quickly once the game started, and overall traffic moved around the ballpark and its 360-degree concourse smoothly. Lines are part of every ballpark opening as fans initially navigate a new facility and game-day staff becomes acquainted with operations, of course. Amarillo baseball fans have been eager to see the return of affiliated baseball since voters approved public funding for a multipurpose event venue in 2015. That referendum approval led the Elmore Sports Group to the decision to move its Class AA Texas League team from San Antonio to Amarillo—a move that was part of a larger Elmore Group restructuring that saw the shift of a Class AAA Pacific Coast League team from Colorado Springs to San Antonio and the move of a Rookie Pioneer League team from Helena to Colorado Springs. (The unprecedented team moves earned the Elmore Sports Group our Organization of the Year citation in the 2018 Ballpark Digest Awards.)

Part of the rationale for the investment in a downtown ballpark was to spur economic development. A city master plan already in place when the ballpark was approved calls for new residential past right field, and the hope is that the ballpark will be a noteworthy amenity. And while that development remains to be seen, the ballpark succeeds as a major draw for Amarillo residents, with a homey Art Deco design that echoes other familiar design elements in downtown Amarillo. More notable: the Santa Fe Building just blocks away, opened in 1930 as the regional headquarters for the Atchison, Topeka and Santa Fe Railway company. It was a theme the ballpark’s architects at Populous were happy to embrace. “When we talked to the mayor and the city, they wanted to represent the Midwest Art Deco, which spreads from Chicago to Kansas City to Amarillo,” said Mike Sabatini, Senior Architect, Principal at Populous. Populous presented the city with three design schemes early in the process, and the Art Deco look was overwhelmingly the most popular.

As you can see from the above photo, the Hodgetown exterior is marked by a lighter cream-color brick, with several patterns deployed throughout the ballpark. It echoes the look of new development across Buchanan Street, as well as other civic structures in the area, including next-door City Hall and a new hotel. The striations in the brickwork are also designed to echo the landscapes at nearby Palo Duro Canyon State Park, billed as the second largest canyon in the United States. That effort to integrate the exterior Hodgetown design with existing landmarks is also echoed in its signature exterior feature: a multistory rotunda opening to Buchanan Street, shown at the top of this page.

“This is the major attraction when people come in—they’ll say, meet me at the rotunda,” Sabatini said. “We took a lot of inspiration from the deco downtown.” The friezes in the rotunda echo elements from other downtown deco-era buildings, with the gold-yellow colors certainly standing out. The ballpark club is on second level, overlooking the rotunda. But the rotunda won’t necessarily be the main point of entry for most fans. Buchanan is a one-way northbound street, and most of the ballpark parking is expected to be past the ballpark to the north. That why there’s another main entry on the other end of the ballpark, into a large concourse in the left-field corner.

Once inside, fans will find an agreeable spaciousness to Hodgetown. According to Populous’s Brian Simpson, the ballpark site is 9.3 acres—a large footprint for a Class AA ballpark. (By contrast, the footprint for El Paso’s Southwest University Park is just over 6 acres.) That makes for some wide concourses and ballpark amenities like onsite parking and a huge play area. Those wide concourses make for plenty of spots for fans to congregate—which is why an above-capacity crowd didn’t make for any discomfort. The Populous design features plenty of different seating options on the ballpark’s main drag—four tops tables in both corners and past the right-field berm, along with four concourse suites.

According to Sabatini, the emphasis was creating spaces where families could meet, whether it be six dugout suites behind home plate or the second-level patio suites, arranged with a center island. Operationally, Hodgetown features a standard concessions layout, with four permanent stands and several smaller specialized point of sale (featuring beer, hot dogs and other specialty items) in the grandstand concourse, and other specialty booths (Dickey’s BBQ, a Mexican cantina, Dippin Dots) in the outfield concourse. The four permanent concession stands have differing themes, such as a Panhandle Pizza stand, and the offerings are considering more elevated than your average ballpark fare. (Diamond Creations, an Elmore Sports Group firm, manages the concessions.) Also in the outfield concourse: The 352 Bar, named for its distance from home plate. While the ballpark footprint is large by MiLB standards, the left-field power alley is only 345 feet. But with the home-run wall and a large videoboard running from foul pole to center field coming it at 12 feet, there probably won’t be that many cheap home runs at Hodgetown. The 352 Bar is designed as a social space with views both of the action and other sporting events on the several high-def displays (the NCAA men’s basketball championship, featuring nearby Texas Tech, competed for the attention of fans at the 352). With cornhole, picnic tables and a drink rail overlooking left field, the 352 area was one of the most popular spots to see the Sod Poodles in action—a view well worth the $6 SRO ticket price. Lost in the shuffle on opening night was the large space housing batting cages right off the concourse. At roughly 2,000 square feet, this air-conditioned space opens to the concourse, with direct access to the first-level clubhouses. There are also windows opening to the street, allowing anyone to watch indoor batting practice. On a less crowded night, this space will probably stand out a little more. There are other ballparks with concourse-level batting cages—the most successful probably the setup found at Parkview Field, home of the Fort Wayne TinCaps (Low A; Midwest League)—and there are a few reasons why. First, fans love any window on what players do off the field in terms of preparation, so watching a player warm up in a batting cage is a treat. (Do not underestimate the appeal: when the Chicago Cubs upgraded Wrigley Field, they added windows to lower-level home and visitors batting cages to give club patrons a peek at the process. Rosemont’s Impact Field has group seating right in front of the home batting cage, on the field level.) The second argument for a concourse-level batting area: the space can be used for non-game-day events.

“Most minor league teams, they want to be able to utilize meeting rooms, the clubs and a variety of spaces,” Sabatini said, adding a caveat: the ballpark needs to be located in the right spot, like Fort Wayne. Or, say, in a prime downtown Amarillo location. 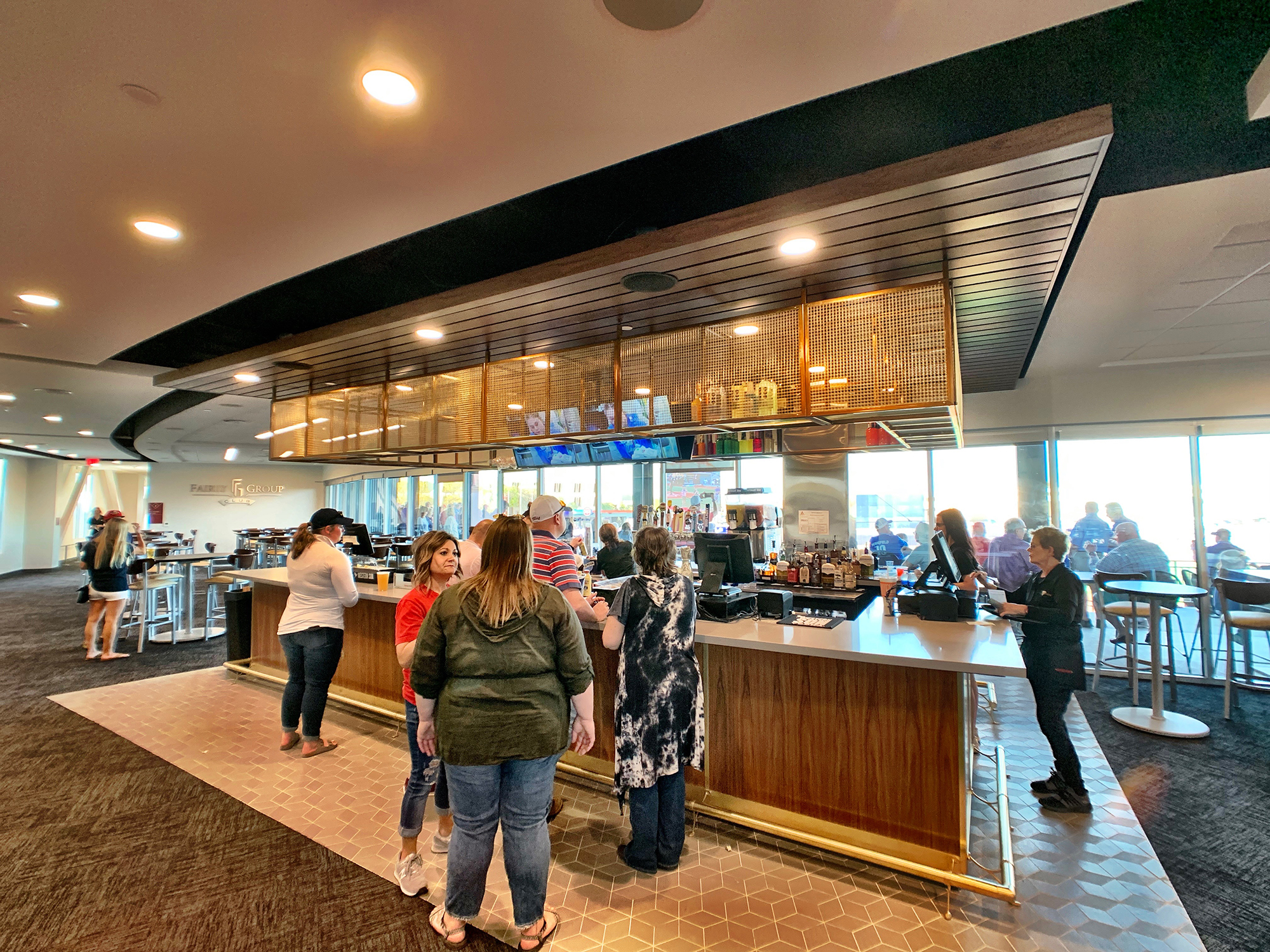 Speaking of the club: the second-floor suite level is anchored by a 6,000-square-foot club, with seating opening up directly (no stepdown) to outside seating. It’s designed as another group space that can also be used for outside events.

“They’d do wedding receptions, they’ll do banquets, and they’d do other events,” Simpson said. “One of the local Baptist churches is hosting Easter services here.”

Also on that second level: individual suites, as well as a super-suite that can be divided via partitions into three separate spaces. The individual patio suites feature an interesting design element: they are anchored with an island and seating.

“The idea is that it was designed around your kitchen, with the family gathering around a kitchen island, and then you could walk out on your patio,” Sabatini said. That means no stepdown to a deck with no fixed seating but plenty of four tops and outdoor furniture. In fact, the only seating in the sun represents the best seating in the house: six dugout suites, located some 45 feet directly behind home plate. Situated slightly below field level (which itself is 12 feet below grade), the six dugout suites are configured as an outdoor patio, with plenty of tables and four tops. They’re designed as family gathering spots. This area has been used as premium seating in other ballparks, such as Nashville and El Paso, but not to this extent. Being so close to the action is definitely a selling point for a high-end space. They’re also low enough, with the grandstand sitting high enough, that no one’s view is blocked by the dugout suites. Some other unique design elements worth noting: In the end, the Sod Poodles dropped their inaugural game at Hodgetown in extra innings. But with a great ballpark experience and some nifty post-game fireworks, we’re guessing most of the fans in the above-capacity crowd went home happy—and will be back for plenty more baseball this season and beyond.