You are here: Home › New Indianapolis Indians Videoboard to Dazzle Fans in 2017
By Kevin Reichard on March 30, 2017 in Minor-League Baseball, News 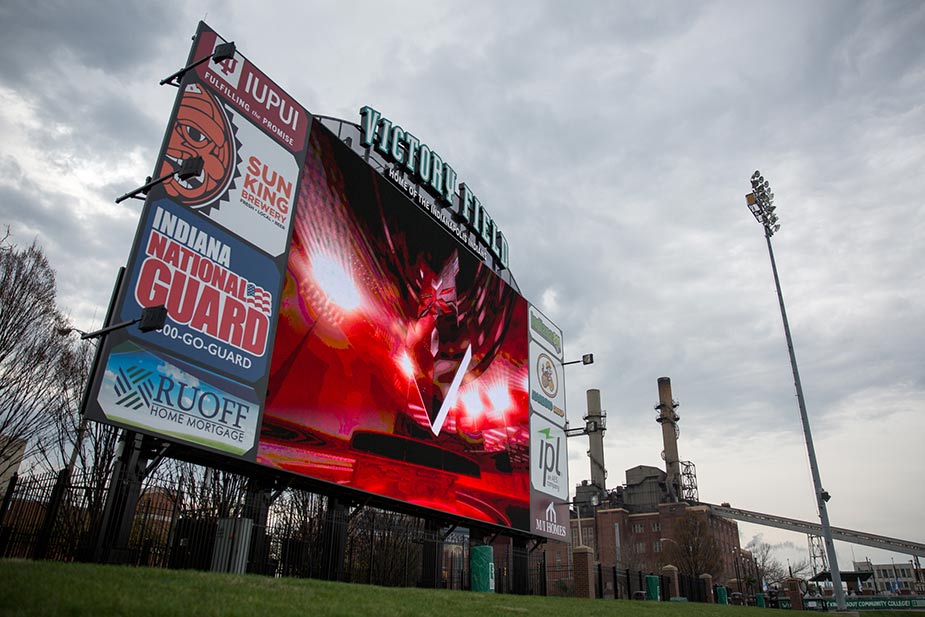 A new Indianapolis Indians videoboard at Victory Field is among the upgrades the Class AAA International League team unveiled for the 2017 season.

The large videoboard, shown above, is one of five new LED video displays at Victory Field. The displays were installed earlier this year.

“Daktronics has been critical to the game-day experience at Victory Field since our downtown ballpark opened in 1996,” Indianapolis Indians President and General Manager Randy Lewandowski said in a press statement. “For more than 20 years, Daktronics technology has been one of the most visible pieces of Indians baseball. The new video boards propel us into the future and reinforce how important the fan experience is to our organization.”

The main outfield video display measures approximately 35 feet high by 50 feet wide and features a 13HD pixel layout. It is capable of variable content zoning which allows it to show one large image or to be separated into multiple zones. These zones can then show any combination of live video, instant replays, scoring and statistic information, graphics and animations, and sponsor messages.

Two LED ribbon displays were installed along the fascia of seating sections at the facility. Each measure 4 feet high by 134 feet wide and show complimentary content to the main display, including up-to-the-minute statistics and game information while also providing the opportunity to highlight sponsors during events.

“We’re excited to be providing this LED video upgrade for the Indians at Victory Field,” said Ryan Stratton, Daktronics sales representative. “We provided our brightest 13HD product for this project that will bring a great view to fans for years to come. The new main video and ribbon displays, combined with the existing outfield fence display, will create an amazing atmosphere for baseball games. We’re looking forward to seeing everything in action when the first pitch is thrown at the start of the season.”

MLB Teams Roll Out Passes as Ticketing Options
Sounds, Express Schedule Battle for the Boot in 2017