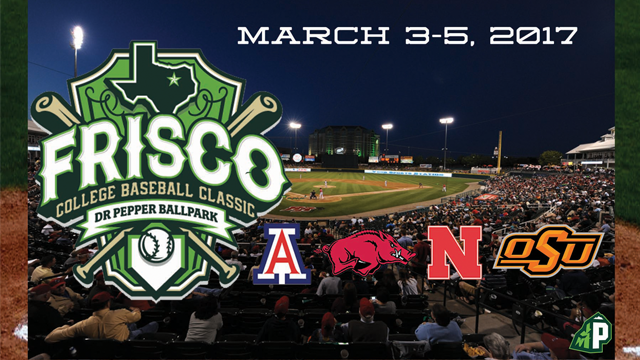 With spring training in its early stages, there is finally some baseball action underway. For many Minor League Baseball fans, however, the wait continues for a few more weeks, unless they happen to be near a ballpark that is hosting college baseball action. In this edition of Promotions Watch, we look at some upcoming college baseball matchups that will take place in minor league ballparks.

The link between college and minor league baseball has been strong over the years. Perhaps the most prominent example of this trend is shared facilities, as many professional and collegiate squads are playing out of the same ballpark. This year will see the addition of Buies Creek Astros (High A; Carolina League) and Campbell Fighting Camels to that mix, as the two teams will share Jim Perry Stadium for two seasons starting in 2017.

In more unique cases, college programs will head to minor league parks for games or a tournament.

The tournament landscape this spring includes some longstanding events, as well as some newcomers.

Two other minor league ballparks will be hosting a series of college games over this coming weekend. Multiple programs are heading to Fluor Field, the home of the Greenville Drive (Low A; Sally League), for games between March 3-5, including UT Martin, Presbyterian, Furman, Michigan State, Clemson, and South Carolina. Flour Field is set to host a wide variety of college games throughout the spring, including a Clemson vs. South Carolina matchup on March 4 and the SoCon baseball tournament from May 23-28.

The Cox Diamond Invitational will make its return to Pensacola this coming weekend, once again being played at Blue Wahoos Stadium. For this year, the event will feature Seton Hall University, University of South Alabama, Southeastern Louisiana, and Troy University. This should give the ballpark a good warmup before the Pensacola Blue Wahoos (Class AA; Southern League) begin their regular season.

One facility that will see plenty of college baseball this spring is BB&T Ballpark, the home of the Charlotte Knights (Class AAA; International League). When Appalachian State and N.C. Central face off on March 14, it will mark the first of several college games that will be played at the ballpark this year. Wake Forest and Charlotte will square off on March 21, followed by a matchup of Charlotte and N.C. State on March 28, and then Winthrop vs. Davidson on May 10.

Eastwood Field will host multiple college games in advance of the beginning of the Mahoning Valley Scrappers’ (Short Season A; NY-Penn League regular season of the) season. As recently announced by the Scrappers, Youngstown State will use the ballpark for two school day games—with the first scheduled for April 28 against Valporaiso University, followed by a matchup featuring Rider University on May 19. First pitch for both games is scheduled for 11:00 a.m.

This year, Trustmark Park is slated to host three college games as part of the Pearl College Baseball Showcase. It will start this month, when the home of the Mississippi Braves (Class AA; Southern League) hosts Mississippi State and Southern Miss for a matchup on March 21. Southern Miss will return on April 4 to face Ole Miss, which will be followed by a game between Ole Miss and Mississippi State on April 25.

On March 28, the Montgomery Biscuits (Class AA; Southern League) will feature a notable matchup at Riverwalk Stadium. The 2017 MAX Cap City Classic, featuring the University of Alabama and Auburn, will be the ninth installment of the game at the ballpark, and Auburn enters this matchup will a 7-1 record in the showcase. Last year’s event drew a total of more than 7,300 fans.

There are a handful of other ballparks that are slated to host notable college baseball matchups this year, with many featuring regional matchups. While some will be played before the minor league season begins, others are scheduled for later in the spring.

Arkansas will head to Dickey-Stephens Park—home of the Arkansas Travelers (Class AA; Texas League)—on April 19. In their matchup that evening, the Razorbacks will host the University of Memphis.

San Diego State University will make its third visit to The Diamond on April 4, when the Aztecs host UCLA. This will be one of two notable matchups to occur at The Diamond before the regular season begins, as the hometown Lake Elsinore Storm (High A; California League) will square off against the San Diego Padres in an affiliate vs. parent club contest on March 31.

As part of a pair of events from the university, Security Bank Ballpark will stage a game in which Texas Tech hosts New Mexico State on April 18. The home of the Midland RockHounds (Class AA; Texas League) will be the site of the second game the university sends to Midland, as Texas Tech football will host a spring scrimmage at Grande Communication Stadium on March 28.

Shrine on Airline (formerly Zephyr Field) will feature the Wally Pontiff Jr. Classic on April 11, when LSU squares off against the UL Ragin’ Cajuns. This will be played less than a week after the New Orleans Baby Cakes (Class AAA; Pacific Coast League) open their season at the ballpark on April 6.

Rounding out our rundown is a handful of notable games that will be played in the state of Tennessee. Vanderbilt is slated to play a pair of games at First Tennessee Park, the home of the Nashville Sounds (Class AAA; Pacific Coast League). The first of two games will be played against Belmont on March 21, followed by a game against Lipscomb on March 28.

This strong list of college games at minor league parks follows some events that have already taken place, including the Kleburg Bank College Classic in Corpus and the Caravelle Resort’s Baseball at the Beach in Myrtle Beach. It is safe to say, therefore, that 2017 will be another solid year when it comes to the number and quality of college games at minor league facilities.