The Binghamton Rumble Poines (Class AA; Eastern League) have announced a series of upgrades to NYSEG Stadium. Costing $2.5 million, the upgrades will take place before next season and aim to enhance both the fan and player amenities at the facility.

This announcement adds to a busy offseason for the former Binghamton Mets, who recently announced that they were changing their name to the Binghamton Rumble Ponies.

State senator Fred Akshar and New York State Senate Majority Leader John J. Flanagan secured $2 million in grant funds through the State and Municipal Facilities Program of the Dormitory Authority of the State of New York (DASNY). Evans St. Baseball, owner of the Binghamton Rumble Ponies, is contributing $500,000 for the project. Construction will begin immediately and is scheduled to be complete before Opening Day, April 13, 2017. 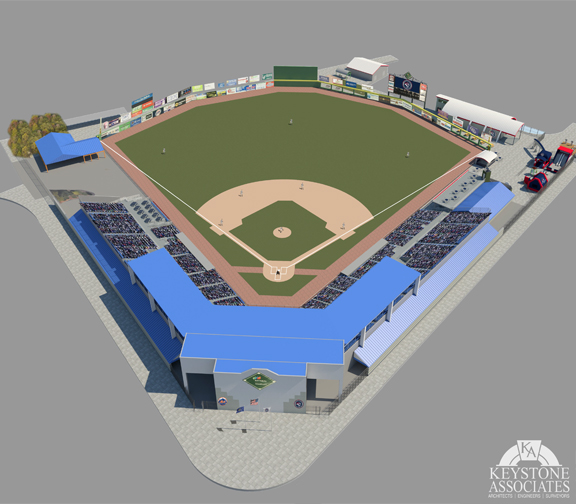 New Team Deck – 144 person picnic party deck built on the right field line that will provide fans with the ultimate viewing perspective for the best talent in Minor League Baseball. Hightop tables will litter the deck and covered seating will also be available. A new handicapped lift will provide better access to the deck and entire concourse.

New Third Base Terrace – Picnic tables and terrace family seating on the third base line, replacing existing seating in Sec. 15 and Sec. 17 allowing families and smaller groups to enjoy a comfortable and conversational setting at the ballpark. “Since 1992, NYSEG Stadium has been an integral part of the entertainment landscape enjoyed by our community’s residents,” said Senator Fred Akshar. “Senate Majority Leader Flanagan and Mayor Rich David have been incredible partners and I thank them for their support in helping keep baseball in Binghamton thriving. This project will build on our efforts to revitalize downtown Binghamton as a destination bursting with activity and fun for the whole family.”

“Our City, our entire community, reflects on the memories of this ballpark while writing a new chapter of Binghamton baseball history,” said Mayor Richard C. David. “Our project represents the most significant commitment to fans and this franchise since the stadium’s construction more than 25 years ago. Sen. Akshar has again delivered, bringing significant state resources to this City-owned facility. John Hughes and his staff, as well as the New York Mets organization, deserve high praise for their vision to improve NYSEG stadium and their dedication to this community.”

“Thanks to Governor Cuomo, Majority Leader John Flanagan, Senator Fred Akshar and Mayor David for their support in getting this project moving forward,” said Jeff Wilpon, New York Mets COO. “We are thrilled with the modernization of the Binghamton facility that will benefit fans, players and keep the team as part of the community for many years.”

“It’s an amazing honor to have this kind of community support as we grow NYSEG Stadium into a regional sports and entertainment destination,” said John Hughes, Binghamton Rumble Ponies owner. “Because of support from Mayor David, Sen. Akshar and Leader Flanagan, we are building an environment for fans to enjoy the best experience Minor League Baseball has to offer. Our investments in player development facilities will ensure the New York Mets have a stadium built to host their Double-A franchise for decades to come. This is the latest step on our journey to bring fun and excitement to the Rumble Ponies franchise. I look forward to seeing everyone next season in Rumble Town.”