You are here: Home › Best of the Ballparks 2016, Independent Baseball: TD Bank Ballpark
By Ballpark Digest Editors on June 27, 2016 in Awards, News 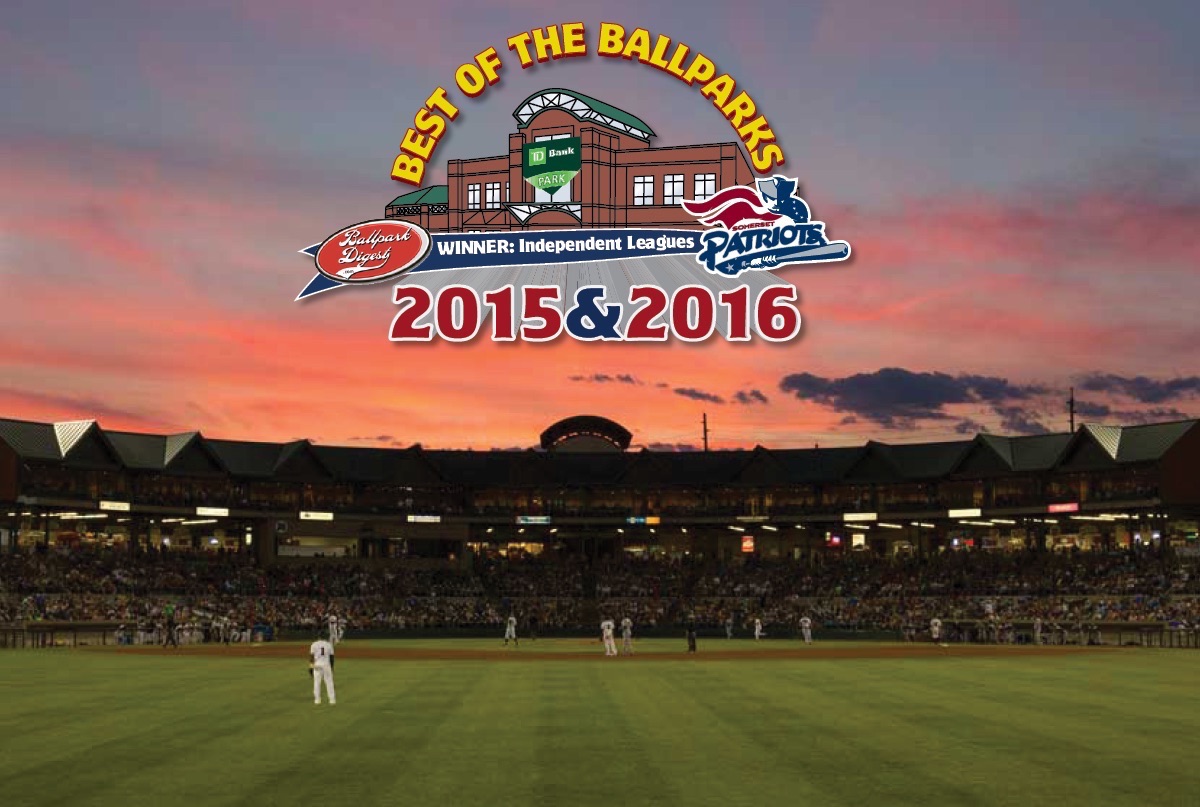 TD Bank Ballpark, home of the Atlantic League’s Somerset Patriots, was chosen for the second consecutive year as the best independent ballpark in Ballpark Digest’s Best of the Ballparks 2016 fan competition.

This is the second year for Ballpark Digest’s fan vote. No other ballpark repeated as fan favorite (to date) in 2016, underscoring how difficult it is to win back-to-back championships.

“Fans love TD Bank Ballpark, and they’re certainly willing to show it,” said Kevin Reichard, Ballpark Digest publisher. “Now that we’ve run this competition multiple times, we know how hard it is to repeat as the fan choice. Somerset Patriots fans love their team and love their ballpark.”

“We are honored once again to be voted as the Best Independent Ballpark by Ballpark Digest. This award isn’t just about the Somerset Patriots and our valuable staff, but equally about our great fans, marketing partners, Somerset County and the entire community,” said Steve Kalafer, Founding Chairman of the Somerset Patriots Baseball Club. “We strive to always provide the very best experience to everyone that has chosen to spend their valuable time with family, friends, co-workers and peers with us to make TD Bank Ballpark their home away from home.”

Ballpark Digest readers were asked to select their favorite ballpark in a bracketed tournament over five rounds. In the final round, fans were asked to choose between TD Bank Ballpark and Regency Furniture Stadium, home of the Southern Maryland Blue Crabs, in an all-Atlantic League conclusion to voting. The final round saw 4,855 votes cast: 3,481 for TD Bank Ballpark, 1,374 for Regency Furniture Stadium.

“We are humbled and appreciative of all those that took the time to vote to show their love for our home. The numbers speak for themselves of how much people care about TD Bank Ballpark. It was the vision of our ownership; and the Somerset County Board of Chosen Freeholders to build the ballpark in Bridgewater Township. Their vision is made a reality everyday by the families, businesses and organizations that have made TD Bank Ballpark the premier community gathering place in Central New Jersey,” added Somerset Patriots President/General Manager Patrick McVerry.

Over 94,000 fans have weighed in to date during the course of voting for ballparks in the Best of the Ballparks 2016 competition. Champions in Triple-A (Louisville Slugger Field, Louisville Bats), Double-A (Blue Wahoos Stadium, Pensacola Blue Wahoos), High-A (BB&T Ballpark, Winston-Salem Dash) and Low-A (Parkview Field, Fort Wayne TinCaps) were announced earlier this month. Voting for MLB and summer-collegiate ballparks are in the final round, while voting for Short Season A and Rookie ballparks opens this week.

Here are the final brackets for the competition: