As one of the newest facilities in MiLB and NCAA Division I, Monongalia County Ballpark has opened to plenty of hype. After our visit, it is safe to say the recognition is warranted, as it offers a fine experience for both the Morgantown Black Bears (Short Season A; NY-Penn League) and the West Virginia Mountaineers.

We’re talking some serious recognition here: The Granville, W.V. facility was voted by fans as the best ballpark at the short-season A level in our recent Best of the Ballparks competition.

The effort to bring professional baseball to Monongalia County began in 2012, when West Virginia University (WVU) partnered with the county to plan a new facility for the Mountaineers. While WVU needed the facility to bolster its baseball program, it was clear from the beginning that both sides were interested in attracting a short-season team for the summer months. Ultimately, the New York-Penn League agreed to move one of its franchises to the ballpark and announced last August that the Jamestown Jammers would relocate. Despite a series of severe winter storms that stalled construction, the stadium still opened in April for the Mountaineers and was ready to go when the Black Bears began play in June. Most fans access the ballpark through its main entrance in left field, with a ramp leading up to the main concourse. With its gentle slope and unobstructed view of the field, the ramp offers the first glimpse of the excellent sightlines around the ballpark.

Once inside, the stadium follows a template common to most new facilities. The main concourse sits above the seating bowl, with a press box and suite level providing cover. With just 3,500 seats, Monongalia County Ballpark features an intimate seating bowl that extends from dugout to dugout and is completely protected by netting. While some fans might take issue with the net, it is thin enough to not be a major obstruction. 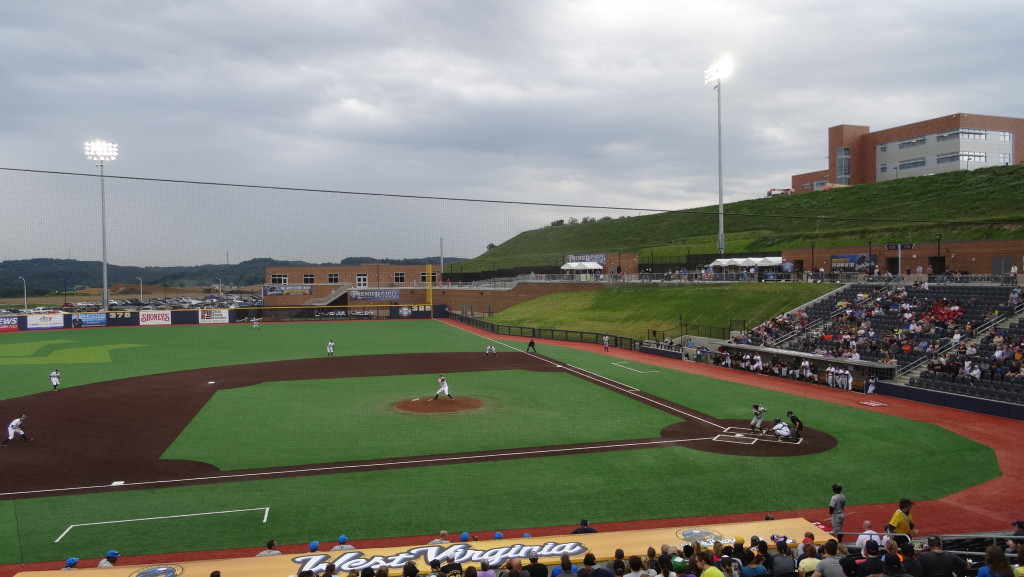 For fans in the mood to wander and view the action from multiple vantage points, Monongalia County Ballpark provides plenty of options—even though it does not feature a wraparound concourse. The concourse down the third-base side and behind home plate is wide enough that fans can stand without feeling too cramped, but the best option for standing room is down the right-field line. This side of the ballpark features a series of pub tables as part of a party deck extending completely down to the foul pole, where the plaza then curves around the outfield wall to provide standing room above the Black Bears’ bullpen. The first base side also features an excellent view of the University of West Virginia’s campus and downtown Morgantown. Though they were not open to fans during this visit, there will eventually be two berm areas—one on the end of each dugout—added to the general-admission options.

The concession stands feature standard ballpark fare at a reasonable price. Those in the mood for a good brew during the game have plenty of choices, as there are two craft beer stands down the first base side. Among the current options include beers from bordering states such as Maryland and Pennsylvania, as well as the local Morgantown Brewing Company. Souvenirs are sold in a small walk-in store on the third-base side. The stadium is located in Granville’s University Town Center, which is right off of Interstate 79. University Town Center features numerous shops and restaurants—mostly of the department store and chain variety—including a Wal-Mart near the stadium. At the time of this visit, construction for more development outside the ballpark was underway, including the construction of a new Courtyard by Marriott hotel across the street from the main entrance.

Since the only way in and out of the ballpark is through the town center, the area lends itself to relatively high traffic after the games. That said, following the night game featured in this story, the traffic flowed with ease and there were no tie ups on the way out. Much of this owes to the fact that the Black Bears have enough parking to avoid overcrowded lots. The parking options include VIP and pay-for lots right outside the stadium, as well as overflow spaces at Wal-Mart and the WVU medical facility—which is directly above the ballpark.

Monongalia County Ballpark is a ballpark that offers a simple and laidback experience, thanks to its favorable design and good sightlines. It is built to compete with some of the best facilities in Division I and Minor League Baseball, making it a good destination for any fan.

Why every baseball team should own a pizza bus
Best of the Ballparks: Former MLB Ballparks, Elite Eight