The Milwaukee Brewers announced 2015 Miller Park upgrades, including the addition of two new food stands and some upgraded concessions from Delaware North.

We’ve been pretty disappointed in the food at Miller Park the past few years, with unique items like poutine disappearing from the concessions and the Gorman Thomas BBQ stand downsized to selling routine concessions. Sounds like we weren’t the only ones disappointed, as the Brewers and Delaware North announced some significant food upgrades for the 2015 season. 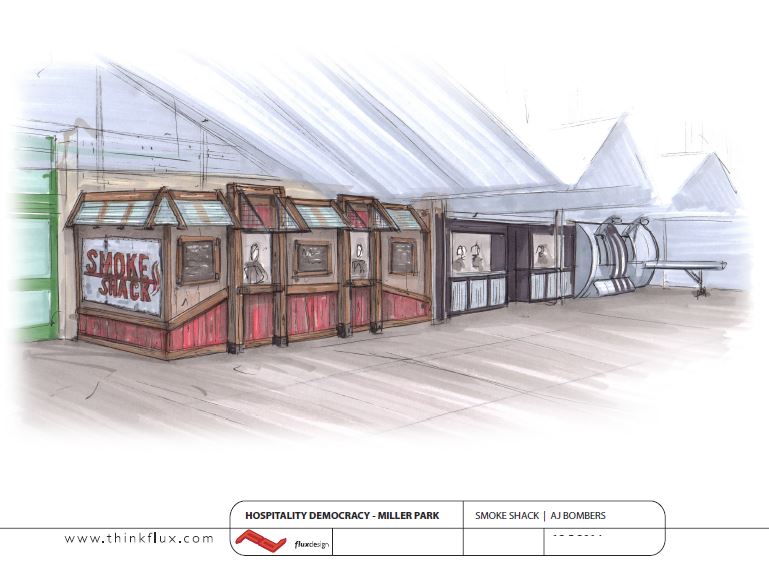 The two new food stands come from local food favorites Smoke Shack and Holey Moley. The Smoke Shack, offering slow-smoked barbeque, will be located on Miller Park’s Plaza Pavilion, and Holey Moley — Milwaukee’s only craft doughnut shop — will be along the first base side of the Field Level concourse.

Additional upgrades at Miller Park include a Season Seat Holder Headquarters, a Loge Level Ticket and Guest Relations Kiosk, enhancements to the JCI Club Patio, new food options at concession stands and increased Wi-Fi connectivity throughout the ballpark. These projects are in addition to the Selig Experience, which was announced in December.

“Each year we look to bring new amenities to Miller Park to enhance the overall ballpark experience,” said Brewers Chief Operating Officer Rick Schlesinger. “We are excited to introduce new and unique dining options this year, along with a designated headquarters for season seat holders, improved connectivity and additional attractions for our fans. Combining these additions with the new Selig Experience, we are confident that the fan experience at Miller Park will continue to be among the best in all of sports.”

Here’s a look at the two new stand:

Also new for 2015 will be several food options created by Miller Park’s concessionaire, Delaware North, located in various concessions stands throughout the ballpark. In addition to the standard ballpark fare and other returning offerings, Delaware North will unveil items for 2015 such as bratchos, bacon on a stick, Italian rope sausage, street tacos, and loaded tater tots, just to name a few. Bratchos is an epic combination of Klement’s sausages, kettle chips, cheese, fried sauerkraut, jalapenos and sour cream, all served in a Klement’s Racing Sausage bucket. In addition, baked potatoes will be featured in additional locations, with new topping options.

Set to open around the All-Star break, the “Selig Experience” will be located on Miller Park’s Loge Level in the left-field corner. A highlight of the attraction will be a multimedia presentation that tells the story of former Commissioner Allan H. (Bud) Selig’s role in saving Major League Baseball in Milwaukee, his successful efforts to bring the Brewers to the city, and his tireless efforts to promote and grow the game in his hometown. The signature part of the exhibit: a 3D encounter with Selig himself inside an authentic reproduction of Selig’s County Stadium office.