You are here: Home › New for 2012: Reading Fightin Phils
By Kevin Reichard on November 17, 2012 in Minor-League Baseball, News

At the end of the day, we’re pretty sure the fuss was unwarranted, but that doesn’t mean the new look is a success: the Reading Phillies are now the Reading Fightin Phils (Class AA; Eastern League), as the team opts to brand with an ostrich and a moniker ostensibly missing an apostrophe — while also emphasizing ties with parent Philadelphia.

There may be a reason the ostrich — as we’ll explain in a bit — but why drop the apostrophe (Fightin’ Phils, the correct way to do it) in favor of the Fightin Phils, or Fightins? A Fightin?

At least there’s a reason for the ostrich: it’s related to Crazy Hot Dog Vendor. But at the end of a day, it’s still an ostrich, not exactly the first wingless, flightless bird you think of when you think of sports. (That, sports fans, would be the penguin. The penguin.)

“When we decided to look at our franchise, we felt that we needed a mark the spoke to families since being a family destination has been paramount to our success,” said Fightin Phils General Manager Scott Hunsicker. “Our former mark didn’t speak to those families and kids—something our new mark definitely does. Why an ostrich? Because if we were going to select an animal or creature, we wanted to pick something that spoke to the fun nature of a Fightin Phils baseball game.”

In addition to the ostrich logo, Reading has rolled out unique symbols of an “F-fist” logo, a historic feathered “R” logo, and several feathered “Fightins” and “Fightin Phils” wording reminiscent of the fun, flightless bird. 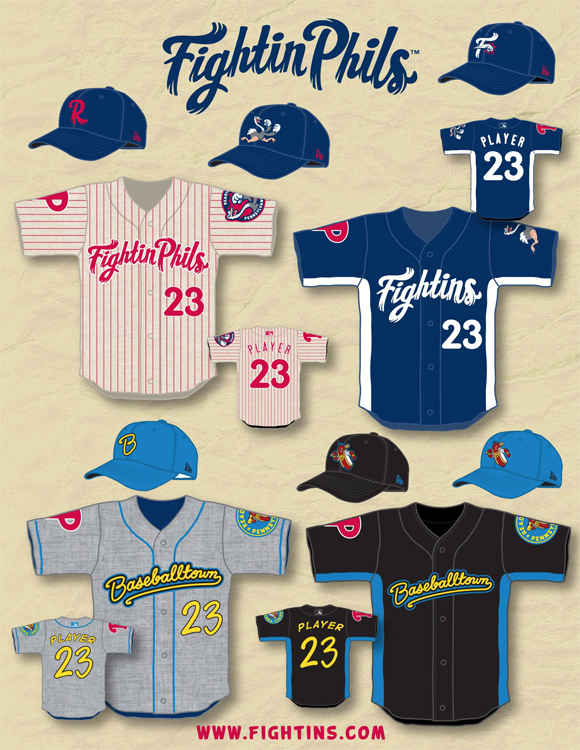 On top of its new name and logo, the team will have the most on-field wear in the minor leagues when they take the field in April. The team will also don an alternate navy jersey at home games with white inserts up the front of the jersey. White script displaying Fightins will read across the chest of this jersey. Fightins players will wear a separate navy cap with the “F-Fist” logo when they wear the alternate jersey.

“Even though most of our fans are Phillies fans, not all of them are,” said Hunsicker. “The Fightins is an identity that allows those in Berks County and beyond to celebrate both the Phillies and the Reading franchise independently of the Phillies if they choose to do so.”

The three navy home caps with three uniquely different logos on the front each are specifically designed to reach out to three different fan groups. With its cartoonish appearances, the ostrich cap is targeted toward the youthful at heart. The mighty “F-Fist” hat is aimed at young adult to middle-aged fan. Hearkening back to Reading’s past teams like the Indians and Red Sox, the feathered historic “R” hat is tailored for the baseball fans that have supported Baseballtown for years.

The Fightins will honor the legacy of Baseballtown by wearing a gray faux-flannel uniform on the road, a first for a professional baseball team. The gray jersey will display the Baseballtown script across the chest with a patch of Bunbino on the sleeve. Fightins players will wear a iris blue cap featuring the Bunbino logo.

On the road and at select home games, players will have the option to wear black Baseballtown jerseys with blue inserts up the front. The black uniforms mirror the same jerseys worn by Eastern League All-Stars during the 2012’s Baseballtown All-Star Classic. When at home, the team will wear an iris blue hat with a yellow “B”; while on the road, the team will wear the Bunbino iris blue cap.

“Our analysis showed us that Baseballtown resonated across all metrics,” said Hunsicker. “Our fans love Baseballtown and what it represents from a historic standpoint. Fans in visiting cities are fascinated by the Baseballtown identity and how it spoke to the baseball history of the entire region.” The Fightins look was brought to life at Brandiose in San Diego, where Jason Klein and Casey White make teams famous by celebrating their brand stories. Partners Klein and White invented the first glow-in-the-dark on-field cap for the Casper Ghosts and first on-field rally cap for the Altoona Curve. They also have dreamt up some of the most popular logos in baseball including the Richmond Flying Squirrels, Lehigh Valley Iron Pigs, and the Cincinnati Reds, America’s oldest baseball club.

“Jason and Casey are the best in the world at what they do,” said Hunsicker. “Their practice of integrating themselves into the team and town they are designing for has paid dividends for us. Working with two guys of their caliber made our entire rebranding a smooth and exciting process.”

The development process for the rebranding began 18 months ago when Klein and White met with front office staff, community members, and Philadelphia Phillies representatives to discuss how the franchise could further its brand while digging deeper into its heritage. Brandiose developed the logos, uniforms, and other enhancements for the 2013 season.

Bisons to unveil new logo for 2013 and beyond
Ports release alt uniforms, logos