The team’s cap logo (shown below) shows a Blue Wahoo circling a baseball bat forming the shape of a ‘P’ for Pensacola. 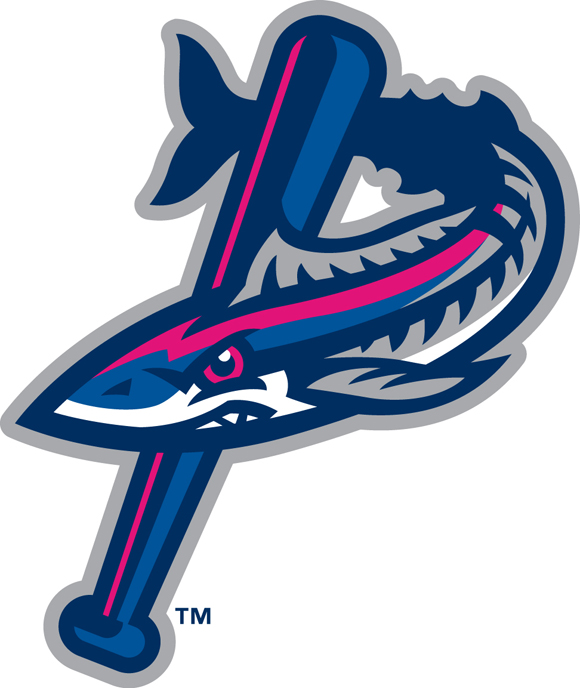 The team’s alternate cap features a fishing hook also in the shape of a “P” (as shown below). Neon Red, Gulf Coast Royal, Blue Angel Navy, and Tin Roof Tin make up the club’s official colors, celebrating the textures and colors of the Emerald Coast. The Blue Wahoos are the first sports team to adopt Neon Red, a tribute to the neon signs that illuminate Pensacola’s beachfront establishments.  The process of developing the team logo began in January when the design team met in Pensacola with fans, staff and community members to learn about the stories, history, and personality of the Pensacola area.

Blue Wahoos President Bruce Baldwin said that the logo was unique from other sports logos, featuring colors and imagery not commonly used in other sports identities.  “This is not going to be your typical baseball team, and we’re not going to give our fans a typical experience. It’s going to be extraordinary — from a beautiful stadium on the water, to a fantastic downtown for fans to enjoy before and after the games, and great community events, but it starts with the look and feel of the team.  I think the logo really captures the spirit of Pensacola, and I’m excited about the fans getting to see another aspect of what is going to be a fantastic experience.”

Team owners Quint and Rishy Studer expressed their appreciation for the community in supporting the team and the waterfront stadium. “This has been a long labor of love for Rishy and me,” said Studer.  “It hasn’t always been easy, but we have always believed, and had friends to support us in that belief, that if this community came together, great things could happen.  Tonight we unveiled a fantastic logo for the Blue Wahoos, but I think this also helped to create, in some small way, a picture of what Pensacola’s future can be.  We’ve got some great things happening in this community, and Rishy and I are just happy to be a part of this great event, and we’re very appreciative of everyone who has helped make this a reality — from the Mayor and City Council to the CMPA to the fans and construction team — we’re going to be playing baseball in Pensacola on Opening Day. It’s going to be awesome.”

The team is a result of a two-franchise shift for 2012. The Blue Wahoo are the former Carolina Mudcats (Class AA; Southern League). The Class A Kinston Indians will be moving to Zebulon for play in 2012.

New Blue Jays look: Back to the future
Twins to pitch for 2014 All-Star Game