You are here: Home › Astros formally roll out Sugar Land Space Cowboys
By Kevin Reichard on January 30, 2022 in Minor-League Baseball 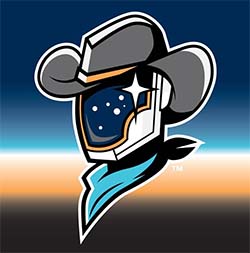 Not the newest of news: word leaked out a few weeks ago. What was unveiled last night: the new logos, jerseys and wordmarks. Basically, the new branding combines the NASA space theme with the cowboy narrative that has been popular in literature, TV and films for over 100 years. Space westerns, of course, are a staple of popular culture; more than a half-century ago Gene Roddenberry pitched Star Trek as “Wagon Train to the stars.”

“We are excited to be launching the new identity for our Triple A affiliate, the Sugar Land Space Cowboys,” Anita Sehgal, Astros Senior Vice President, Marketing and Communications said via press release. “Today represents a new chapter of professional baseball in Sugar Land and the next step to take as the team moved from its independent ball roots to affiliated Triple A baseball. Our goal was to clearly reflect a strong connection to the Astros family, but also stand out as a unique identity aligned with the vibrant, progressive, and family focused values of the City of Sugar Land community.”

Here are the stories behind the new branding: