You are here: Home › Countdown to U.S. Bank Stadium opening
By Kevin Reichard on July 21, 2015 in College Baseball, News 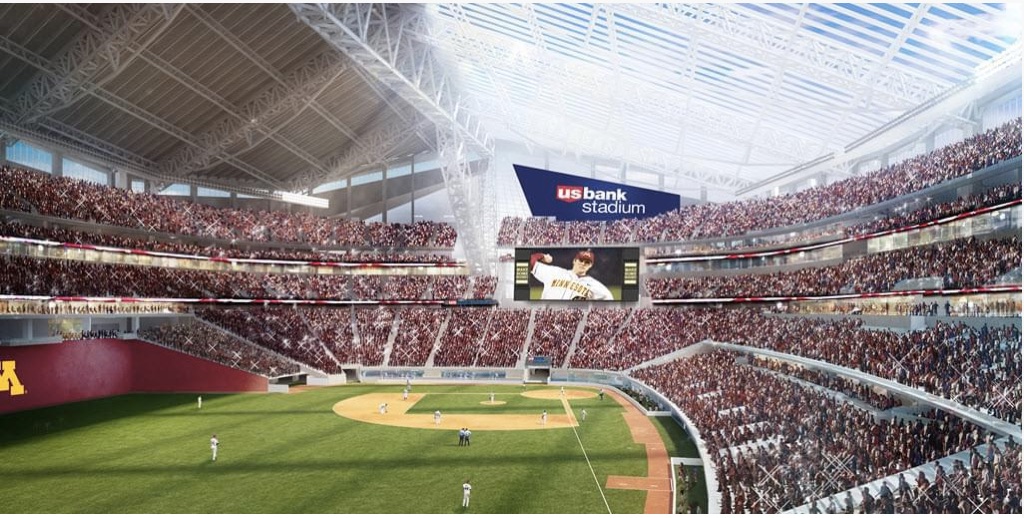 U.S. Bank Stadium will certainly be an opulent home for college baseball, as the future early-season home of the University of Minnesota Golden Gophers — and also, incidentally, of the NFL’s Minnesota Vikings — enters the final year of construction.

Monday marked a milestone in construction of the new downtown facility: the stadium is set for occupancy in a year, able to host Vikings football in July 2016 and baseball in winter 2016/spring 2017. The new stadium replaces the Metrodome in every day, and that includes on the baseball front. The Metrodome was used for a slew of high-school, small-college and Golden Gopher baseball in January, February, March and early April, and that will be true of U.S. Bank Stadium. It will be interesting to see how the facility will play for baseball: the Metrodome was full of compromises for the Golden Gophers and the Twins (remember the right-field baggie? remember the terrible artificial turf?), and from the renderings it looks like right field be an adventure for the Gophers as well.

We covered the milestone in more depth in our Football Stadium Digest site. You can’t read it yet, however; we’re putting the final touches on the site, and it should be live August 1. But here’s our pitch to sign up for the site’s e-mailing list (go to footballstadiumdigest.com and enter your email address), the site’s Facebook page or the site’s (as yet relatively unpopulated) Twitter account.