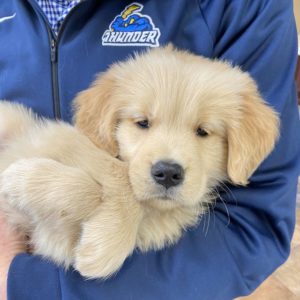 The Trenton Thunder (Class AA; Eastern League) will have a new bat dog join the team during the 2020 season, and have launched a fan vote for a special naming contest.

Following the pawsteps of Rookie, Derby and Chase the Thunder are asking fans to vote in a special naming contest by clicking here.

The five names that fans will have the opportunity to vote on are:

“I’m so excited to welcome the next generation of the Thunder Bat Dog tradition this season,” said Thunder GM/COO Jeff Hurley. “I look forward to introducing our fans to the puppy and continuing this great tradition at ARM & HAMMER Park.”

The Thunder have also announced a special four-game Puppy Pack, presented by Dogs & Cats Rule, in which fans can bring their well-behaved dogs to games at ARM & HAMMER Park during the 2020 season. The special pack is on sale now.

The new bat dog will make many appearances at Thunder games during the 2020 season. He will be trained by Shelly’s School for Dogs at the Green Leaf Pet Resort in Millstone, NJ and is slated to make his bat dog debut during the 2021 season. The new bat dog, like Chase, Derby and Rookie, is presented by ARM & HAMMER.

The Thunder gained worldwide attention beginning in 2002 when then two-year-old “Chase That Golden Thunder” joined the team as an official bat dog, entertainer and mascot. In 2008, Chase’s son “Home Run Derby” entered the world and followed in his father’s pawsteps in Trenton while his brother “Ollie” continued the family business with the New Hampshire Fisher Cats (Class AA; Eastern League). Chase and Derby worked alongside each other at ARM & HAMMER Park beginning in 2010 until Chase’s passing in July 2013. Rookie became the third generation of the Thunder bat dog tradition when he was born in December of 2013 and made his bat dog debut in April of 2015. He retreived bats alongside Derby during the 2016 and ’17 seasons until Derby’s passing in January of 2018.

The new bat dog was born on December 22, 2019 as part of a litter of nine puppies including five boys and four girls.