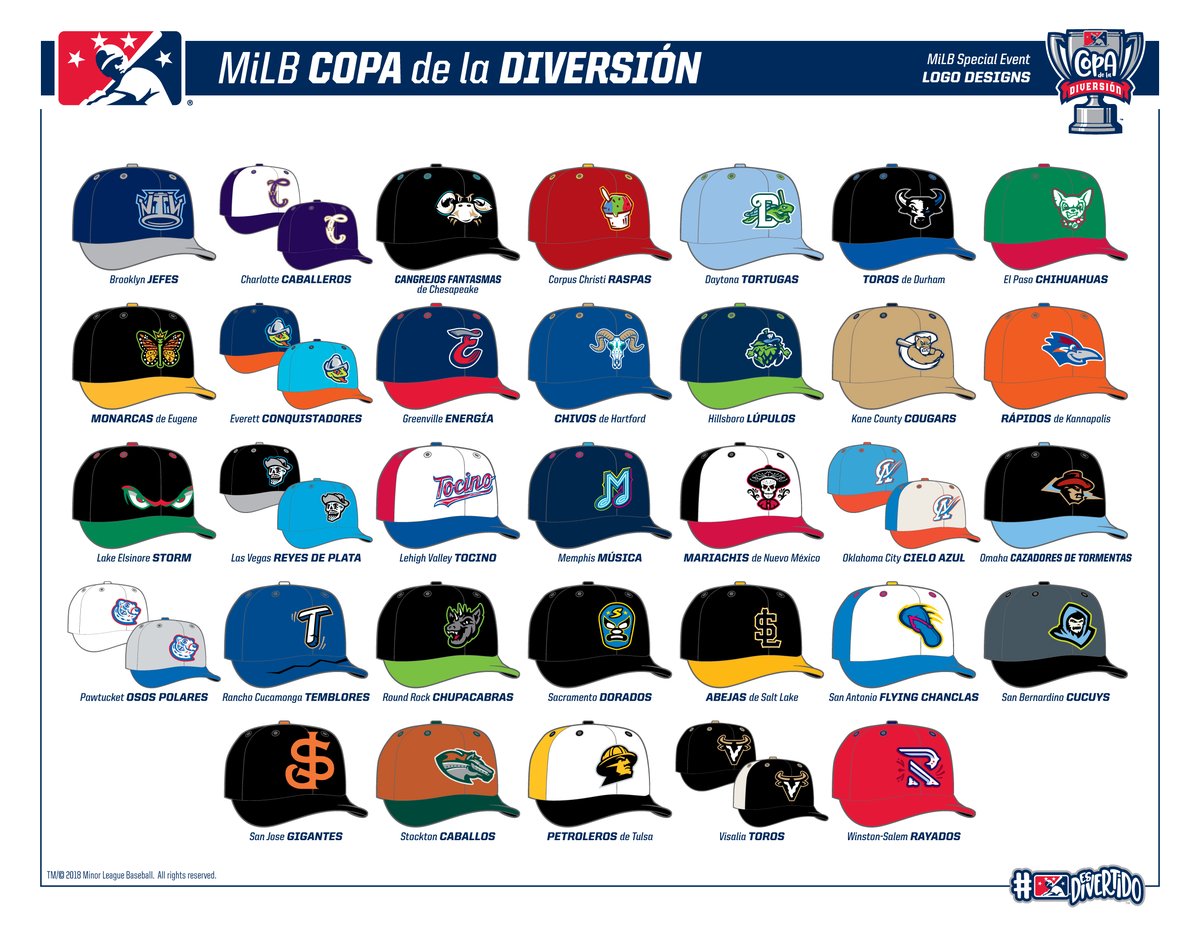 Ballpark Digest annually honors the team executing the best rebranding, from design to reception. This year is different: There is one winner, with 33 different teams represented. Minor League Baseball’s Copa de La Diversión was an ambitious nationwide campaign and overwhelming success, earning our Best New Logo(s)/Branding of the Year citation.

“We could not be more excited,” said Kurt Hunzeker, Vice President, Marketing Strategy & Research for Minor League Baseball. “The reason why it was such a success on so many levels was how the clubs embraced this content, this platform. They took it to their local community and absolutely did a phenomenal job. It was authentic. It was not a ‘Los’ team name in English, it was not a one-night, one-hit wonder…. We did three years of research on this. We wanted to make sure that this wasn’t perceived as anything less than authentic, that our clubs truly wanted to represent their entire community.” The campaign was officially rolled out on March 20. “We took the 33 teams and split them up in groups of five or six,” said Hunzeker. “So every hour on the hour, we unveiled five or six. We started at 10 o’clock. At noon, both Sports Illustrated and Bleacher Report started ranking them…. At 3 p.m., through our store at MiLB.com, we had already sold out of certain teams’ hats. We bought more than we typically would, and we were out. We had four people buy all 33 at retail price.” S.I.’s Top 5: The San Antonio Flying Chanclas, Round Rock Chupacabras, Mariachis de Nuevo México, Las Vegas Reyes de Plata, and the Greenville Energia.

The logos themselves, ranging from the flying chancla (sandal) itself to the cucuy (bogeyman) to a sombrero skull-faced mariachi were a sensation; each of these was designed in house by Minor League Baseball Senior Manager, Brand Development Ryan Foose and the development team, who accounted for 23 of the 33 logos/brands. (A few teams, like Lake Elsinore and El Paso, simply substituted new, bolder colors.) They concentrated particularly on their color palette – “bright colors are very much the fabric of the Hispanic marketplace,” said Hunzeker – in addition to working individually with the ballclubs (who in turn worked with their local Hispanic leaders and chambers of commerce) to find the best identity to introduce to their community.

Copa featured 160 scheduled games in all, though four were rained out. They drew an average of 4,857 fans per game, nearly 1,000 more than the regular MiLB average per game.

Additionally, though MiLB optimistically projected $500,000 in retail sales combined, Hunzeker reports that they have exceeded expectations by 575 percent: $3.6 million and counting.

Hunzeker’s first eyewitness experience into Copa’s impact came on Cinco de Mayo in San Antonio. “I show up two hours before game time and there’s 1,500 people waiting to come in for the first Flying Chanclas game…. They drew over 8,000. [Meanwhile,] I’m getting texts from John Traub, the GM in Albuquerque, saying, ‘Hey, by the way, in case you want to know, I’m proofing a press release that may or may not have something to do with setting the single-game attendance record in our ballpark history.’ And I’m sitting there in San Antonio reading this and watching ladies walk by, and they have self-made hats that have teal and yellow and pink sandals attached to it.” It was the largest crowd in San Antonio since 2004.

Albuquerque’s first sentence of the aforementioned press release: “The Albuquerque Isotopes set a single-game attendance record on Saturday night at Isotopes Park as 16,975 fans attended the first Mariachis de Nuevo México game.” In the following paragraph, Traub is quoted as saying, in part, “We have been absolutely blown away by the support for the Mariachis.”

“This is what I dreamed of happening, but never thought this would be the case,” said Hunzeker. “It was planned to some extent, but no one foresaw I think some of the impact and just the volume of people.”

Copa can trace its roots back to January 2015, Hunzeker’s second day on the job, when Minor League Baseball began a three-year research project aimed at learning how to bring Latinx fans to the ballparks.  “It really came down to, ‘You represent the community but there are some things that don’t really speak to me, sometimes I don’t feel invited.’” This prompted the 2017 introduction of the Es Divertido Ser Un Fan campaign at a national level, directly translating the English-language campaign of It’s Fun to Be a Fan. Still, Minor League Baseball was exercising caution toward its greater goals.

“2018 was going to be the trial,” said Hunzeker, “the test program. Well, more and more numbers started coming in and the clubs, we’re talking to them, they’re getting really excited.  And then a couple of them were like, hey, can we do this this year? And we’re like, yeah, I guess we could. So in August of 2017, we launched that program for the four teams.” The Kane County Cougars, the Las Vegas Reyes de Plata, Visalia Toros, and Charlotte Caballeros were the guinea pigs, each one representing a different market type that could then be extrapolated to aid future MiLB teams. Kane County, which kept its nickname in order to introduce itself to new fans coming to the park, “did Spanish language billboards, they bought Pandora and Spotify, they aligned with their local Univision and Telemundo stations, they find new partners, and they were doing street teams leading up to the games. That is Chapter 1 of the Best Practices book of what is now Copa for sure.”

Copa de La Diversión will expand to 72 Minor League Baseball teams in 2019, adding 39 more to the roster. Before then, however, there’s one more massive event to come: The awarding of the official three-foot tall Copa to the team that best connected with its community, as determined by an official non-MiLB advisory board (“key influencers and executives that are at the forefront of the Hispanic consumer base,” according to Hunzeker). The Copa winner will be announced on Monday night, Dec. 10, at the Baseball Winter Meetings in Las Vegas.

“It’s not going to be like the Stanley Cup where it rotates around,” said Hunzeker. “Once we give the trophy, it’s yours forever.”

The Macon Bacon (summer collegiate; Coastal Plain League) began play in 2018 with a fun, creative brand that resonated with fans and generated national attention. “We’re honored that we have been named an honorable mention,” said Bacon Director of Marketing and Public Relations Tyler Vertin. “The Macon Bacon brand was experienced worldwide with merchandise sales across all 50 states and several countries, along with being debuted on ESPN ‘s SportsCenter the evening we launched the name and logo.”

The former Tampa Yankees rebranded to the Tampa Tarpons (High A; Florida State League) prior to the 2018 season. The logo was a success in creating a modern look for a classic name, while giving the club a separate identity from its parent club.