You are here: Home › Warner Park (the “Duck Pond”) / Madison Mallards
By Kevin Reichard on April 6, 2009 in College Baseball, Visits

It is one of the best ballpark renovations we’ve seen in years: the Madison Mallards (summer collegiate; Northwoods League) made huge changes to Warner Park (i.e., the Duck Pond) this offseason, tearing down obsolete bleachers and adding all chairback seating, a new club and an elevated concourse — all for under $2 million. Year Opened: 1982; renovated, 2011
Capacity: 6,750
Dimensions: 308 1/3L, 365LC, 380C, 365RC, 295 2/3R
Playing Surface: Grass
Website: mallardsbaseball.com
Phone: 608/246-4277
Ticket Prices (2012): Triple Play Club, $25; Dugout Box, $12; Field Box, $10; Diamond Box, $9; Standing Room Only, $5. Reserved Duck Blind (all you can eat/drink): $38 (Fri-Sat), $33 (Sun-Thurs). GA Duck Blind (all you can eat/drink): $33 (Fri-Sat), $28 (Sun-Thurs). Duck Blind Club Reserved Tables for 8: $350. Tricor/West Bend Club sold as part of season ticket.
League: Northwoods League.
Former Tenants: Madison Muskies (Low Class A; Midwest League), Madison Hatters (Low Class A; Midwest League), Madison Black Wolf (independent; Northern League).
Parking: Free and abundant, either adjacent to the ballpark or across the street at the mall.
Address/Directions: 2920 N. Sherman Av., Madison. Warner Park in on the northwestern side of Madison. From wherever you are, you’ll want to make your way to the Aberg Ave. exit and head northwest. After you pass the Shopko (on right), you’ll turn right onto Packers Avenue, eventually veering left off of Packers Avenue onto Northport Drive. Warner Park is on the southwest corner (on your left) of Northport Drive and Sherman Avenue. There are two entrances to Warner: either turn left to reach the Sherman Avenue entrance (on the right-hand side of Sherman) or continue past the intersection and turn left into the Northport Drive entrance. The changes at the Duck Pond are pretty dramatic. The bleachers in the seating bowl was totally dismantled after the 2010 season, while the seating area of the grandstand was dismantled as well. Installed down the first-base line: a new two-section metal structure, intersected by a concourse. That concourse extends to a reconstructed grandstand behind home plate; the concessions and restroom building was left intact, while the press box was raised to make room for a new all-you-can-eat club section catering to fans in the two sections behind home plate. The concourse then extends further down the third-base line. A walkway allows handicapped access to the upper concourse; there are also traditional stairwells.

New for 2012: the team addressed some shortcomings in the outfield area. In left field, a new berm was installed, perfect for families and groups wanting to spread out. (The only problem: No beer, so you need to head back to the main gate, buy your brew and have a staffer accompany you back to the berm.) In the right-field power alley, the team installed a double-decker seating area and extended the popular all-you-care-to-consume Duck Blind, albeit more upscale: the space is now set up with tables seating eight, sold for $350 per game. For that money, you have the food/beer as well as a dedicated stand and some privacy.

The new structure also has a unique twist: it’s built above a bullpen. Because of space issues, the bullpen was partially extended outside the ballpark to a fenced area. That means a pitcher is throwing into the structure.

Also new for this season: two group areas seating 12 each in the main concourse, at the back of the seating bowl.

All of this means those terribly uncomfortable bleachers are gone — at least, they’re gone from the seating bowl, all replaced by chairback seats coming from Oriole Park at Camden Yards, complete with drink holders. In an ingenious move, the Mallards used them as a building material elsewhere in the park. Sitting in the club? There are three rows of swivel seats where the bleachers are used for food/drink and foot rails. The bleachers also clad a new, expanded team store at the site of the old merchandise stand.

The old roof is gone, reused as part of a new angular roof designed to better shade fans. Here’s the old grandstand: Here’s the new grandstand from the same angle: The new bleachers don’t sit in the same exact spot as the old bleachers. There formerly was a walkway between the bottom of the bleachers and the backstop, but that’s gone: the new bleachers go right up to the backstop. That puts some seats very, very close to the action, particularly those on the first-base side; if you’re sitting past the netting, you’ll need to be vigilant about missed throws to first base. The new third-base seating is also angled differently; the ballpark has always been awkwardly configured when it comes to a setting sun during an evening game, and the ballpark changes address this somewhat.

As mentioned, there’s a new Tricor-West Bend Club sitting in back of home plate. The club, sitting where the press box sat (instead of being dismantled, the press box was raised), features three rows of casual seating and a section of picnic tables. It’s not a remote location at all, and it’s proven to be a popular place for watching the game, especially in early innings when the two sections directly behind home plate are in the sun.

The new, wide concourse ties together the seating bowl with standing-room space on the third-base side, concessions behind home plate and a prominent spot for the team’s entertainment, including a keyboard player and PA guy Aaron Sims. The new concession building is a big step up from the old merchandise stand; there’s plenty of room to display T-shirts and jerseys both on the high walls and on floor displays. It’s a sunny, bright space.

Though the ballpark seating bowl is dramatically upgraded, the rest of the ballpark is pretty much intact, reflecting the other upgrades funded by the Mallards over the years. Start with the Duck Blind, the huge deck that wraps around the right-field corner. It’s an all-you-can-consume area, filled with picnic tables and bar rails. It’s usually crammed for most games; the allure of decent grub and an assortment of beers from the Great Dane, a leading Midwest microbrewery, is too much for most fans. New last season: the TDS Triple Play area, which features used seats from Wrigley Field, installed down the third-base line. A ticket in this section not only gives you a little history, but all the food you can eat and three beers. Multiple rows are arranged grandstand-style, while a back row has seats mounted bar-style in back of a rail. It’s a nice reuse of old seats and adds some upsell to what was formerly dead space in the ballpark. (The photo above is from the 2010 season.) 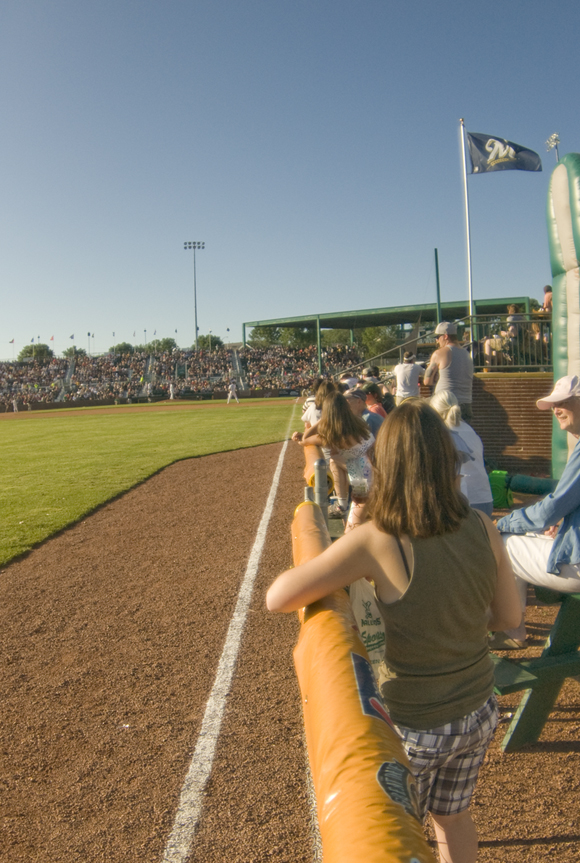 Shoehorning such extensive improvements into a pretty confined space isn’t the easiest of tasks: Every square foot within the ballpark is in use. But that’s OK: A Mallards game is now officially an event, and the team finally has a ballpark to match its imaginative game-day programs and high-level concession offerings. The Mallards have toned down things this season, but the best parts of the game — Maynard Mallard rappelling onto the playing field, a Great Dane Crop Circle Wheat on tap and hanging out with friends in the Duck Blind — are intact.

(Full disclosure: The son of site founder Kevin Reichard works as game-day staff for the Mallards.)

There are two ways to go when considering what to eat and drink at a Mallards game. There are all-you-can-consume deals in the Duck Blind, the Triple Play seats or a season ticket (full or partial) featuring food and drink (which may or may not include Club access). The food tends to be pretty good; the brats are locally sourced from Stoddard’s and are top-notch, while the beer is from the Great Dane, an outstanding microbrewery chain in Madison, and Potosi Brewing, an underrated Wisconsin craft brewer. (Try the Cave Ale.) If you decide not to spring for the Duck Blind, the food offerings at Warner Park are range from the standard — hot dogs, burgers, brats, pizza, real cotton candy, and pop — to extravagant items like a two-foot-long, $12 brat complete with toppings like cheese curds. It’s probably the best thing we’ve ever eaten at a ballpark. The Maynard’s stand features delicacies like cheese curds and burgers, as well as a savory parfait with layers of mashed potatoes, meat and gravy.
There’s a wide assortment of beer on tap as well: Bud, Bud Light, many Great Dane beers (including Crop Circle Wheat) and Capital Amber. The concessions are centralized in back of the grandstand, and there can be some serious lines for food at the start of a game.

Warner Park served as the home of the Madison Muskies (Low Class A; Midwest League), the ill-fated Madison Hatters (Low Class A; Midwest League) and the Madison Black Wolf (independent; Northern League). The Muskies franchise was a comet in professional baseball, as original team owner Ed Janus (who also launched the Capital Brewery; he was indeed a man for all seasons) launched the team on a wing and a prayer, garnering some national headlines along the way. Go Fish!

No kid should be bored at a Mallards game. There are mascots roaming the park, and there’s a host of kid-oriented activities down the third-base line.

In fact, kids should be captivated the minute they walk in the ballpark. A large inflatable Maynard Mallard can be seen from the front gate, and the entry path to the ballpark is festooned with duck tracks. A children’s playground keeps the younger set occupied, while picnic seating close to the foul lines helps parents hang out with the kids while still watching the game. Madison is the sort of town where there’s something going on every day of the year: between the university and the local population, the town rocks. We’d recommend checking out the Website for Isthmus, the local alternative weekly, for their exhaustive listing of events.

Downtown Madison rocks on most nights, not just weekends. The action clusters in two areas: around the State Capitol and along State Street, which links the Capitol and the University. We’re partial toward the Capitol Square area, if only because the establishments there are geared more toward adults. Our favorites: The Old Fashioned, which replicates a small-town tavern with a big beer selection and an eclectic menu (go for the ring bologna); the original Great Dane Brewery location; Brocach, an improbably authentic Irish pub; and the Coopers Tavern, another casual gastropub. Also on the Square: L’Etoile (certainly the best restaurant in town; you won’t go there in your ballpark duds) and its more casual cousin, Graze.

There are no hotels within walking distance of Warner Park. Luckily, Madison is a pretty compact city, so you’re never more than 15 minutes away from the center of town. There are basically three areas to consider when looking at hotel reservations: