Jarry Park was a small, single-deck ballpark originally constructed as a temporary stadium — one that ended up being used seven seasons as the first home of the Montreal Expos. As such, it was the site of the first MLB regular-season game played outside of the United States on April 14, 1969, in a game that the Expos won 8-7 over the St. Louis Cardinals. 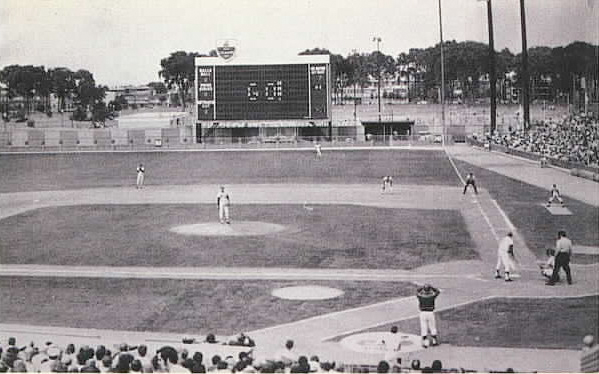 It was a great beginning to MLB baseball in Montreal: over 29,000 eager fans crammed a stadium that held only 28,000, oblivious to the fact that the ballpark wasn’t completed — folding chairs were used instead of bleacher seats, which were still on the way. Fans stood on big piles of snow outside the second eight-foot right-field outfield fence and watched the game for free.

That there was a ballpark at all was a testament to the diligence of Charles Bronfman (part of the family that owned distilling giant Seagram’s), who had to convince Montreal Mayor Jean Drapeau to approve its use as a temporary baseball facility. Before the arrival of the Expos, Jarry Park was a smaller, 3,000-seat stadium used for amateur baseball. But when city leaders went looking around for a baseball-stadium site, Jarry Park was the only logical location. The plan was to play in Jarry Park for a year, until a new domed stadium could be built for the team. But no dome was forthcoming, and the stadium ended up being the home of the Expos until a new stadium was constructed in conjunction with the 1976 Olympics — Olympic Stadium.

Being a “temporary” facility, Jarry Park had few amenities. The only covered seating was in the press box, and the climes of Montreal frequently meant that games were played in cold and damp conditions. There was a single set of bleachers in left field. It didn’t matter to Montreal fans: despite having the smallest stadium in the majors, the Expos drew 1.2 million fans their inaugural season.

Jarry Park also has the distinction of serving as the home of both a MLB team and a Class AAA team in a single season. In late May of 1970, the Buffalo Bisons (Class AAA; International League) franchise was taken over by the league after ownership difficulties, and the team played in a variety of ballparks as the Winnipeg Whips, including 18 home games on 13 dates in Jarry Park, as well as Norfolk and Richmond. The Whips played all of its home games in Winnipeg in 1971.

Today there’s still a Jarry Park, but it bears little resemblance to the original Expos ballpark. The site is now under the guidance of Tennis Canada and is used for professional and amateur tennis events, as well as concerts, exhibitions, and other sporting events.

The week that was: April 4
Minute Maid Park / Houston Astros