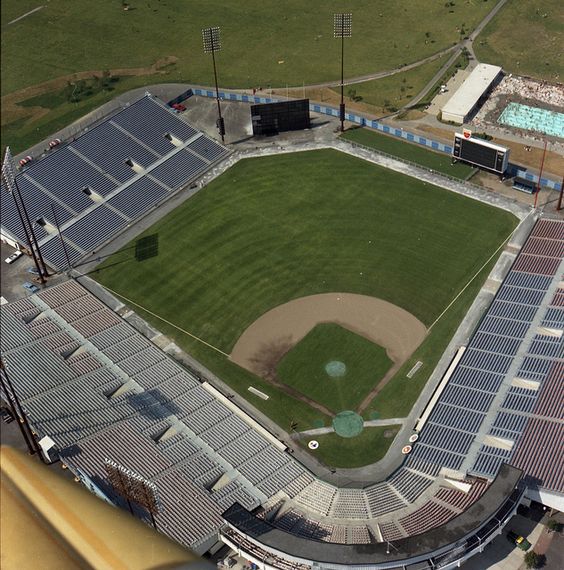 The year 1969 was a big one in Major League Baseball, as four expansion teams were added to the mix. This month we’re looking back at the four expansion ballparks. Last week it was Sicks’ Stadium, home of the Seattle Pilots for a single season. This week we wrap up the series with a look at Jarry Park Stadium, first home of the Montreal Expos.

In the process, Jarry Park made history, becoming the first Major League Baseball ballpark to be located outside the United States upon opening on April 14, 1969. The Montreal Expos generated a passionate fan base, though not necessarily a large one—the Expos drew 14,970 fans a game in that inaugural 1969 season, good for seventh in the new 12-team National League. But attendance peaked in 1970 and steadily declined before Olympic Stadium opened.

Major League Baseball expansion work officially began in 1967, when Charley Finley proposed moving his Athletics from Kansas City to Oakland. Finley’s tenure as the A’s owner was a rocky one; after an early honeymoon period, local fans tired of his unstable management of the team, both on the field and in the front office. Kansas City officials had been working on a plan for a new ballpark to replace Municipal Stadium, but Finley didn’t believe they would follow through if he still owned the team. His move triggered a series of moves that included an influential U.S. senator, Stuart Symington (D-MO), claiming he’d work to revoke MLB’s antitrust exemption if Kansas City had to wait until 1971 for expansion, MLB’s preferred timeline. So MLB forged ahead with expansion.

Jarry Park had been originally been built in 1960 as a lure to keep Minor League Baseball in Montreal after the Los Angeles Dodgers pulled their Montreal Royals franchise affiliation. MiLB left anyway, leaving the city with a 3,000-capacity facility used mostly for amateur baseball. Jarry Park was not the first choice for a temporary MLB ballpark. Montreal city officials envisioned the Autostade, a centerpiece of Expo 67, as home for an expansion team. Comprising 19 precast sections constructed from pre-stressed concrete beams and columns, the Autostade seated 25,000 and was designed as a modular sporting facility, the ultimate modern stadium. The 19 sections could be moved and rearranged to serve any purpose (albeit with some planning) and was configured as an oval for Expo 67.

When Mayor Jean Drapeau sent Gerry Snyder to the 1967 Winter Meetings in Mexico City to pitch the National League expansion committee on the charms of Montreal, the Autostade was pitched as a temporary home for Major League Baseball. Despite being designed as being modular, Drapeau didn’t argue for reconfiguring the oval for baseball: the city prepared a baseball mockup showing foul poles 250 feet down each line. But after it was determined it would be cheaper to expand Jarry Park Stadium than to reconfigure the Autostade and give up on big-event revenue, Jarry Park became the new home of the expansion Expos.

When the Expos began play, Jarry Park Stadium—or Stade Parc Jarry in French—was expanded to 28,000 capacity, all on single decks in the grandstand and left field. In right field was a municipal swimming pool beyond a large scoreboard. To reach the pool with a “splash hit” required some power or luck. Over the years Willie Stargell launched enough homers in the pool (mostly rolling in, save one huge blast in the middle of the pool) to earn a loyal local following, the award of a lifesaver upon retirement and the informal naming of the pool as La piscine de Willie. He was not the only major leaguer to homer into the pool: Ron Fairly bounced a homer off the scoreboard into the pool as well. (Despite rumors to the contrary, there’s no indication Rusty Staub ever achieved the feat.)

Stargell wasn’t the only player to earn loyalty from Expos fans. For many, highlights of many game nights came from P.A. announcer Claude Mouton, whose drawn-out introduction of catcher John Boccabella coming to bat is still remembered by many fans. A career .219 hitter, he was a typical expansion product, batting an anemic .105 in that inaugural 1969 season. But he’s remembered as one of the most notable Expos to play at Jarry Park. Today the site of Jarry Park Stadium is IGA Stadium, home to Tennis Canada. When the Expos moved, tennis courts were installed on the old playing field. Part of the Jarry Park grandstand was used when the ballpark was converted to a tennis facility in 1996 and upgraded since. IGA Stadium now features several practice courts beyond the main venue, as well as an adjacent indoor tennis center. You can see the curve of the grandstand in the corner, but otherwise all traces of the old ballpark are gone.

Except for one feature: La piscine de Willie lives on beyond what would have been the right-field chain-link fence.