You are here: Home › Promotions Watch: Star Wars Nights
By Zach Spedden on May 4, 2016 in Minor-League Baseball, News 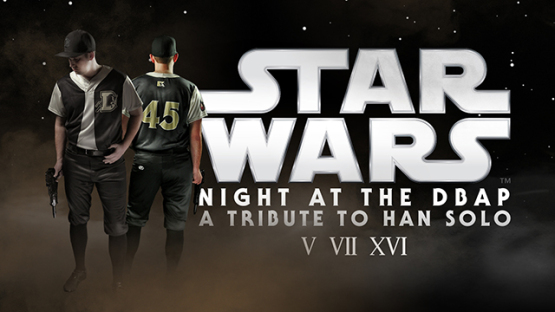 Today is May the fourth, which serves as a perfect reminder of the continually bustling trend that is Star Wars night in Minor League Baseball. Promotions Watch looks at some of the notable entries in this year’s upcoming Star Wars slate, including longstanding traditions as well as some new events.

Those who have followed the progress of Star Wars nights in MiLB have probably come to expect that certain teams will pay elaborate tributes every season. The Omaha Storm Chasers (Class AAA; Pacific Coast League) have been a consistent presence on the Star Wars docket, and they will host their annual turn at the promotion on May 6.

As Star Wars night returns to Fifth Third Field on May 7, the Toledo Mud Hens (Class AAA; International League) will have a few unique offerings. Starting at 5:30 p.m., select ticket holders can take part in a Star Wars-themed buffet that features a wide variety of fare, including BB-8 meatballs and Wookie cookies. There will also be an Intergalactic dodgeball game at Hensville Park in which participants can dress as their favorite characters. Even the post-game fireworks follow a Star Wars theme, as they will be set to music from the film series.

The Durham Bulls (Class AAA; International League) are known for their elaborate theme nights, and their Star Wars tribute follows that trend. On May 7, the Bulls will sport a Hans Solo-themed jersey that contains several layers of symbolism—including nods to Princess Leia and Chewbacca, a tribute sleeve patch, and numbers that are designed in the font used in the title credits for Star Wars: The Force Awakens.

Also back for another turn at the promotion is the Altoona Curve (Class AA; Eastern League), who on May 21 will provide a worthy follow up to last year’s drooling Jabba the Hut jersey. Jar Jar Binks will be featured prominently on this year’s uniform, with his image dominating the front of a black jersey with yellow trim.

June will be a fairly robust month when it comes to Star Wars nights. Among the tributes to watch is one from the Fort Wayne TinCaps (Low A; Midwest League), who will honor Star Wars on June 17. What is notable about this promotion is its staying power. The TinCaps typically introduce a new slate of theme nights before each season, and Star Wars is the only one to have been held each season since Parkview Field opened in 2009.

On June 16, the Northwest Arkansas Naturals (Class AA; Texas League) will host a Star Wars promotion that features a few unique elements. Along with a specialty jersey that will be auctioned off for charity, the Naturals will carry the theme over to their postgame fireworks show, which will be set to Star Wars music.

The Potomac Nationals (High A; Carolina League) are set to host Star Wars day on June 19, an afternoon that will be full of special offerings at Pftizner Stadium. Along with an auction of Admiral Ackbar jerseys, the Nationals will host a few Father’s Day specials, including a post-game picnic.

In two cases, clubs have been building the hype for their respective Star Wars tributes for several months. The Rochester Red Wings (Class AAA; International League) will feature Star Wars night on June 25, with the Red Wings set to take the field in jerseys modeled after rebel fighter pilot suit. However, some fans were able to get in on the promotion early, as the Red Wings made pre-purchased tickets available through a package that offered a set of mini Star Wars bobbleheads. Also included in the promotion is a film-themed fireworks show. The Kannapolis Intimidators (Low A; Sally League) spent much of this spring building the hype for their Star Wars night. Fans have had the opportunity to vote on social media for one of four Star Wars-inspired jerseys, thereby selecting the uniform that the team will wear on June 25. The winning, Darth-Vader style jersey (see above) was revealed today.

MCU Park will once again be the home of a Star Wars tribute this summer, with the Brooklyn Cyclones (Short Season A; NY-Penn League) placing it on the schedule for July 23. The Cyclones have rolled out some interesting concepts in past years—from Star Wars-related giveaways to Sith Empire-themed jerseys—and early indications point to another solid promotion. The first 2,000 fans in attendance will receive a glowing “BC” cap, and there will be a post-game fireworks show.

Also on July 23, the Harrisburg Senators (Class AA; Eastern League) will host a Star Wars tribute that is complete with a specialty jersey. Joining that promotion is a youth bat giveaway for fans 12 and under, plus a post-game fireworks display.

While it might be the last promotion highlighted in this feature, Star Wars night by the Buffalo Bisons (Class AAA; International League) is one of the most thorough in the minors. In every season since 2008, the Bisons have paid tribute to the film series with a wide array of promotions that have brought fans to Coca-Cola Field in droves, as the promotion has drawn over 117,000 spectators since it began and has led to sell outs in each of the last three seasons.

Taking place on July 23, this year’s Star Wars night is highlighted by a Darth Vader jersey, an all-black uniform top that features Darth Vader’s face and the TIE Fighter on the front with a Sith Lord Darth patch on the right sleeve. Also included in the promotion are character appearances, an on-field light saber battle, and a post-game fireworks display. The Bisons are selling Star Wars-night caps, with both fitted and adjusted options in red and blue colors.

There are plenty of great Star Wars promotions around the minors, a sign that the consistently-popular promotion is still going strong, and even more could be announced over the coming weeks. In the meantime, May the Fourth be with you!