You are here: Home › New logos, branding for Norfolk Tides
By Kevin Reichard on December 2, 2015 in Minor-League Baseball, News “We’re excited to unveil a new look that has a unique character and fun personality,” said Tides General Manager Joe Gregory. “The series of logos embrace the nautical nature of our community, giving our organization a contemporary look and feel. It was important for us to update our logo with a modern design while maintaining the Norfolk Tides moniker that has become synonymous with family-friendly entertainment in this area for more than half a century.”

The centerpiece of the new look, as designed by Brandiose, is a new trident-bearing sea horse, surrounded by “Norfolk Tides” written in historic naval lettering. Keeping with the nautical theme, the new Norfolk “N” is in the shape of an anchor. 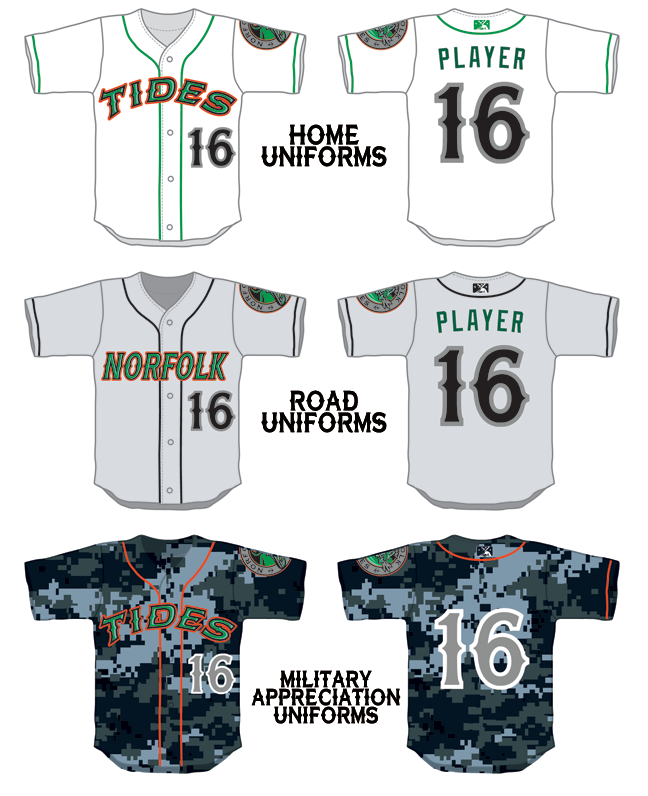 Three new uniforms were also unveiled. The redesigned white home uniforms feature green trim and showcase the team’s “Tides” lettering across the chest. The new green home cap features the Trident Sea Horse logo. On the road, the club will don traditional gray uniforms with “Norfolk” displayed across the chest, and black caps featuring the Anchor-N. “Working alongside Brandiose during this process was a tremendous experience,” Gregory said. “We’re thrilled with the identity they’ve created for us and we look forward to working with them again on other projects in the near future.”

“The Tides have big plans for Hampton Roads,” said Brandiose’s Jason Klein. “Our goal is to integrate local folklore in the Tides brand, and to create the most immersive entertainment experiences in the region.”