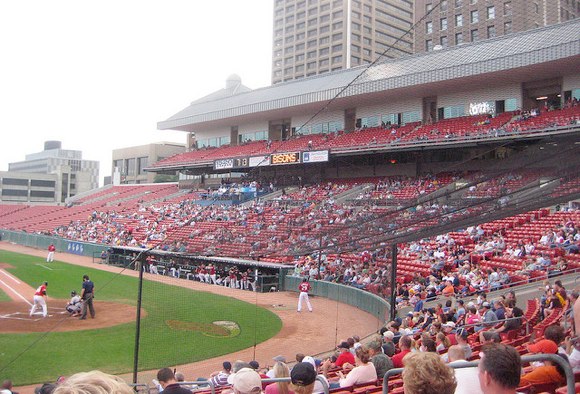 In the late 1980s, Major League Baseball was of a high mind to expand, looking for potential cities to host brand-new franchises. Into this fray leapt the city of Buffalo….

In the late 1980s, Major League Baseball was of a high mind to expand, looking for potential cities to host brand new MLB franchises. Additionally, there were several present franchises (the Pittsburgh Pirates and Montreal Expos, in particular) discontented with their current locale. Into this fray leapt the city of Buffalo, contracting Populous to build gorgeous new Pilot Field for the 1988 season. The diamond was planned to entice an MLB franchise. Instead, the now-renamed Coca-Cola Field has become a Triple-A landmark.

Pilot Field opened with one of the largest capacities ever for a minor league field, seating nearly 20,000 partisans with the possibility of adding an upper deck to double the ballpark’s size if and when the city was granted a Major League ballclub.  But it didn’t happen: The Pittsburgh Pirates did in fact move — from Three Rivers Stadium to PNC Park in 2001. The Montreal Expos also ended up moving — to Washington, D.C, in December 2004.  Meanwhile, Major League Baseball welcomed the expansion Colorado Rockies and Florida Marlins in 1993 and the Arizona Diamondbacks and Tampa Bay Rays in 1998. Buffalo, perhaps, was left at the altar. A small consolation:  the team changed affiliations from Cleveland to Pittsburgh entering the season.

But the fanbase was not dissuaded, packing in to Pilot Field to cheer on their Triple-A Pirates prospects to the tune of 1,186,651 rooters during the inaugural 1988 campaign, setting an all-time minor league attendance record. By way of comparison, the Chicago White Sox drew 1,115,749, the Seattle Mariners brought in 1,022,398, and the Atlanta Braves attracted 848,089 that same year.

Three years later, Buffalo broke its own record, totaling 1,240,951 fans during the 1991 season (and topping the Houston Astros, Cleveland Indians, and Montreal Expos in the process). In general, the grand list of highest minor league baseball season attendance marks is dominated by the proud natives of Buffalo, New York.

The Bisons re-partnered with the Indians in 1995, and Pilot Field briefly became known as Downtown Ballpark (due to naming rights payment difficulties) before being rechristened North AmeriCare Park midway through the year. Following the team’s 1998 championship season, the first league title in Buffalo in 27 years, the naming rights changed again, placing the Bisons in Dunn Tire Park for the next decade. A second championship followed in 2004, thanks in large part to middle infield dynamos Jhonny Peralta and Brandon Phillips.

The stadium gained its current name of Coca-Cola Field entering the 2009 campaign, as the team changed affiliations to the New York Mets. That partnership has now concluded as well; the Buffalo Bisons signed on for a partnership with the Toronto Blue Jays entering 2013.

Besides its abundant capacity and its history, Coca-Cola Field now gains notice for its scoreboard/videoboard installed in 2011; at 80 feet wide and 33 feet tall, it is the largest in the minor leagues. (Interestingly, the screen replaced a 40’ x 20’ videoboard that had boasted of its own largest status when it was installed in 1999. Times change in a hurry.)

The stadium itself is located directly in downtown Buffalo, with the skyline rising up over the wall in right-center. As such, public transportation makes arrival easy; the Metro Rail service brings a willing fan directly to the ballpark for little to no charge.