You are here: Home › Bobbletail surfaces in Clearwater
By Kevin Reichard on April 27, 2012 in Features, Minor-League Baseball 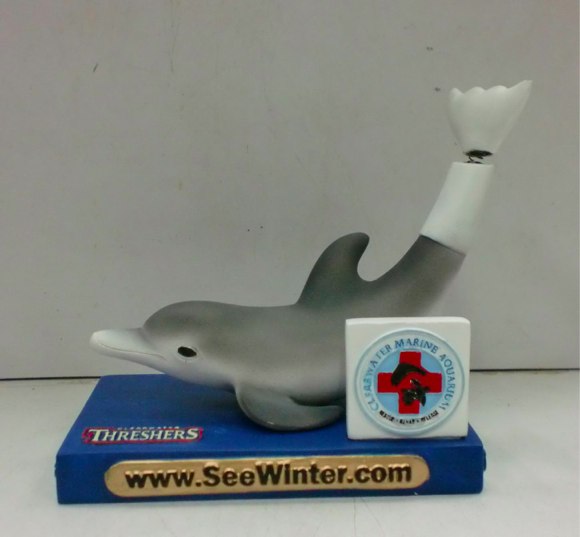 We’ve seen bobbleheads, bobblehands and bobblefeet given away at the ballpark. Now comes a bobbletail, courtesy of the Clearwater Threshers (High Class A; Florida State League).

At their June 1 game the Threshers are giving away a bobbletail of Winter to the first 2,000 fans at Bright House Field, as part of a community effort to support the Clearwater Marine Aquarium.

Winter, the bottlenose dolphin who was rescued off Florida’s east coast in 2005, has inspired millions with her story of survival. After being discovered trapped in a crab trap line at just two months old, Winter was brought to the Clearwater Marine Aquarium to begin a recovery and rehabilitation program. Winter was fitted with a prosthetic tail and has since thrived as a celebrity in Pinellas County. Already a local legend, Winter was introduced to a global audience in 2011 when she starred as herself in the box office hit Dolphin Tale. The film was the top box office seller upon its second week in theaters.

A portion of all ticket sales will go to benefit Clearwater Marine Aquarium and its programs for animal rescue and rehabilitation.

“We are so excited to partner with the Clearwater Threshers,” said Linda Kay O’Reilly, vice president of Development for the Clearwater Marine Aquarium. “Their help in fundraising is a great support to us – and a fun community outreach opportunity as well.”

The event is also sponsored by the Tampa Bay Times and the Clearwater Beach Chamber of Commerce.