You are here: Home › Remembering the Polo Grounds
By Kevin Reichard on January 19, 2011 in Features, Major-League Baseball 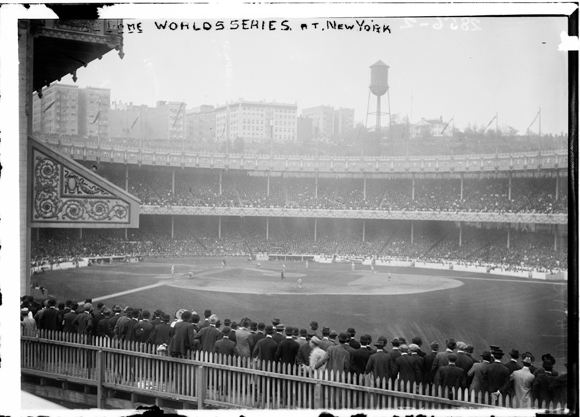 It wasn’t the most glamorous venue in the major leagues, nor the most stylish. But the Polo Grounds — the former home of the New York Giants and, briefly, the New York Yankees and New York Mets — will receive its due this weekend, as the San Francisco Giants and Willie Mays will bring the team’s 2010 World Series Trophy to the ballpark site.

Despite the name, polo was never played at the final version of the Polo Grounds pictured above. The third and fourth versions of the Harlem ballpark were located below Coogan’s Bluff, at West 155th Street and Eighth Avenue. It’s the final version that people remember: opening in mid-1911 as the home of the New York Giants, this ballpark was known for pro baseball (in addition to the Giants, the Yankees played there after Hilltop Park and before Yankee Stadium opened; the Mets played there before Shea Stadium opened) and pro football (including the NFL’s Giants and the AFL’s Titans). It was where the Giants won championships, where Willie Mays first made his mark, where Bobby Thomson launched his famous home run.

Once the Giants left, the ancient and crumbling ballpark was inevitably headed to the scrap heap: in 1964 it was torn down with the same wrecking ball that took dow Ebbets Field. There’s little left of the old place, past a commorative plaque, a playground named after Mays, and a refurbished staircase — the Brush Stairway, donated by John T. Brush, the former owner of the Giants — leading down from Coogan’s Bluff. It still bears the original inscription: “The John T. Brush Stairway Presented by the New York Giants.”

Richard Sandomir of the New York Times has a loving look at the old place.

RELATED STORIES: Remaining piece of Polo Grounds to be refurbished

Photo courtesy of Library of Congress, LC-DIG-ggbain-14491. From the Bain Collection. Photo taken during 1913 World Series. Click on the image for a larger version.