If you seek the ultimate sense of baseball history and enjoy being around passionate and remarkably knowledgeable fans, it can be no surprise that Yankee Stadium will top your list. If your expectations include the most-modern conveniences and a pampered existence that go beyond the essence of the game itself, then it’s time for an attitude adjustment. This is from our 2005 visit to Yankee Stadium, former home of the New York Yankees (1976-2008). 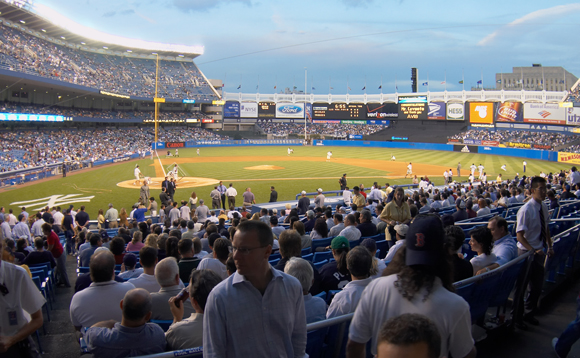 Yankee Stadium and the cast of characters that come with it will provide you with a unique New York experience. Obviously, the die-hard baseball fan will drink in every facet of the visit (possibly literally), but the experience will be equally entertaining for the novice and casual observer, as well.

The most storied stadium in major-league baseball, Yankee Stadium has served as home to the legendary New York Yankees teams of the 20th century as well as most of the brightest stars in baseball, including Babe Ruth, Lou Gehrig, Joe DiMaggio, Mickey Mantle, Roger Maris, Ron Guidry, and Reggie Jackson. Known world ’round as “The House That Ruth Built,” the stadium opened in April 18, 1923 with Babe Ruth as the marquee player. Appropriately, the opponent that day was Ruth’s previous team, the Boston Red Sox.

Yankee Stadium was conceived out of dire necessity in 1921 after the team was booted from its shared home at the Polo Grounds by the New York Giants. With the Yankees and Ruth outdrawing their counterparts, Giants management informed the Yankees that the team must leave the Polo Grounds as soon as possible. So the team went out and bought 10 acres in the Bronx from the estate of William Astor. Flush with box-office revenues thanks to Ruth, Yankees management originally planned a massive stadium seating over 100,000. The first plans for Yankee Stadium were on the imposing side: a triple-decked, roofed stadium. This design was scaled back to the current design: three decks in the horseshoe, with bleachers and scoreboards in the outfield. The price was a then-astronomical $2.5 million. At one point Yankee Stadium could house 80,000, but eventually that number decreased to 70,000; the 1976 remodeling brought the number down to the current 57,546.

Some definite quirks existed in the original Yankee Stadium. For instance, in 1932 the Yankees placed a monument to manager Miller Huggins in the spacious center field that originally measured 490 feet. As the years went by and more Yankees notables passed away, the team constructed additional shrines in Monument Park. This was a live area, and more than once a center fielder was frustrated as a deep shot bounced around among the monuments.

Yankee Stadium remained relatively unchanged until 1973 when the Yankees vacated Yankee Stadium for two years (playing at Shea Stadium) while the ballpark was redone from top to bottom. Very little of the old stadium remained: the actual playing surface was lowered; steel supports were removed and the upper decks were cantilevered for a better view of the field; wider seats were installed, leading to far less of them; the original roof was removed; a replica facade was placed on the upper deck; three escalator towers were added; and a “telescreen” was added for instant replays. Monument Park was preserved to the greatest extent possible with the monuments kept in place behind the center-field wall. Get to the ballpark early in order to see the display. With any ticket other than the Bleachers, you can visit Monument Park as soon as the gates open (two hours prior to game time) up to 45 minutes before the first pitch. Access is via the staircase at the end of the aisles between the Field and Main level seats at Section 36. In total, the Yankees have retired the numbers of 16 players, not too surprising when you consider their better than two dozen World Championships. With plans for a new stadium by 2009 across the street to the north at what is now Macombs Dam Park, the essence of Monument Park will be kept in its entirety at the new location. Heavens, you shouldn’t disturb the spirits of Maris, Mantle, Gehrig and Ruth — even if the Curse of the Bambino was vanquished in 2004. Until construction starts, though, the Macombs Dam Park is a nice place to throw a ball around before the game in the shadows of the old stadium.

Every seat is nicely angled toward the infield action. The stadium is essentially divided into two areas – the main stadium horseshoe and the bleacher area. Although the right field bleachers are relatively good seats for $12, you have no access to the main stadium area and you’ll go without beer. The Yankee bleacher bums made those cheap seats infamous over the years, but the no-alcohol policy has pretty well cleaned up the situation. In the main stadium, Tier Reserved sections 13-14 are also non-alcohol – and value-priced at $19. Rows A-E are especially desirable – fewer seats to the row and closest to the action.

The better bet is the main stadium seating. The best Yankee tickets are difficult to score – at least through conventional channels. Season tickets at the seven highest levels, from Field Championship to Main Reserved MVP, are all sold out in advance. 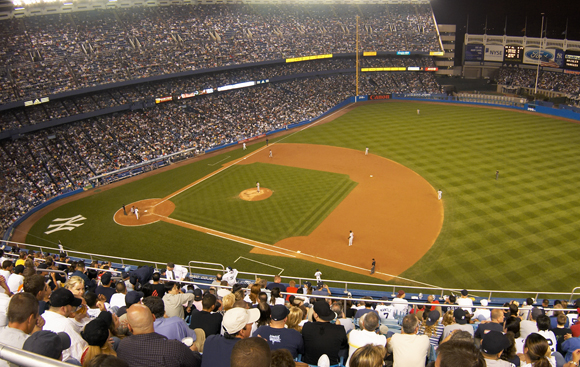 However, for a price you should be able to locate some quality ticket offers by contacting a broker. For most games, the best selection of tickets available will be at the spacious Tier level (third deck). All Tier Box MVP tickets ($45 in advance) give you a good view of the action. Less desirable are the Tier Boxes ($40). Most often, you will usually find nearly as good a seat in the $19 Tier Reserved sections.

You might want to entirely avoid Tier level seating, especially if you have any fear of heights. The steep angle is conducive to viewing the game, but prompts some fans to complain of vertigo. Your best value in the lower levels are Main Reserved ($40), especially sections 19-22 near first and third bases, and sections 33-36 at either end of the horseshoe inside the foul lines. All of the Main Reserved seats offer you shade and weather protection from the overhang. The Yankees provide many good seating opportunities for fans in wheelchairs and their companion – at a significant discount. Without commenting on the owner himself, this is one of several classy touches provided by the Yankees management.

You might want to get to your seat early. The concourses on every level are very tight, making it difficult to navigate quickly as game time approaches. Yankee fans have many favorable attributes – and getting to the game early is one of them. Consequently, the squeeze presented by narrow concourses is considerably alleviated. The original Yankee Stadium was a nightmare if you needed to use the bathroom – there weren’t nearly enough of them. The 1976 renovation somewhat improved the situation, but you still have a tight squeeze here compared to any modern venue. An interesting touch is the women’s restrooms finished in baby pink wall tiles and flooring. The reaction from my companion was “very 1950s.” CONCESSIONS
Food choices are fairly standard for the most part, and you will pay New York prices (typically 25 cents higher than the prices at Shea). The selection of hot dogs and sausages are especially broad with quality Hebrew National kosher wieners a featured item ($4.75). With some effort, you can find some more exotic fare, including Wok & Roll Chinese and sushi, a stand featuring “Imported Beers of the World” (as well as premium domestic brands), and a very popular fresh-squeezed lemonade stand ($4.75). Tier Level concessions are on par or better than Main and Field level; Loge Level offerings are limited (with most food service provided within the club and loge seating areas).

Ballpark vendors at Yankee Stadium probably are the most entertaining and knowledgeable you’ll ever find. They have a good selection of food and beer, and they regularly come to every corner of the ballpark. Unlike so many other venues, you find that most of the good times happen right at your seat. Yankee fans know the game and they love to visit with their neighbors when there’s a lull in the action. If the team falls behind, the fans get even more engaged as look forward to another patented Yankee comeback.

By state law, smoking is prohibited throughout the ballpark. The Yankees drive the point home tersely with signs stating, “Smokers will be ejected.” Much the same as attitude is expressed toward bringing in large bags – not at all surprising in the post-9/11 era. “All bags should be left at home/work,” the stadium guide states. Many vendors along River Avenue (east side of the stadium) will offer you a bag check -– even if your bag is considerably smaller than the 16”x16”x8” maximum allowed. FOR THE KIDS
Other than playing catch at the park near the stadium, you won’t find much to keep the kids entertained at this venue. The highlight might be food – pick from hot dogs, lots of ice cream offerings and lemonade.

BEFORE/AFTER THE GAME
You can take your pick of bars and restaurants and souvenir stands catering to Yankee fans along River Avenue directly across from the stadium. One of the more popular watering holes is Stan’s Sports Bar and Restaurant. Your best bet for a truly New York deli sandwich experience (but not open after a night game) is the Court Deli – located two short blocks east of the stadium at 161st St. and Walton Ave. The Bronx Courthouse is located across the street. Quite a wide variety of restaurants are available in this area, but none nearly as popular as the Court Deli. As for other areas around the stadium, you won’t find much interesting to do and some parts of the neighborhood are not very safe.