Goodbye, PGE Park. With the former football stadium and racetrack slated for a conversion to an MLS soccer stadium in coming months, Portland will once again be without baseball. Here’s a look at PGE Park when it served as the home of the PCL’s Portland Beavers. Year Built: 1926; rebuilt 2001
Capacity: 20,000 (including 19,566 seats)
Dimensions: 319L, 405C, 321R
Parking: There are several public parking lots within a block of the ballpark, including a larger one at the corner of 18th and Salmon. There are a slew of parking restrictions in the area surrounding the ballpark, so be prepared to either pay for a lot or take the bus.
Address/Directions: 1844 SW. Morrison, Portland. The ballpark is located directly west of downtown Portland; on a nice night you can walk the half mile from downtown proper to the ballpark. The ballpark is easy to find: I-405 runs four blocks east of the ballpark, and PGE Park exits are clearly marked. Multnomah Stadium was originally built as a football stadium in 1926, and it shows at PGE Park, which retains the feel of a football facility that happens to host baseball, particularly with the long grandstand down the first-base line and the Green Monster-like wall in left field.

It’s gone by several names in its history. Most recently, the former Civic Stadium underwent a $38.5 million renovation before the 2001 season began to make the park usable for a Class AAA Pacific Coast League team. Whether the renovation was misplaced nostalgia or a wise investment can be debated, but the end result was a facility that is among the most unique in professional baseball.

The renovation added the following:

All in all, this is a pretty comfortable place to watch a game. A roof covers the grandstand seating, which can be handy during a wet Portland summer. Ellerbe Becket, which oversaw the renovation of the ballpark, added many features to give it a old-time feel. The wall in left field reminds one of the Green Monster in Fenway Park; it has similar dimensions and is painted a similar green. There are three scoreboards at the ballpark, including a manual scoreboard in left field featuring a large clock; the other electronic scoreboards feature scores and images. An organist performs between innings. The concessions are limited; while the concourses have been expanded, you’re not talking about a state-of-the-art ballpark with wide concourses providing views of the action. There are six concession stands, including a beer-only stand.

If you’re the kind of person who likes to be on their feet during a game, there are a few places to watch the action. The very popular Widmer beer garden down the right-field line features food as well, while the Fred Meyer Family Terrace is located in the left-field corner. In addition, an area over the wall in left field features picnic seating.
HISTORY
PGE Park began life in 1926 as Multnomah Stadium. Before that, the ballpark site was a gathering ground for Portland. In 1891, the Multnomah Amateur Athletic Club leased the site and set up a playing surface, complete with a small grandstand in the northwest corner of the field near the current grandstand area. Events of all sorts were held at the field: baseball, football, track and field, cricket, presidential addresses and bicycle races were some of the many events played there. 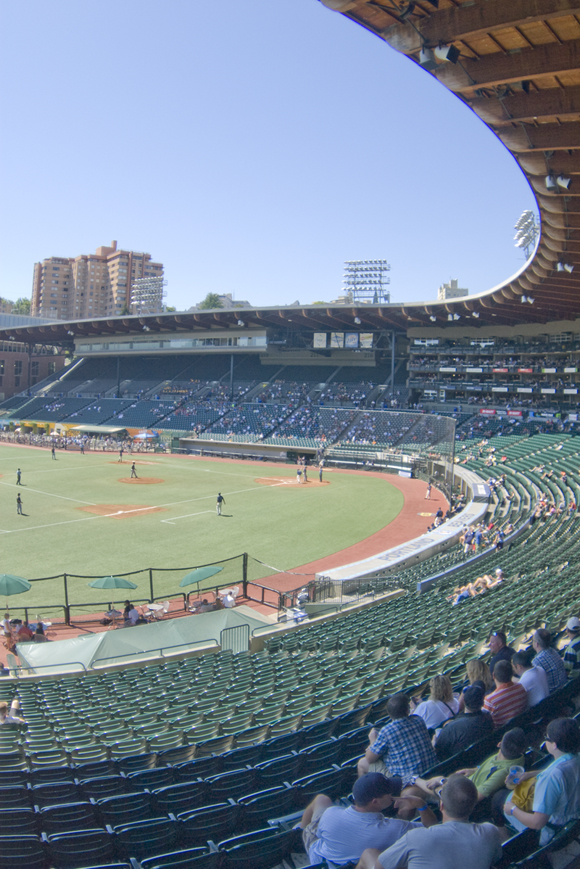 The first professional baseball at the field was played in 1905, when the Lewis and Clark Exposition forced the PCL Portland Giants from their regular home, Vaughn Street Park.
At that time the stadium consisted of a 3,000-seat grandstand and the Exposition Building, considered the largest wooden building west of the Mississippi. That much wood certainly represented a huge fire hazard, and on July 14, 1910 the building and the grandstand burned down; the fire was so intense that the steel girders supporting the grandstand melted.

The grandstand was replaced the following year, but it was clear Portland needed a large facility, and by 1925 officials with the Multnomah Amateur Athletic Club laid out their plans for a new 28,000-seat Multnomah Stadium. To raise money for the $500,000 project, organizers sold personal seat licenses: $100 gave the buyer the right to a seat at the stadium for five years and the chance to renew for another five years. The funding drive was a success: within two months $300,000 in seat licenses had been sold, and construction began.

The original design called for a full horseshoe, but the athletic club could not acquire all the land on 18th Avenue to complete the horseshoe, leading to the unique dimensions still seen at PGE Park. Construction was done by the fall of 1926, when the stadium hosted its first football games. Financially, however, football was not enough to pay the bills, and between 1933 and 1955 the stadium’s main tenant was the Multnomah Kennel Club, which held dog races.

Baseball did not arrive at Multnomah Stadium until 1956, when the PCL Portland Beavers moved to the stadium from Vaughn Street Park, a wooden facility from the turn of the century that finally gave up the ghost. When the Beavers moved, legendary groundskeeper Rocci Benevento took up the turf from Vaughn Street and installed it at the team’s new home. The 1968 season was the last one to feature play on real grass, as Civic Stadium (as it became known after the athletic club sold the stadium to the city) became the first minor-league park to feature artificial turf with a 1969 installation of Tartan Turf. Installation did not proceed on schedule, however, and the Beavers played some games with the rubberized base exposed.

After the Portland Beavers left in 1993, city officials worked to bring back a Pacific Coast League team, though the Portland Rockies ended up being a huge draw for the Northwest League in 1995-2000. It was clear Civic Stadium was not up to PCL standards, so it was clear that the city would either need to renovate Civic Stadium or build a new facility should the PCL return to Portland. The decision was made to renovate Civic Stadium, and the rebuilt PGE Park opened to acclaim in April 2001.