Led by founding principal Jonathan Cole, Pendulum has started an interesting conversation about how a new ballpark in Kansas City could be planned, if the Royals eventually decide to pursue that facility option. Under a vision released Thursday, a 30,000-capacity ballpark would feature 26 premium suites and be part of a larger project that includes eight new restaurants, 1,000 housing units, 2.5 acres of green space, and 50,000 square feet of commercial space. As part of the designs, a site plan shows the ballpark at a location bounded by 10th Street to the north and 12th Street to the south, between Cherry Street to the west and U.S. 71 to the east. Along with Pendulum, the group behind the plan includes Port Fonda chef/owner Patrick Q. Ryan and designer/artist/sculptor Dale Frommelt. The idea for the ballpark project would be to create an area that receives activity on a year-round basis, offering plenty of amenities that draw visitors outside of game days. One thing that the group has made clear, both on its website and in followup interviews, is that this plan was not solicited and that the Royals did not reach to the firm. However, Cole emphasized that they hope the concept sparks a conversation about what could be if the Royals do eventually pursue a new downtown ballpark.

Their renderings show a monster scoreboard, a BBQ-centric theme, a dog park, a sky pool, a food hall and housing along the eastern boundary to act as a sound barrier to 71 Highway.

“Unsolicited,” Cole noted. “The Royals did not reach out to us.”…

Cole said everything from the location to what’s inside is up for discussion and could change based on input from fans and stakeholders.

“This is just the beginning to start the conversation, to think about what could be,” Cole said.

The Royals are currently locked into a Kauffman Stadium lease that runs until 2031, an agreement that came after Jackson County voters decided in 2006 to approve a 0.375 percent sales tax hike to upgrade it and neighboring Arrowhead Stadium, home of the NFL’s Chiefs. Still, there has been a continual desire among some in Kansas City–especially those in the downtown business community–for the Royals to seriously consider a move downtown in the future. Speculation about what the team could pursue in the future has picked up in recent months, following the introduction of John Sherman as the team’s new owner in the fall. For his part, Sherman has sounded open to the idea of eventually exploring a downtown ballpark since purchasing the team, but has not settled on long-term plans nor has he ruled out the prospect of making further renovations to Kauffman Stadium.

With that in mind, it could take considerable time to determine whether the Royals would move downtown. If the team does explore that process, expect conversations about the site, funding, and design to evolve considerably over what would likely be a years-long planning process. At the very least, however, Pendulum’s vision should prompt some discussion about what a downtown Kansas City ballpark could look like and how it could tie into the surrounding area. 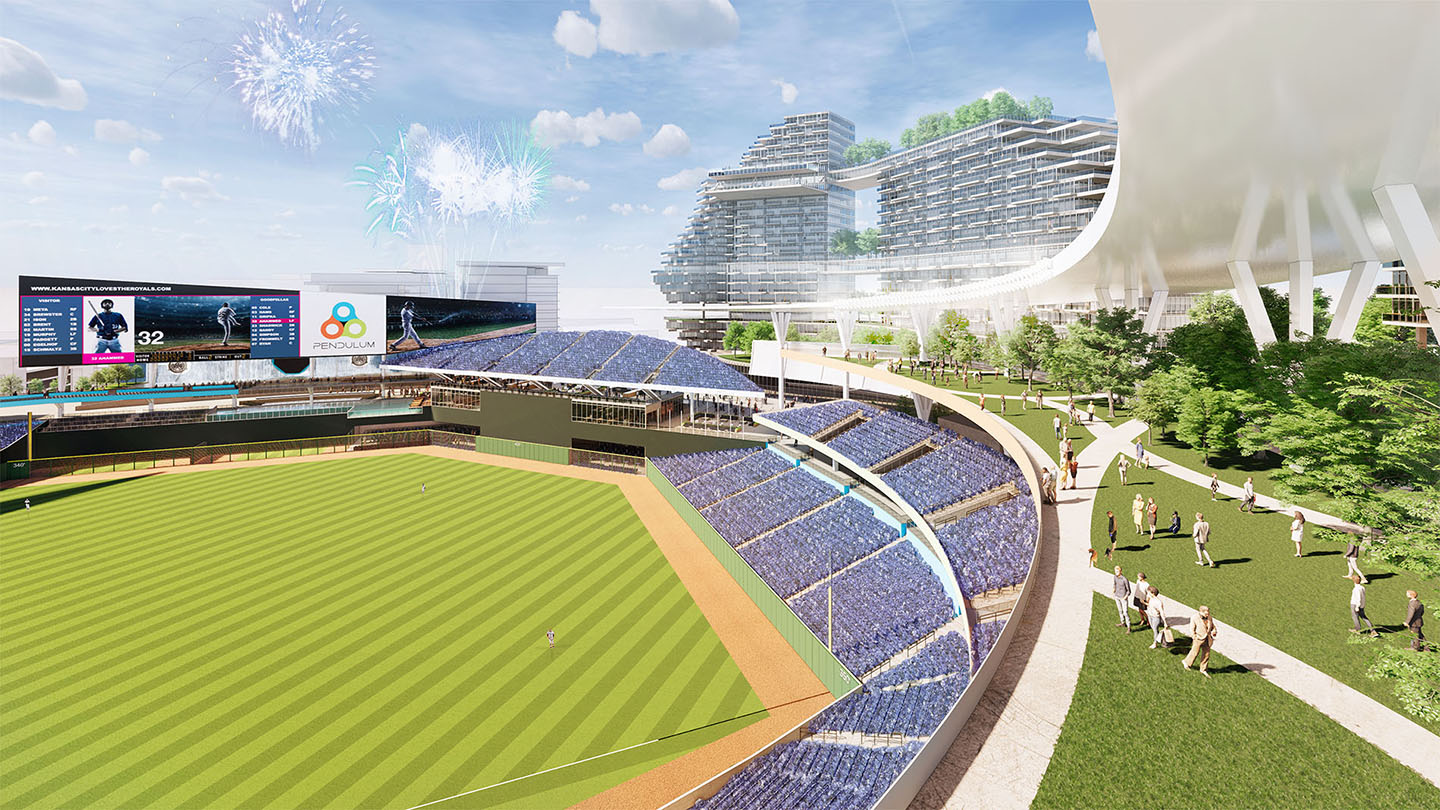