You are here: Home › Citizens Bank Park Upgrades: Enhancements for Every Fan
By Zach Spedden on July 2, 2019 in Features, Major-League Baseball, Visits Thanks to concessions upgrades, new selfie spots and other recent improvements by the Philadelphia Phillies, Citizens Bank Park offers a refined gameday experience that caters to multiple types of fans.

Citizens Bank Park opened its doors in 2004, giving the Phillies a ballpark that reflected current design trends after they spent more than 30 years at the multipurpose Veterans Stadium. The ballpark has since aged well over its years of operation, due in no small part to the aggressive approach that the Phillies have taken in recent offseasons to complete multifaceted upgrades. Prior to the 2019 season, the Phillies executed a renovation that fuses modern fan interests with the team’s history, rolling it all into a revamped concessions experience. Located near Citizens Bank Park’s third-base entrance gate, the renovated area includes visible changes both in and outside the facility. Prominently featured outside the ballpark is the second and final Liberty Bell displayed at Veterans Stadium. After being mounted on Veterans Stadium’s catwalk above center field from 1983-2003, the bell was out of the public light for years following the facility’s closing and demolition. It is now back in action, however, after being restored and given prominent display by the Phillies as part of their Citizens Bank Park upgrades for this season. We will have more on the Liberty Bell in a Ballparks That Live On piece later this week, but for now it can safely be said that the Liberty Bell is a visible presence at Citizens Bank Park and has already become a popular selfie spot for fans.

As part of the 2019 upgrades, 24,500 square feet of space adjacent to the Third Base Plaza was converted into Pass and Stow, a new destination with indoor and outdoor amenities. Taking over an area previously occupied by McFadden’s, Pass and Stow—named for Philadelphia foundry workers John Pass and John Stow, who recast the original Liberty Bell in 1753—features an interior space billed by the Phillies as a family-friendly sports pub. It provides plenty of televisions for fans to follow the action, along with an apparent attention to detail with its artwork, which celebrates the team’s history with images of vintage logos and programs, design plans for Veterans Stadium, and more. 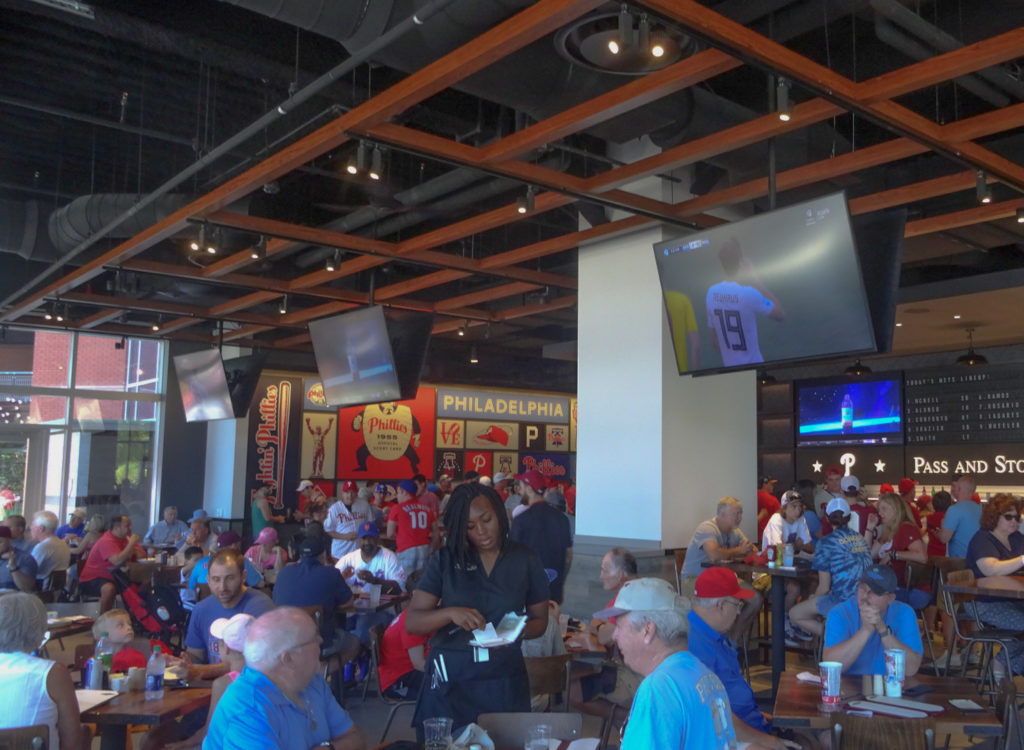 In the outside space, fans are served by a beer garden, Goose Island Bar at the Park, and Foundry Pizza. While this area does not offer a view of the playing field, it does provide plenty of protection from the sun—an apparent need for many fans who sat through the warm weather conditions of the game we attended—and a gathering place that reflects the increasing trend of social spaces in modern ballpark design.

Improvements to the ballpark’s concession offerings for 2019 extended to an adjacent area, where a 120-seat Shake Shack was added. The seating in this space encourages a social atmosphere, with fans able to sample their favorites from Shake Shack’s menu and take in the action on televisions. On their own, the improvements completed prior to the 2019 season mark significant changes to the concession offerings at Citizens Bank Park. Not only did the Phillies add new food and beverage items to the ballpark’s slate, but they also tapped into the trend of creating unique gathering places. The upgrades for 2019, however, are just part of a larger story at Citizens Bank Park, as they build off of improvements the Phillies executed before the 2018 season.

A walk along the outfield concourse will reveal most of the changes completed over the 2017-18 offseason. In left field, fans can find Boardwalk Eats, featuring several concessions stands. Among them is Bull’s BBQ, named in honor of former Phillie Greg Luzinski, whose nickname was The Bull — a Citizens Bank Park fixture that was relocated prior to last season, moving into a new prominently branded stand. In a touch that appeals to families, the Phillies added The Yard, a kid’s area with several distinct offerings, including the Citizens Bank Phan Field—a WIFFLE Ball field designed as a downsized replica of Citizens Bank Park. Food and beverage offerings are also a key part of the experience in The Yard, catering to families with a kid-friendly concession stand along with a bar area for adults that includes beer, wine and cocktails. Another upgrade completed ahead of 2018 was the displays added to a renovated Left Field Plaza, which serve as something of haven for those looking to capture some Philadelphia baseball history while attending a game at Citizens Bank Park. Upon entering the left-field gate, fans are greeted by large retired numbers—including Richie Ashburn’s number 1, Mike Schmidt’s 20, Robin Roberts’ 36, and others—and replicas of World Series trophies from the Phillies’ titles in 1980 and 2008. The Philadelphia Baseball Wall of Fame is also displayed in this area after being relocated from Ashburn Alley.

When considered in tandem, the upgrades for 2018 and 2019 accomplished a few objectives for the Phillies. The concessions experience at Citizens Bank Park was refined, not only by relocating existing stands like Bull BBQ and renovating areas like Pass and Stow, but through the incorporation of areas where fans can gather to enjoy a drink or a bite to eat. Touches that recognize the team’s history—from the restored Liberty Bell at third base to the retired numbers and World Series trophies in left field—can please baseball pursuits with their attention to detail in recognizing and celebrating the past, while appealing to more casual fans by serving as a unique backdrop for capturing a day at the ballpark.

Certainly, Citizens Bank Park has held up well over its 16-plus seasons of operation. With the recent improvements, the Phillies have assured that Citizens Bank Park offers a little something for all types of fans, positioning the ballpark to continue serving the franchise well as it moves forward.