When the Milwaukee Brewers open their home Cactus League schedule today, they’ll also be ushering in a new era in team spring-training facilities, unveiling the renovated and renamed American Family Fields of Phoenix. We toured the complex before the grand opening.

The old Maryvale Baseball Park opened in 1998 as the spring home of the Brewers and was largely unchanged since then. What was considered state of the art in 1998 became dated over time, and it was clear in recent years the facility was not working optimally either for players or for fans. After making the decision to stay in Phoenix, the Brewers then worked with the city on an accelerated 10-month construction/renovation plan designed to improve player training facilities while presenting a more welcoming stance to the Maryvale community and Brewers fans.

“We wanted to create a public space where the Maryvale community felt welcome,” said Mo Stein, Principal, HKS Architects. “Instead of turning its back to the community, the new layout is inviting.”

With such a tight construction schedule, steps were taken to streamline the process. While it looks like multiple buildings were added, it’s actually one large building on the right-field side of the ballpark comprising clubhouses, front-office spaces, the team store and new concession stands. There is a definite Arizona feel to the finishes: precast concrete was used throughout the space, painted in earth tones. (You can get a good feel for the textures and colors in the photos below.)

Part of the challenge in renovating Maryvale Baseball Park into the new American Family Fields of Phoenix: a relatively small footprint of 60 acres. That meant tearing down a separate Minor League clubhouse and forsaking some parking in order to add a new, large building as well as a new practice field (built with Miller Park’s dimensions) and an agility field that opens to both the MLB and MiLB areas. That new building serves the needs of both the business operations and the player development, while other changes for both fans and players were implemented throughout the complex. Left largely intact: the old training fields and the main parking lot–but they’ve been altered to encourage more interaction as fans head from their cars to the ballpark. 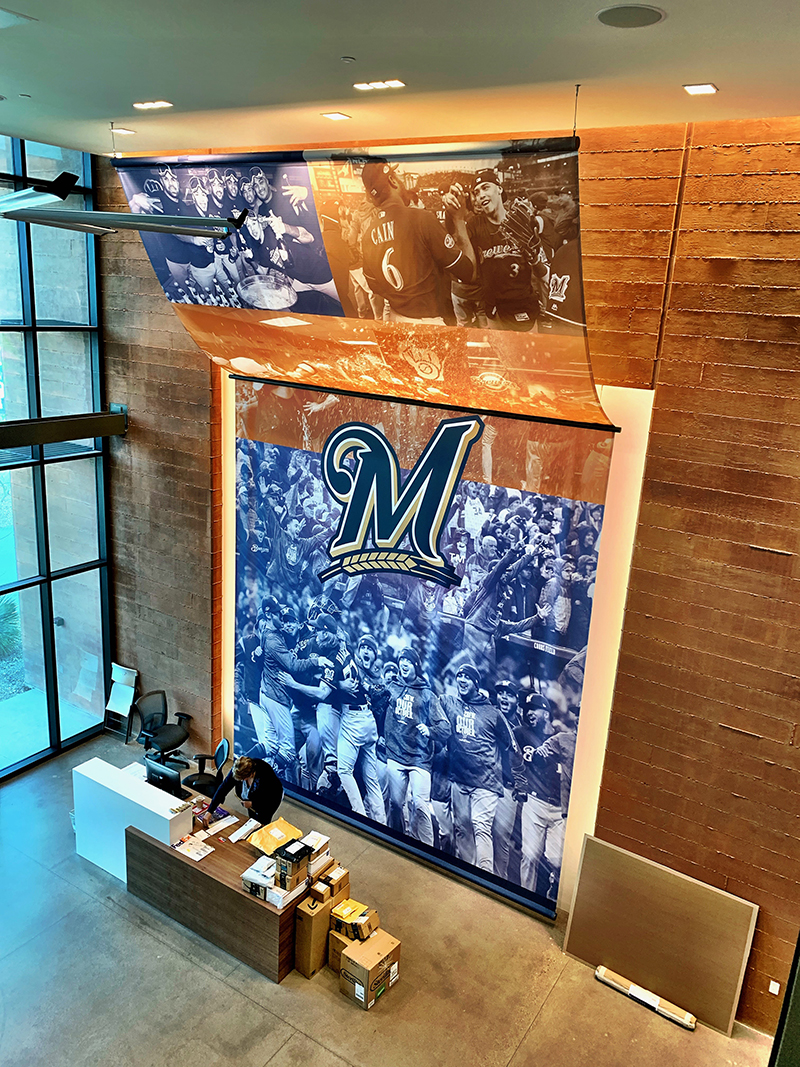 For the Fans: A More Inviting Experience

For the fans who show up for today’s opener, American Family Fields of Phoenix will provide an updated experience reflecting what’s been implemented in other Cactus League spring-training facilities. A new team store is three times larger than the old team store. Multiple ticket offices will serve fans coming in from both sides of the ballpark.

One thing that couldn’t change: the fan parking south of the ballpark. The walk is now designed to be a more pleasant experience, with most fans expected to take a route through the old practice fields before entering the grand plaza. Fans are expected to linger there and take plenty of selfies next to the displays honoring retired numbers and the associated players, like Rollie Fingers. You can’t build a ballpark these days without the requisite selfie spots, and the current installation is expected to grow to 10 or 12 numbers in coming years.

Once inside the ballpark, there were some subtle upgrades to the seating bowl. Gone are the bleachers down each line, replaced by new seating that matches the existing theater-style ballpark seating.

“Instead of implementing value engineering, our owner asked us how we would spend even more money, and that allowed us to do things like replace the bench seating,” said Tyler Barnes, Senior Vice President–Communications and Affiliate Operations, Milwaukee Brewers.

To the naked eye, it’s hard to see where the old seating ends and the new seating begins unless you were very familiar with the old Maryvale Baseball Park design. That continuity can be seen throughout the ballpark, and it was an important design point for Brewers management.

“I was thrilled when I saw the new seats match the old ones,” said Barnes, who was intimately involved with the design and implementation of the new construction. “We wanted the old and the new to blend together throughout the complex, and (HKS) did a tremendous job in doing that.”

The new larger concession spaces are father off the concourse, allowing for better crowd flow. They also have one feature not found in the old Maryvale Baseball Park concession stands: concession workers can actually cook in there instead of distributing food prepped in a commissary, allowing for a fresher approach. (A new commissary was added to the mix, however, expanding food-prep options.)

The other change fans will notice: Gone is the antique scoreboard, replaced by a new videoboard from Daktronics.

One of the big appeals of the old Maryvale Baseball Park was the intimate atmosphere, with a seating bowl where you never felt too far from the players. That feeling is still present, and maybe enhanced a little. Brewers players will still enter the ballpark from a right-field-line gate and stroll to their dugouts or the bullpen. A new visitors clubhouse in the left-field corner does change things up. Visiting players will need to cross the concourse via a roped line to enter the playing field, and we’re guessing this area will be rather congested once word gets out. For the Players: A Different World

Fans won’t see the many features on the player side of the new team building. It’s large enough to serve all the team player, scouting and business needs. This is a year-round facility: besides hosting some scouting and business functions, American Family Fields of Phoenix also hosts two Rookie Arizona League teams.

An agility field is designed as the crossroads of the player spaces, with both MLB and MiLB clubhouses opening out to the field, as well as a 4,800-square-foot weight room. The agility field features a full infield and is already used for one-on-one instruction; during our visit several pitchers were receiving some personal coaching, (The photo above shows the agility field and the clubhouses still under construction, with the weight room in the middle, accessible by the rolling garage door.) The new 106,298-gross-square-foot clubhouse includes baseball operations, sports medicine and psychology and executive office spaces. In this new building, the 82,000-square-foot expansion combines major and minor league operations under one roof. Sports medicine and psychology spaces, and executive offices total 24,000 gross square feet. A Minor League space will also be used as a learning lounge, where free tutoring will be offered to neighborhood students via a partnership between the Brewers and Grand Canyon University.

There are some shared facilities, including the aforementioned workout space and a huge hydrotherapy room featuring six tubs and one SwimEX rehab pool. 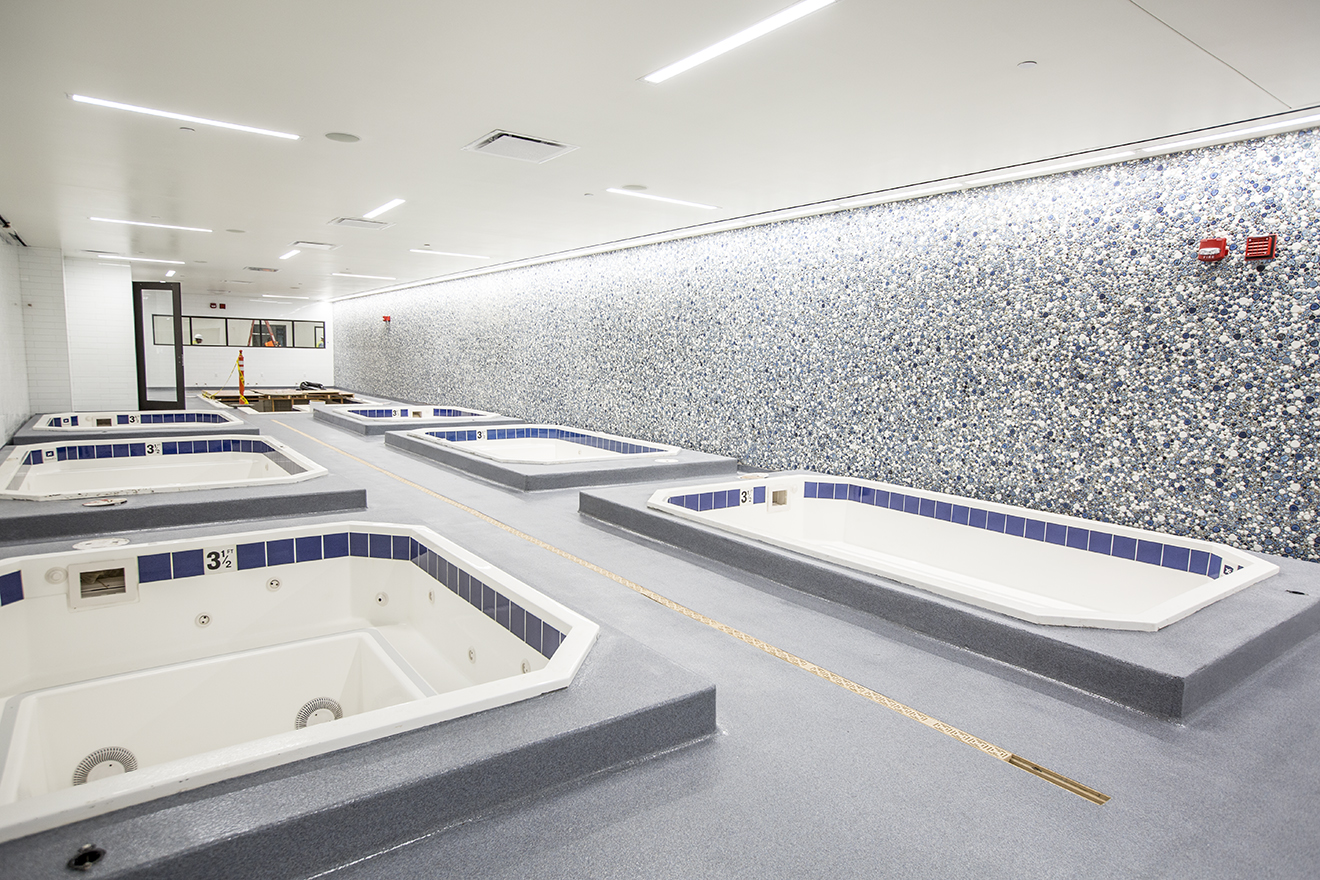 One design element present in the player spaces: an emphasis on Brewers tradition can be found in the player areas, where there are plenty of displays highlighting Brewers history, including listings of numbers with all the players who wore them, players by decade, team award recipients, all the team logos (including the Seattle Pilots 1969 logo, the famous Beer Barrel Man logo and the iconic MB glove logo). On the minor league side are displays for the rookies making their 2018 debuts. Also found throughout the complex: aphorisms from famous names in Brewers history. According to Barnes, Brewers Manager Craig Counsell advocated for both the player recognition and the use of positive phrases as a subtle motivational tool.

Also new on the player front:

One change that should be felt by both players and fans: a more cohesive design that better represents the Arizona locale. While there’s still plenty of signage that needs to go up to reflect the recent announcement that Madison (WI)-based American Family Insurance had purchased naming rights to the complex, fans will get a good idea of how the new signage will look based on what’s already up. The old Maryvale Baseball Park featured a combo of Arizona colors and Brewers blue, and while there’s plenty of blue in the bowl thanks to the seats and outfield wall, the Arizona colors and theming should dominate. The outfield plaza, designed to host events apart from Brewers baseball games, sports an abundance of local plants.

“In the end, it was a stressful process,” he said. “But appropriately stressful, and that’s good.”