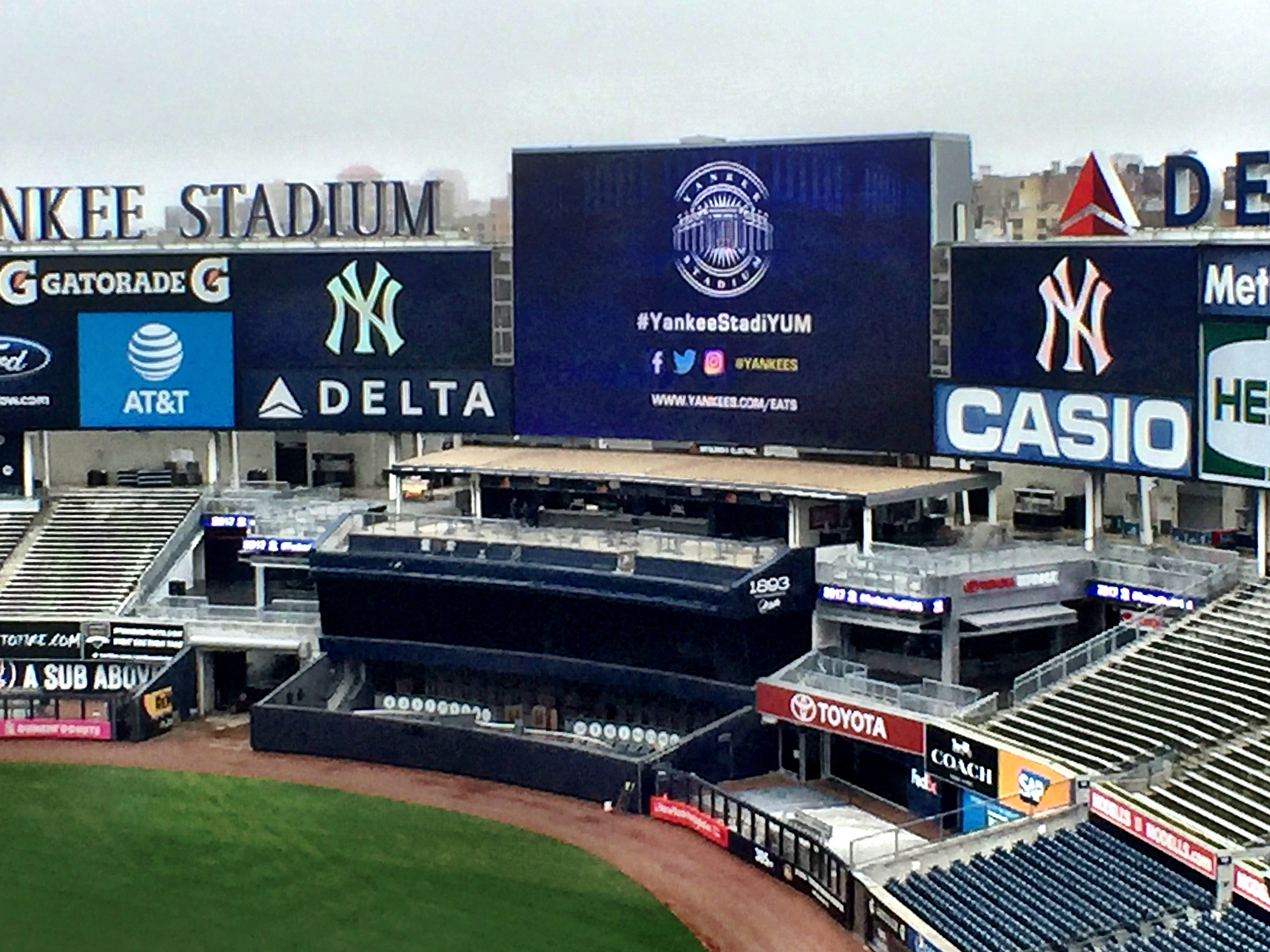 With an overhaul of prominent Yankee Stadium spaces to encourage socializing at the ballpark, the New York Yankees are working to attract casual fans who are less into baseball and more into the social scene—certainly the biggest trend in sports venues today.

The changes were unveiled at today’s season opener and previewed last week at the annual Yankees Media Day. They were inspired by season-ticket-holder surveys, as well as observations of how other MLB teams were successful in expanding their fan base to encompass millennials and social-media mavens. A good example: How the Colorado Rockies took an underused area in Coors Field and turned it into one of the hottest tickets in Denver by creating social spaces.

“We’ve been seeing a change in how fans view the game in the past several years,” said Kevin Dart, Vice President, Ticket Sales, Service and Operations. “You have your purists who care only what happens on the field, and then you have the more casual fans who want to socialize at the ballpark.

“We’re working to create an experience for every kind of fan, from those purists to the socializers.”

The new social spaces are a natural extension of the changes unveiled this spring at Steinbrenner Field, where an expansion of the team’s spring-training home incorporated new group areas, more locations for socializing with friends and more selfie spots for social-media mavens. The changes were thoughtful: instead of expecting fans to remain in their seats for nine innings, the Yankees encouraged them to spend their time circulating through Steinbrenner Field.

Though not directly related to the Steinbrenner Field renovations, according to team officials, offseason changes to Yankee Stadium were designed to have the same effect. Call it the 2017 democratization of Yankee Stadium. Team officials emphasized that all the new spaces—and food and drink offerings, to boot—were available to every ticketholder, even those taking advantage of a new $15 SRO pass.

“The game has changed, and the fans have changed,” said Yankees Assistant Director of Media Relations Michael Margolis when introducing the changes at Yankees Media Day. “What we’re doing here reflects those changes in the game.”

The offseason renovations can be found throughout the ballpark, but the most visible changes are in center field, where a concession stand and two sets of bleachers were transformed into new SRO social spaces anchored by the 3,500-square-foot Masterpass Batter’s Eye Deck. The center-field concession stand above the batter’s eye was expanded with high tops, televisions and drink rails, while two limited-view bleacher areas were replaced by more SRO social spaces highlighted by new drink rails and two new bars. The space features 120 USB charging stations, many built into the new drink rails. 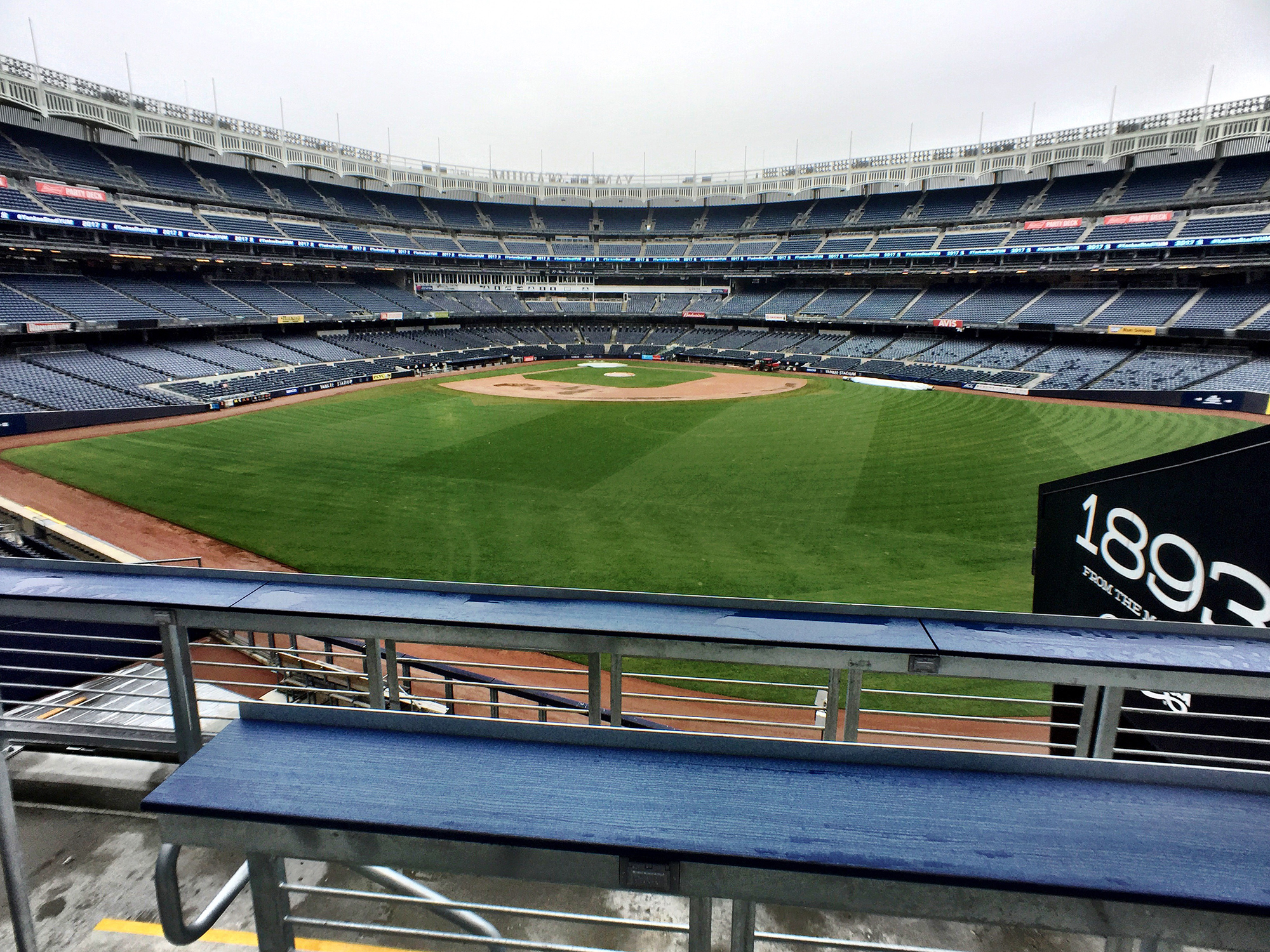 The new Masterpass Batter’s Eye Deck is flanked by Toyota Terrace (behind the home bullpen) and the Frank’s RedHot Terrace (overlooking the visitors’ bullpen). There are open bars in each terrace, and each will have distinctive food offerings, with different food on each side. Again, they’re open to all. Despite the removal of the obstructed-view bleacher areas, the Yankees say a new season pass added 200,000 tickets priced $15 or less to ballpark inventory. (That’s in general; dynamic pricing is in effect, so some games may have a higher ticket price.) That’s a huge shift for the Yankees, as many have criticized the team for high ticket prices and an emphasis on big-buck patrons. And while there are still Yankee Stadium private clubs, there is a decidedly new emphasis on expanding the fan base.

Besides the expanded Masterpass Batter’s Eye Deck and adjoining terraces, another example of the new Yankee Stadium approach can be found down the third-base line on the 100 level. The AT&T Sports Lounge features a full bar and seating area extending into the concourse. It’s pitched by the team as a social gathering area. It’s envisioned as a space where friends can meet at the ballpark, even if they are not ticketed together. The new lounge is part of a renovated ballpark area that includes a Lobel’s stand (below) and the Mighty Quinn’s BBQ stand (above). In a nice touch, the Lobel’s stand features a window to a butcher breaking down menu offerings. Also on the social front: the upper-deck Budweiser Party Decks behind sections 310 and 328. General concessions areas were upgraded to gathering spots, complete with full bars, tables, TVs and drink rails. Again, the emphasis is on a place to watch the game in a spot other than your assigned seat, perhaps meeting friends who have seats elsewhere in Yankee Stadium.

Finally, there’s one other new space worth noting: the first kids’ area in Yankee Stadium. The Sunrun Kids Clubhouse is designed to entertain kids and pamper parents, with shade for a sunny hot day and overhead heating lamps for cooler days. While the kids scamper on the ballpark-themed play area or test their pitching prowess with a speed gun, parents can rest in the adjoining bleachers and track the game via overhead TVs. In addition, there are nursing spaces and two family restrooms. On the Food Front

Along with the ballpark improvements, the Yankees also unveiled an upgraded food and beverage lineup. The takeaway here: Matt Gibson, the team’s executive chef, stressed all new food items would be available to everyone at the ballpark.

That includes the new Classic Meatloaf Burger and USDA Prime Steak Sandwich offered at the new Lobel’s stand. It also includes the Brontosaurus Rib at the revamped Mighty Quinn’s BBQ stand (a full pound of tender short rib on the bone, smoked for 16 hours), where you can also find high-end brisket and pulled-pork sandwiches. And there are plenty of other New York City delicacies found throughout the ballpark, including a Brooklyn-style egg cream seated at a stand near section 202, Nathan’s hot dogs, and various upscale burgers at Bareburger, located behind Section 132. For those seeking healthier options, a Melissa’s Farmers Market stand at section 121B features fruits, veggies and salads. There are also gluten-free, vegan, vegetarian and kosher stands and offerings throughout the ballpark.

These items were available for sampling on Media Day, and they all were uniformly tasty. We’d highly recommend the Brontosaurus Rib at the Mighty Quinn’s stand. It looks like something Fred Flintstone would order at the Bedrock Drive-In (which, of course, makes it perfect for a selfie) and it tastes great, to boot.

Like every other MLB team, the New York Yankees are in the baseball business. But the Yankees are also in the memories business, and the upgrades to Yankee Stadium for 2017 are designed to help fans create their own memories and experiences. You don’t need to be a hardcore fan to remember your first major-league game, that first trek to Yankee Stadium, that moment when the first glance at green grass takes your breath away. And you don’t need to be a hardcore fan to remember that great night at the ballpark spent with close friends. Not every major-league game is going to be memorable—but any night at the ballpark can be memorable, and the new Yankee Stadium spaces give you the tools to create your own ballpark memories.