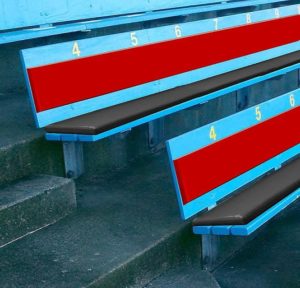 The Victoria HarbourCats (summer collegiate; West Coast League) have announced the addition of the Campbell Real Estate Club Seats to Royal Athletic Park. The new seats will make their debut for the 2017 season.

“We’re pleased to team with Jordan and Fraser to present this new offering to our fans, a place they can sit in comfort with great service and maybe the best vantage point for the games anywhere in our park,” said managing partner Jim Swanson.

“Every year we want to add something new to the park, something that improves the game experience for HarbourCats fans. Last year, we invested in new field-level seats behind home plate. This year, with a big help from Jordan Campbell and Fraser Campbell, we’re adding padded and served seats to Row A and Row B of Section 10, known as the “Main Grandstand.”

Row A and Row B of Section 10, known as the “Main Grandstand” to regular attenders of HarbourCats games since the team’s inception in 2013, are being up-scaled with padded seating (shown above), and servers will get food for those sitting in those seats.

Season tickets can be purchased in the Campbell Real Estate Club Seats for $589.50 — gaining admission for all 27 WCL regular season games, four additional planned non-league games. Seats that aren’t sold as season tickets will be available in that area for $25 as individual-game tickets.

“Jordan is a former youth baseball player, coach, official, and is currently on the board of the Greater Victoria Baseball Association. Fraser has been involved at many different levels, from coaching to being President of the GVBA, and now as a Director of the B.C. Minor Baseball Association. They understand the community that gathers at HarbourCats games,” said Swanson. “They realize that RAP is a place where people come together in the summer in Victoria, as evidenced by the 62,000-plus people who attended games in 2016, a league record. It’s excellent to be able to work with them throughout this process in putting this project in place.”