You are here: Home › Baseball Across America: San Francisco
By Mark Cryan on August 14, 2015 in Major-League Baseball, Visits As we have traveled from ballpark to ballpark during the journey, each experience inevitably is compared to the previous visits. It begins to feel like trying to pick the most beautiful girl at the Miss America pageant; each ballpark and each ballgame is wonderful in its own way. The enthusiasm and energy of the Royals fan base, the joyous celebration that is Busch Stadium, the truly classic downtown ballpark in Denver; each is a singular experience.

And now, we have a day game, on the bay, in San Francisco’s AT&T Park. Wow. 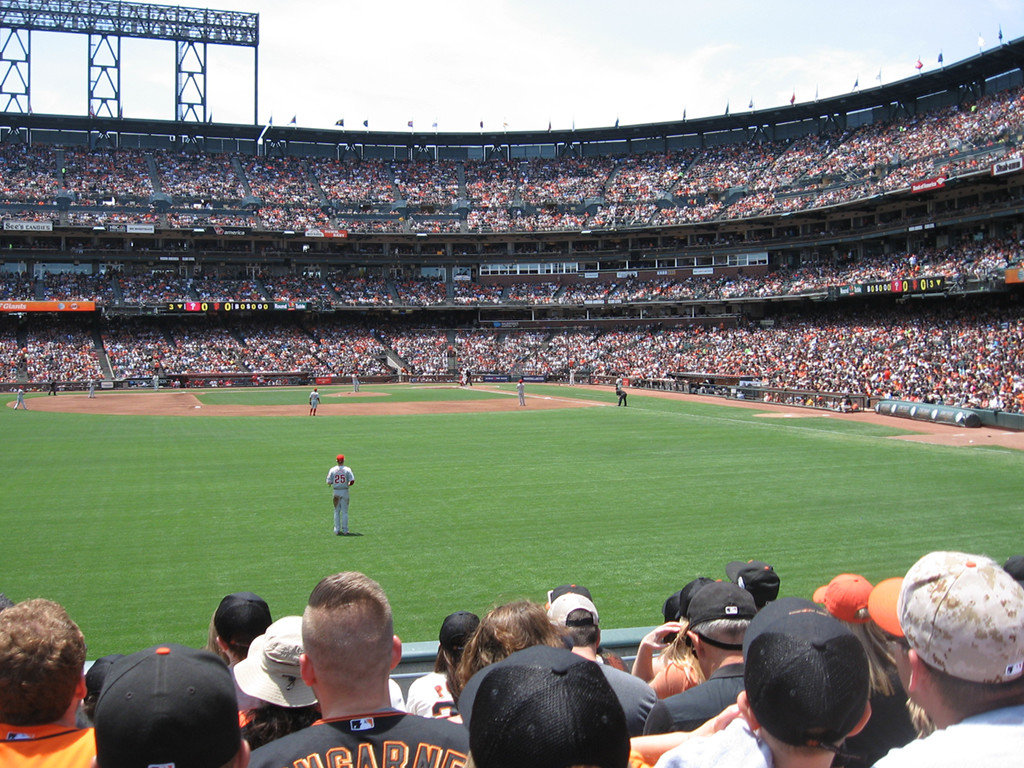 This is the only ballpark we have visited on this trip with a Marina Gate, yes, because they have a marina adjacent to the park. On the edge of the bay, with unique angles and tributes to the franchise’s long and proud history (both in San Francisco and in New York), all over the park and the surrounding neighborhood, it is hard to believe how close this city came to losing the Giants. But on a day like we experienced, it is impossible to imagine that it could ever have been any other way than this.

I won’t go into great detail about the park itself, since it has been well documented, and with the team’s recent success, most fans have seen plenty of Giants games on TV. Suffice it to say, it’s a modern retro ballpark, executed to perfection in a truly unique piece of land. It’s classy, with even the bleacher sections blessed with a sort of lounge area underneath the seats, a dizzying array of food offerings, lots of local products (from crab cakes to Ghirardelli’s ice cream), and even a sustainable garden in the hitter’s eye. There are other elements demonstrating the team’s connection with the unique vibe that is San Francisco, like an open area on the right field walkway outside the park, where a handful of fans to watch a part of the game for free. Palm trees on the outer plazas, statues of luminaries like Willie Mays and Juan Marichal gracing each corner of the block, and a pleasant, yet gritty, authentic city neighborhood surrounding the park all combine to make this a must-visit park for the ballpark collector. And, in this most progressive of cities, where the people believe in big public projects and the good they can do, they nonetheless didn’t believe in public money paying for a new ballpark, so the team ultimately paid for this beautiful ballpark.

Tickets are pricey, and the team’s pioneering use of “dynamic ticketing” makes them a moving target; but the team is certainly capturing all the revenue the market will bear. As some indication, the bleachers seats where we sat were $32 for a Sunday afternoon game against the dreadful Phillies, but the place was packed, regardless.

Throughout most of our trip, we have cheered politley for the home team. It seems like the right thing to do, but with apologies to my late friend Jason Matlock, who bled Dodger blue, we proudly wore our giveaway Giants gear, and yes, for this day, we were Giants. In left field, the Coke Slide is really unique; the big Coke bottle has a slide for kids inside.  It’s really twisty and fun, the line moved fast, and it’s free.  There is also a batting cage, and there is a mini-AT&T Park where you can try to hit a wiffle ball home run. This park is packed into a small piece of land, so it’s understandable there is not more kids stuff here, since those things take up a lot of space. We were also very fortunate to get a truly expert tour of the ballpark, including introductions to practically every game worker in the stadium from our host Alex Simon, who has literally grown up in this park. His parents have had season tickets since before he was born. In fact, they attended a Giants fantasy camp for their honeymoon. Alex has interned for the Giants flagship radio station, and is also doing some work at the ballpark this summer for a credit card company offering Giants towels and blankets for signing up for a new account. And when he’s not at the ballpark working, he’s watching the game with a dedication that he learned from his parents.

Alex also provided us a terrific one-day tour of the sights of San Francisco, where we visited the Golden Gate Bridge (still a marvel of engineering, more than 70 years after it was constructed), Fisherman’s Wharf, the Ghirardelli chocolate store, lunch at Franscisco’s overlooking the bay(since 1957!), Chinatown and the Embarcadero (San Francisco’s bayside boulevard).

Getting to San Francisco

We were reminded of what real big city traffic is; with apologies to Kansas City, Denver, etc, San Francisco has traffic like New York. The wait to get across the bay bridge was an exercise in either patience or frustration, take your pick. I used to have a daily commute through the Lincoln Tunnel, but it was a long time ago. I don’t know how people do it every day for a career.

On our way toward San Francisco, we stopped late at night at a very promising Wal-Mart lot with plenty of trees and landscaping, and a nice surrounding area. This was apparently a store that didn’t allow overnight parking. Less than an hour after we put our blinds in the windows and put a movie on the laptop to watch, there was knock on the door by Wal-Mart security. We turned down the laptop, ignored the knock, and were not bothered again for the rest of the night.

Ultimately, the best thing I can tell any baseball fan is to get themselves here and see a game. Experience every bit of the ballpark, and this great city.