You are here: Home › Baseball Across America: Denver
By Mark Cryan on July 29, 2015 in Major-League Baseball, Visits 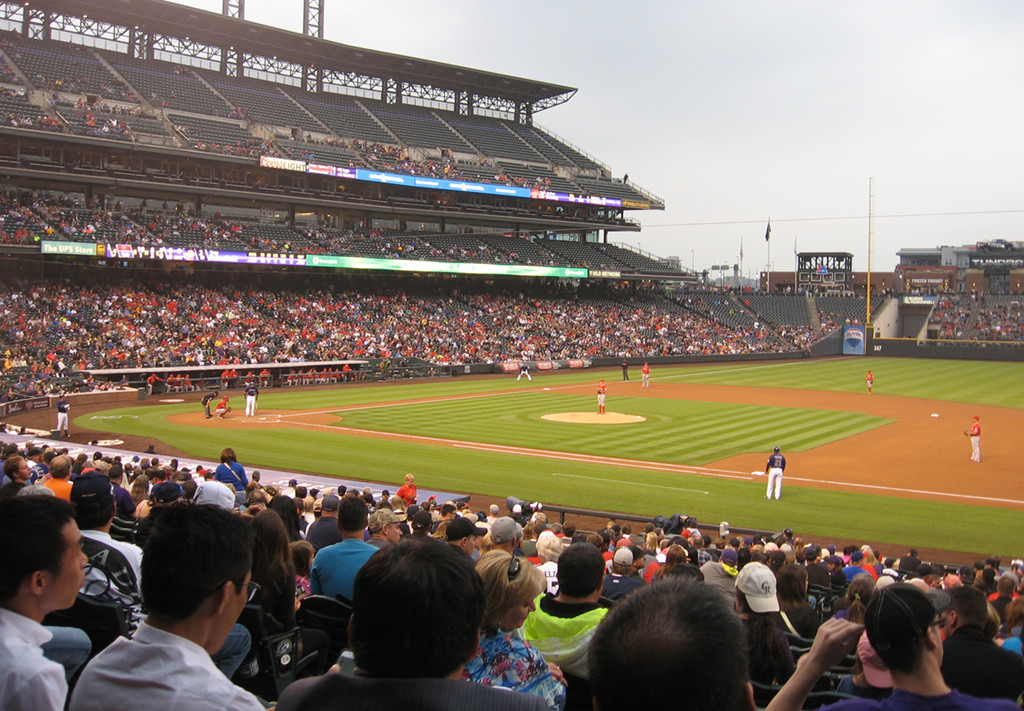 What a ballpark! While Coors Field opened all the way back in 1993, it stands as a classic of the modern retro era ushered in by Oriole Park in Baltimore. The level of detail in the stonework and steel, the massive concourses, the welcoming feel of the dark steel and dark seats and the rotunda-like main entry all combine to create an experience unequaled among this class of ballpark.

This will sound familiar to regular readers, but I feel compelled to defend the brick and exposed girder retro look. Stadium snobs will rave about “new” and “innovative” ballpark designs that look like nothing else anywhere, but in each market, the home park is the only ballpark that most people go to regularly. So, does it really matter if there are lots of similarities between Oriole Park, Coors Field, and Busch Stadium? Doesn’t everyone have a favorite pair of jeans? Aren’t they all pretty much the same? I don’t have to wear plaid pants just because someone in Baltimore is already wearing jeans. With that soapbox moment behind us, let’s get back to Coors Field. Big picture, this ballpark has clearly been a driver of economic activity in downtown Denver. We were at the game on a Tuesday night, watching a last-place team, and there were still 25,000 people there, and when we left the ballpark, we passed by one club after another that was full of people enjoying the nightlife, many of them coming straight from the game.

At the game, the staff was tremendously friendly, with smiles, welcomes, an obvious real willingness to help, and lots of “thanks for coming” on the way out. The team may be struggling on the field, but the staff is well-trained. As is our habit when we have to buy our own tickets, we bought the cheapest tickets that would get us in the door and moved down to good seats later. (We did miss out on the best deal in the park; a Rooftop ducat for under $15 that includes a good portion of that price in food value loaded on each ticket, but we’ll get back to the Rooftop.). Our original seats in the upper deck above home plate took us up to the row of purple seats that denote the “mile high” point in the park. The sightlines were good from here, although we didn’t stay up there long.

Despite the novelty of interleague play, and a visiting Angels lineup featuring future Hall of Famer Albert Pujols and wunderkind Mike Trout, there were lots of empty seats, and we moved down to my favorite spot in every ballpark; about fifteen or twenty rows above first base. We also enjoyed seeing both Pujols and Trout homer in the same game, a nice historical footnote for me and Ty. The Rockies’ most notable ballpark development of recent years is the Rooftop. This renovation converted some rarely used seats in the upper deck in right center field into a multi-level complex of bars and public space. There are sitting areas, public spaces for activities like corn hole, where we ran into recent Elon University Sport & Event Management graduate Allie Harden, who is working for the Rockies. There are also several different bar-type spaces, including some that can be used for private groups, and most that are open to the public. Each of these spaces leads out to an open concourse with drink rails and space to stand and watch the game, and below that, a small section of seats. The view of the game is, of course, the most distant in the park, but the atmosphere was lively, and this space is open to anyone in the ballpark. (Here’s a fuller article on the Rooftop from its opening weekend in 2014.) I was favorably impressed with our visit to Busch Stadium and found it to be heavier on small architectural details than I expected, but I have to admit that Coors Field has a level of intricacies, particularly in the brickwork, that is a cut above. It evokes Fenway Park and seems to fit the neighborhood in scale, despite its massive size. The patterns in the brick, the images of the state flower included in almost every section of the park (as shown above), and the brick finish all combine to create an incredible ballpark with a truly classic feel.

Coors Field has a playground in left field and some really good kids meal deals in the concessions stand next to the playground. They also had in a different area some batting cages and an area for little kids to hit the ball off of a tee. In this same area they also have a speed pitch game. Most of these had some cost attached to it. A couple Colorado-specific notes. Driving in the Rockies is pretty awful for a flatlander like me. We passed over the Continental Divide in Colorado, and on the way down the mountain, I had to pull over and stop for a while after smoke began pouring off my brakes. Yes, I know, brake with the engine, etc, but this was so steep that we had to do it in a couple different “legs.”

We took a non-baseball detour to Mesa Verde National Park and saw the cliff dwellings built by ancient Pueblo people around 1100 AD. There are like small cities built into these recesses in the sides of the canyon. We also camped out for two nights, successfully building a campfire, roasting hot dogs, and strumming the guitar and singing. This was a sort of redemption after our disastrous night of “camping” in Kansas City marked by tornado warnings – complete with several hours hunkered down in a bathroom/storm shelter graced with a strong scent of urinal cakes.

The park itself is beautiful and filled with much more that we expected; multiple cliff dwellings, some other archeological sites, and a visitors center that was informative and interesting despite looking a bit out of date. This indoor exhibit also provided an ideal place to avoid a thunderstorm.

While we were in Colorado, we also felt like we needed to do some whitewater rafting, and we spent a couple hours on the Colorado River, paddling through class II and III whitewater. It was a beautiful day, and great fun for us both.