You are here: Home › ULI: Astrodome should live on
By Kevin Reichard on March 23, 2015 in At the Ballpark, Endangered Ballparks The Urban Land Institute is pitching a preservation plan for the Houston Astrodome that would revive the Eighth Wonder of the World as a tourist destination while adding economic activity to NRG Park.

Harris County has been seeking a reuse plan for the Astrodome that taxpayers can support. A referendum to renovate the Astrodome was shot down by voters in 2013, but county officials have held off on any demolition plans — the path preferred by the NFL’s Houston Texans and the Houston Livestock Show and Rodeo officials — until it’s clear no other reuse plan is feasible.

The Urban Land Institute, a nonprofit education and research group, prepared a report, The Astrodome, Harris County Texas: A Vision for a Repurposed Icon, covering what can be done. We’ve covered the initial recommendations already, but with ULI issuing a final report today, we’re revisiting the plan.

The meat of the plan:

“We quickly realized that the historic value of the site made retaining the Astrodome structure essential,” said Wayne Ratkovich, president of The Ratkovich Company, who chaired the group presenting the report. “Our vision for the Astrodome is one of a grand civic space that enhances the entire NRG Park Complex.”

The report notes that the complexity of such a monumental transformation – turning a vast empty interior space (dubbed the “biggest room in the world” by one panelist) into a programmable indoor park and civic space – calls for the adoption by Harris County of a framework of guiding principles to ensure a high-quality outcome. “The re-purposed Astrodome must be aesthetically and historically sensitive as well as functional and self-sustaining,” the report says. 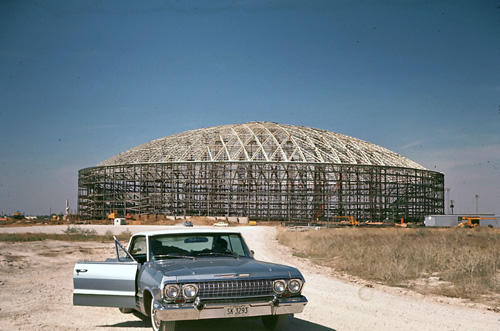 The recommended guiding principles include a commitment that the Astrodome will be rehabilitated as a civic space accessible by train, bike and car; and that the facility’s historic and architectural importance will be respected and not treated as a relic, but rather enjoyed as an active, dynamic public space. Among other principles: that the Astrodome will be a regional destination for residents and visitors; is designed to celebrate arts, education, technology, innovation and history; and that it plays a significant, functional role within the entire NRG Park, serving as an asset to the Texans, the HLSR, and the OTC.

“The creation of a truly unique indoor park, accessible to all in the region, harkens to the early 1960s (when the Astrodome was built) by providing an innovative, provocative approach to how public space is created and used,” the report concludes. “It is inconceivable that the Astrodome should not be the centerpiece of NRG Park.”

Whether or not the report is actionable remains to be seen. But the fact that Harris County is still looking for a solution is good news for those who don’t want to see the 1965 classic torn down.