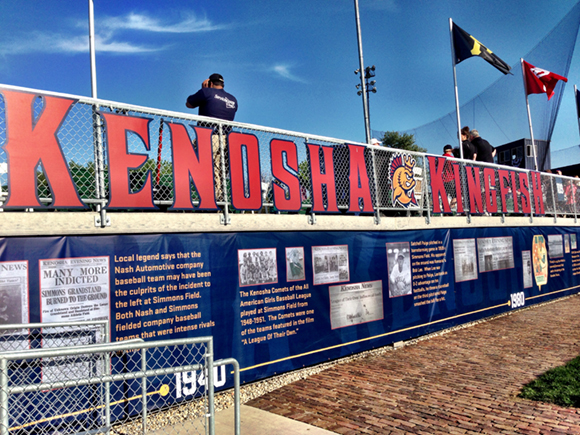 This, friends, is why summer-collegiate leagues exist: to provide new life to old ballparks – evidenced by the makeover of Simmons Field, home of the Northwoods League’s Kenosha Kingfish.

A successful business model for summer-collegiate ball is pretty simple: take an old ballpark formerly used for minor-league or industrial-league play, fix it up, and play ball. The extent of the renovations depends on the owners and the needs: in Kenosha, it was decided that a $1.4 million renovation, basically leaving nothing but the historic grandstand, the playing field and a newer office/team store/restroom building intact, was the way to go. The city kicked in $750,000, with the rest coming from Kingfish team owners.

Which is good news for baseball fans in Kenosha, as a historic ballpark has been saved. There is a long history at Simmons Field, where baseball was first played in 1920, when the Simmons Mattress Company built a ballpark to host a factory baseball team, the Simmons Bedmakers. That original wooden grandstand burned down – reportedly an act of Nash Motors factory-team players, who were a little overzealous in their postgame celebration after defeated a noted rival in the Simmons team.

The present grandstand was built in 1930, and in 1947 it was converted to the home of the Kenosha Comets of the All-American Girls Professional Baseball League, who played there through 1951. Over the years it hosted barnstorming major leaguers like Satchel Paige, Bob Feller and Warren Spahn. It was been used as the home of the Kenosha Twins (Low Class A; Midwest League) in 1984-1992, the Kenosha Kroakers (Northwoods League) in 1994-1998 and the Kenosha Mammoths (independent; Frontier League) in 2003. Fittingly, Bob Lee was the man who brought the Kenosha Twins to town in 1984, and he was on hand to throw out the first pitch opening night. Since then, it has been used for high-school and town ball. Big Top Baseball – the folks who also own the Northwoods League’s Madison Mallards, Wisconsin Rapids Rafters and Green Bay Bullfrogs – approached the city with an ambitious plan to make over the old warhorse. All seating down each line was torn up, replaced by concrete risers installed with seats recycled from Oriole Park at Camden Yards and backed with a signage displaying a timeline of the ballpark’s history. Two multilevel suites were installed on each side of the grandstand. The grandstand wall was moved in, and 25 four-top tables were installed, providing a birds’ eye view of the playing field. A kid’s area with bouncy houses, games and a sandbox was installed down the first-base line, along with a berm. Group areas were installed in the left-field corner. Various concessions, including a frozen-custard stand, were installed behind the grandstand. Also fittingly, there are plenty of retro touches, including the manual scoreboard in left center. The concourse was torn up, replaced by a walkway of pavers reclaimed from a century-old downtown building. The grandstand was repainted, with recycled seats from Oriole Park installed. There’s not a bleacher in the place, and plenty of fan amenities – drink rails, accessible access – you’d expect in a modern ballpark. And, of course, there’s the Bambino, installed in the left-field corner and in the field of play. A 43-feet-long by 13-feet-wide fishing boat long used as a commercial fishing boat in Chesapeake Bay and most recently residing at Mount Clemens Marine in Michigan, the Bambino replaced a section of fence in left field. It was refurbished and is used for private parties of up to 25 people during all Kingfish home games, complete with concessions, drink rails and stool seating. Kingfish coach Duffy Dyer (who managed the Kenosha Twins in 1984 and 1985) apparently was a little quizzical as to the ground rules associated with the boat: the top of the hull is the home-run line. It was a factor during opening night: a double down the line bounced into the Bambino and immediately died, with the left fielder expecting a bounce.

The Kingfish branding is pretty clever: besides the fish, the team’s image involves plenty of homages to the King, Elvis Presley. The team mascot, King Elvis The First, is a clever combination of a crowned fish wearing a white jumpsuit a la thin Elvis. Elvis-themed concessions are on the menu. And the grounds crew – who also help out directing traffic before a game – are outfitted in the same white jumpsuits, augmented with sunglasses and Elvis wigs.

Simmons Field was an endangered ballpark, according to some Kenosha officials. The makeover for the Kingfish will ensure it remains around for a long time – including a well-deserved 100th anniversary in 2020.

Concessions
As is the case with any Big Top Baseball ballpark – like Warner Park or Witter Field – be prepared to come hungry. In keeping with the Elvis there, there are concessions based on the King’s favorite victuals. You can buy a hot dog served a la King, with peanut butter and banana. At the Gilles Frozen Custard plan there is a chocolate- and bacon-covered frozen banana with peanut butter for $3. And in homage to the area, the same stand sells a strawberry kringle sundae for $4.5. Kringle, of course, is a Danish (as in Denmark) pastry produced in abundance in nearby Racine.

For the adults, there’s the Miller Lite Fish Bowl, which features all-you-care-to-consume food, beer and water for $28.

The usual ballpark staples – hamburgers, hot dogs, pop, beer – are served in plenty of stands both behind the grandstand and at the top of the stands down each line. And the tabletop seating features nightly specials: ribs and brisket were on the menu opening night.

Parking
Arrive early. There is a small parking lot next to the ballpark and one in back (comprising roughly 227 parking spots), but those fill quickly. Sheridan Road is a major four-lane throughway in Kenosha, but you’ll find plenty of signs guiding you to nearby parking spots in area businesses. Just look for the jumpsuited Elvi. For the Kids
Basically, anything down the first-base line is geared for the families, who can camp out on the berm and then go with the kids to a play area that features a bouncy house, a sandbox and other kid-friendly features. King Elvis the First, naturally, is a huge hit with the younger crowd: no kid can not be impressed by a jumpsuited fish flying down the third-base line on a zipline before the first pitch.