You are here: Home › Cincinnati Reds Ballparks: 150 Years of History
By Kevin Reichard on April 2, 2019 in History, Major-League Baseball We’re not talking about 150 years of consecutive years of a pro team called the Cincinnati Reds: there are a few gaps in the team history. But the 150-year anniversary is real: the original Cincinnati pro team debuted in 1869, and what we today call the Reds franchise debuted in 1884. Here are the ballparks these teams played at since 1869, as noted by the Reds on the MLB website:

Located near the present-day Union Terminal train station, Union Grounds seated 4,000, with many fans located in a large grandstand nicknamed the “Grand Duchess.” Like many ballparks of the era, the grandstand owed more to the design of a horse-racing facility than anything looking like a modern ballpark.

Located north of the city core, Avenue Grounds featured a smaller grandstand seating 3,000. And, of course, it was located near a train line.

Comfort was the name of the game at League Park, originally named American Park when the Reds were in the American Association and renamed when the team switched to the National League. The grandstand sported leather-cushioned seats. The grandstand burned down in May 1900 and was rebuilt in a temporary spot, with home plate moved to right field and the old grandstand left standing in left field. Built at the League Park location, the Palace of the Fans was truly a luxury facility, a palace for those with the means. Reds owner John T. Brush, who would later own the New York Giants and the Polo Grounds, wanted a facility that would make an impact, Carriage stalls at the bottom of the grandstand were designed for fans to directly access their seats from their horse-drawn carriage. And what seats! The façade featured 22 hand-carved Corinthian columns, with the look borrowed from the 1893 World’s Columbian Exposition (the so-called “White City” Court of Honor) in Chicago by architect John G. Thurtle. Thurtle was obviously not a baseball fan: he included 19 “fashion boxes,” a precursor to today’s luxury suites, but failed to include dugouts or clubhouses. Meanwhile, the rooters were placed underneath the grandstand, behind chicken wire, left to consume whiskey and beer while expressing their pleasure or displeasure with the game. After a decade, however, many structural problems emerged, leading team ownership to tear down the facility. The third ballpark at Findley and Western, Crosley Field – the “old boomerang at Findlay and Western” – also had the longest tenure of any Reds ballpark to date.

Redland Field, named to honor the traditional color of Cincinnati baseball teams, opened its gates on April 12, 1912. The hometown Reds rallied from a 5-0 deficit to defeat the Cubs 10-6. Redland was built for $225,000 and was another of the many classic steel and concrete parks constructed during the first ballpark boom era of 1909-1923. The red brick, boomerang-like edifice was originally built featuring a covered double-decked grandstand that wrapped around home plate and extended about thirty feet past both first and third base. Single-decked pavilion seating continued into both outfield corners. Total seating capacity was just over 20,000. It was one of the smallest-capacity parks when it was built and remained one of the smallest in the league throughout its six-decade history. The outfield bleachers only held 4,500 fans, all in right field. In fact, permanent seating was never employed in left and center field.

By 1933 Reds owner Sid Weil lost the team to bankruptcy. The bank hired Leland Stanford “Larry” MacPhail to look after the Reds. MacPhail, cankerous and hot-tempered, would prove to be one of baseball’s great innovators. His first move was to sell the majority of the club to Powel Crosley Jr. Crosley was one of the first millionaires whose fortunes came from the new medium of direct mail, and he turned that early fortune into a media empire that included 50,000-watt radio station WLW (“the Nation’s Station”) and the first NBC affiliate. In a way, he was a predecessor of Ted Turner, buying the Cincinnati Reds for $450,000 and using team broadcasts as a way to prop up his radio and television interests. In fact, a Reds TV broadcast became the first sports program ever broadcast in color.

Perhaps the greatest moment in Crosley Field history came on May 24, 1935, when the Reds defeated Philadelphia 2-1 in the first night game in major league history. Twenty-six years earlier in 1909, inventor George Cahill had shown off a new portable lighting system. He built five steel towers for The Palace of the Fans and strung lights for an Elks Lodge game between Cincinnati and Newport, Kentucky. In 1931, the Reds shared portable lighting equipment with the touring House of David baseball team for a night exhibition. By the mid-thirties, with one in four Americans out of work and the rest employed from nine to five, Larry MacPhail was able to convince Powel Crosley and the minority partners to try night baseball. On that May night, with 20,422 onlookers in eager anticipation, FDR threw a switch 500 miles away in Washington and Crosley Field made history and baseball was changed forever.

Crosley Field is long gone, but you can visit the area and see plenty reminders of its glorious past.

By the 1960s, the economic growth that Cincinnati was experiencing was all but absent from the warehouses and factories of the west end of town. When the Superior Towel and Linen Service laundry left the area and took with it one of Crosley’s hallmarks, it symbolically predicted the Reds’ abandonment of the area. The team, playing in the major’s smallest stadium, was eager to jump on the multi-purpose stadium bandwagon and flee to the publicly financed Riverfront Stadium downtown on the banks of the Ohio. The final game at Crosley was played on June 24, 1970. Over 28,000 nostalgic fans saw Johnny Bench and Lee May homer to edge Juan Marichal and the Giants, 5-4. After the game, a helicopter transported home plate to the new digs downtown. Crosley would spend the next two years as an auto impound lot and was eventually bulldozed in 1972.

Riverfront Stadium was the archetypal cookie-cutter stadium, with a circular design that could be configured both for baseball and football (in the form of the Cincinnati Bengals). The Reds were a solid draw at Riverfront, thanks to a winning team in the form of the Big Red Machine, drawing more than two million fans annually for eight consecutive seasons, from 1973 through 1980.

But neither the Reds nor the Bengals were happy with the joint tenancy. After Hamilton County voters approved funding for two new facilities in 1996, planning began on Great American Ball Park, constructed directly next to Riverfront Stadium. 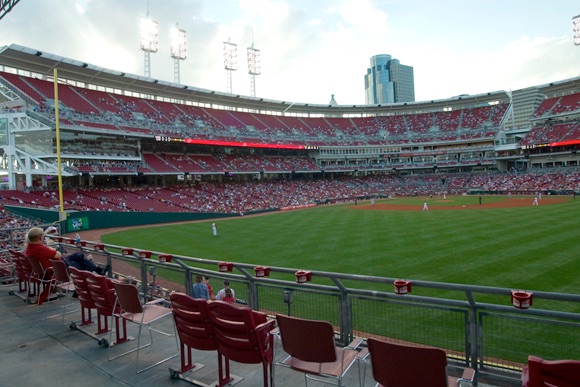 The present home of the Reds was designed as a modern facility with plenty of nods to the past at a scenic riverfront site. The Sun Deck/Moon Deck is designed to be evocative of similar bleacher seats at Crosley Field, the team’s former home. (For day games the bleachers were called the Sun Deck; for night games they were called the Moon Deck. Waite Hoyt called those bleachers Burgerville because of the many patrons sipping on a cold Burger Beer.)

The main entrance, Crosley Terrace, is designed to evoke memories of the Reds’ former home, Crosley Field. Statues of former Reds greats Joe Nuxhall, Ted Kluszewski and Ernie Lombardi dominate the area, which is reached after passing through a limestone giant bas relief entitled “Spirit of Baseball.” Past the front gates are two large mosaics honoring the original 1869 Cincinnati Red Stockings and the 1970s Reds of the “Big Red Machine” era. Go out to the children’s play area in the northwest corner of the concourse level and you’ll see historical displays of prior ballparks in Reds history, including the aforementioned Crosley Field, Riverfront Stadium/Cinergy Field and the Palace of Fans. And, of course, the ballpark features the Cincinnati Reds Hall of Fame and Museum, one of the finest such facilities in all of baseball. We last visited Great American Ball Park a decade ago; yes, it’s time for a return visit.

Taken together, this is a pretty solid ballpark history over the last 150 years, with several iconic ballparks in the mix. Any ballpark history that includes Powel Crosley Jr., the Big Red Machine, turn-of-the-century opera boxes and not one, but two Sun Deck/Moon Decks certainly doesn’t lack for anything.