You are here: Home › Who Has The Best Player-Development Facilities in 2019? We Rank From Bottom to Top, Part 1
By Ballpark Digest Editors on March 18, 2019 in Major-League Baseball, Minor-League Baseball With the addition of the Fresno Grizzlies (Pacific Coast League) as a new Triple-A affiliate, the Nationals added a farm club that offers a solid fan experience at its home ballpark, Chukchansi Park. However, Fresno represents a glaring outlier in a system where the remaining farm clubs and spring-training operations are concentrated on the east coast. There are also still a few unresolved facility issues in this system, including those in Hagerstown (Low A; Sally League) and Auburn (Short Season A; NY-Penn League). It is largely because of those issues that the organization remains at the bottom of our rankings for this year, but there is at least some improvement in the offing for 2020. The Potomac Nationals (High A; Carolina League) are slated to move into a new Fredericksburg, VA ballpark in 2020, which would solve one of the longest-running facility issues at the High-A level and give the system its first new venue since FITTEAM Ballpark of the Palm Beaches opened for spring training in 2017. The Angels have a top-tier Triple-A affiliate in the Salt Lake Bees (Pacific Coast League), who provide strong scores with their long affiliation with the Angels and a facility in Smith’s Ballpark that checks in with strong scores in every relevant category. However, as a whole the rest of the system offers room for improvement, reflected by the scores in some lower levels of the system. At least one potential boost is in the offing, however, as the Mobile BayBears (Class AA; Southern League) are slated to relocate to Madison, AL in 2020 and open a new ballpark. By extending their PDC with the franchise through 2022, the Angels set themselves up to reap the benefits of the new ballpark, which will surely increase their scores at the Double-A level and potentially help move them up the rankings a year from now.

It is rare that an organization can split from a facility the quality of what the Nashville Sounds (Class AAA; Pacific Coast League) offer at First Tennessee Park and improve its score, but the A’s did that by forming an affiliation with the newly branded Las Vegas Aviators (Class AAA; Pacific Coast League). Not only are the Aviators opening a new ballpark (rendering above) this season, but they represent a much better fit than Nashville in terms of proximity for the A’s. Still, there is some room for improvement in the system. The Beloit Snappers (Low A; Midwest League) have needed a new ballpark for years, and are still working on a plan to replace Pohlman Field with a modern facility. Although the Mariners’ score did not change significantly from a year ago, they are sliding down the rankings this year as some systems previously below them improve their totals. The West Virginia Power (Low A; Sally League) offer decent scores in the areas of player facilities and fan experience at Appalachian Power Park, but the club represents a far-flung affiliate in a system with many Western farm clubs. Helping to boost the Mariners are one of the steadiest affiliations in all of baseball with the Tacoma Rainiers (Class AAA; Pacific Coast League)–who play at a well-maintained and operated Cheney Stadium–a solid ballpark at the Double-A level in the Arkansas Travelers‘ (Texas League) Dickey-Stephens Park, and a spring-training facility that has been diligently upgraded over the years in the Peoria Sports Complex. After a 16-season affiliation, the Marlins and Greensboro Grasshoppers split after the 2018 campaign, with the Marlins signing a new player development contract (PDC) with the Clinton LumberKings, a move that lowered their scores at the Low-A level. It is not so much an issue of the LumberKings offering an inadequate facility, but Greensboro is among the elite at the Low-A level and Clinton’s distance from the other clubs in the system (primarily concentrated in the Southeast) puts a huge dent into the Marlins’ proximity score. Batavia’s Dwyer Stadium remains an issue, with the New York-Penn League is trying to at least stabilize the facility’s quality until a longer-term solution is reached. Upgrades are being explored at Jupiter’s Roger Dean Chevrolet Stadium for spring training and High-A, while the New Orleans Baby Cakes‘ (Class AAA; Pacific Coast League) scores in fan experience and player facilities should improve if a planned move to Wichita in 2020 unfolds as scheduled. To their credit, the Jacksonville Jumbo Shrimp (Class AA; Southern League) continue to offer a solid fan experience and player facilities at the Baseball Grounds of Jacksonville. 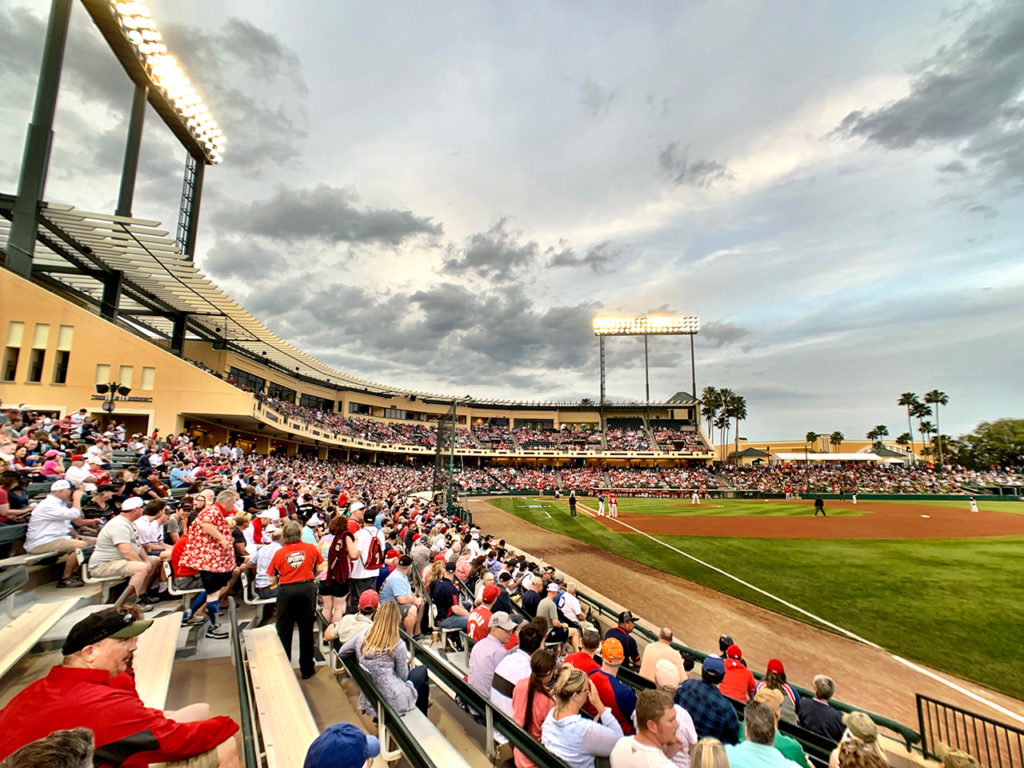 With this being the final year in which full spring-training operations are conducted at Champion Stadium at the ESPN Wide World of Sports Complex, the Braves are receiving a low stability score in that category for now. A move of full operations to North Port, FL in 2020 will help the Braves meaningfully improve their scores for spring training next year, which likely give them a decent bump in the rankings. Otherwise, the system is remarkably stable, thanks to the organization’s strategy of owning most of its own affiliates and concentrating them geographically in the Southeast. Those ballparks keep the system stable and help the Braves considerably with their proximity scores.