You are here: Home › Homes of the Braves: Ballparks of the Past
By Zach Spedden on April 14, 2017 in History, Major-League Baseball In a 146-year history that has seen them play in three different cities, the Atlanta Braves have called many places home. From their early days in Boston to the opening of SunTrust Park, the Braves’ list of home ballparks features some of the most notable venues in baseball’s history.

When the Boston franchise took the field in 1871, it played at the South End Grounds. The decades that followed several changes to both the teams name—Red Stockings, Red Caps, Rustlers, Beaneaters, and Doves all preceded Braves—and to the actual ballpark itself. Yet, the one thing that did not change was the ballpark’s site. The original ballpark opened in 1871, and would become the first of three different facilities to occupy the corner of Columbus Avenue and Walpole Street. In its original form, the South End Grounds stood until the end of the 1887 season, when it underwent a significant change.

The start of the 1888 season marked the debut of a structure at the South End Grounds site, as the ballpark debuted a two-tiered grandstand that sat 2,800 fans. The new grandstand—or The Grand Pavilion, as it was often called—stood until May 15, 1884, when it was significantly damaged in a fire. Damage from the fire left the South End Grounds unplayable, forcing the then-Beaneaters to relocate to the Congress Street Grounds. It did not take long for the third South End Grounds to take shape, however, as the team returned in July to a rebuilt ballpark that included a 900-seat grandstand plus additional bleacher seating.

For the next several decades, the franchise utilized the third South End Grounds, which was expanded multiple times after its opening to accommodate more fans. However, with more new ballparks opening in the early 20th century, it was becoming clear that the Braves would need a modern, larger facility going forward. The team played its final game at the South End Grounds on August 11, 1914, finishing out the remainder of its World Series-winning season at Fenway Park. 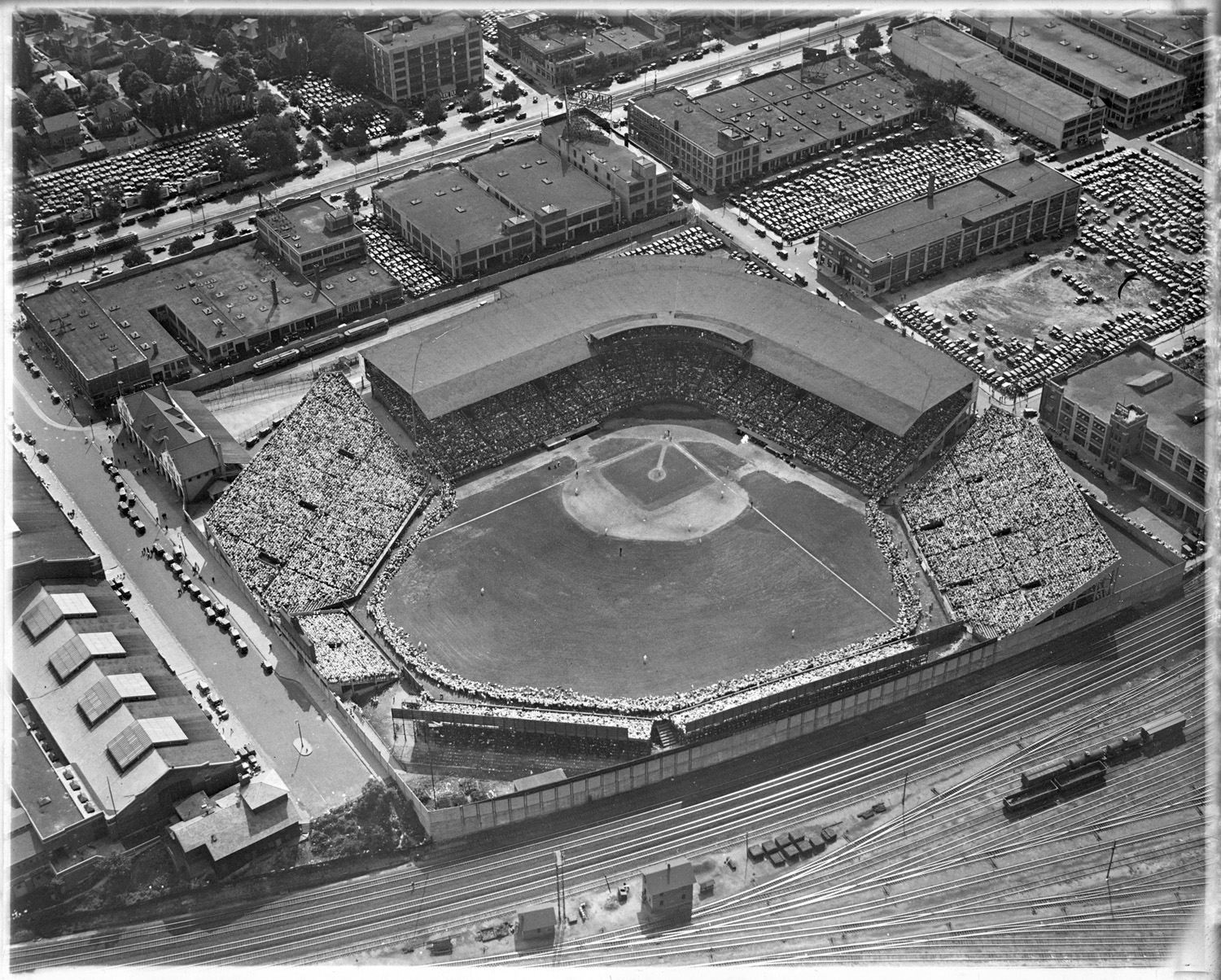 After beginning the 1915 season in Fenway, the Braves would eventually arrive at their new home—Braves Field. Braves Field opened on August 18, 1915. While the Braves appeared in just one World Series during their time at the ballpark, Braves Field cemented its place in baseball history.

Owner James E. Gaffney believed that the inside-the-park home run was the most exciting play in baseball, and Braves Field’s original dimensions included a centerfield fence that was an estimated 520 feet away. The ballpark was also notable at the time for being constructed with mostly concrete and steel, seating about 40,000 fans. The large seating capacity came into play in 1915 and 1916, as the Red Sox shifted their home games in the World Series to Braves Field in both years, because it could accommodate more fans than Fenway.

From 1936-1940, the Braves underwent a shift in identity, as they were known as the Bees. The ballpark was officially renamed National League Park during that period, but reverted to its original name when the Bees changed their moniker back to the Braves in 1941. For the Braves, the time had come to move west. In an era where many franchises began migrating west, the Braves followed suit by moving to Milwaukee for the 1953 season. Waiting for the Braves in their new city was Milwaukee County Stadium. Though it originally tabbed to host the American Association’s Milwaukee Brewers, the facility was constructed in hopes of luring a major-league franchise. And that’s exactly what happened: Before the minor-league Brewers could take the field, Lou Perini moved his Braves to Milwaukee. The Braves’ run at County Stadium proved to be memorable. Hank Aaron debuted with the Braves in 1954, joining a roster that already included the likes of Eddie Mathews, Warren Spahn, and Lew Burdette. It was also in that year that County Stadium earned a place in history by appearing on the cover of the first issue of Sports Illustrated. By 1957, the team reached the World Series, defeating the New York Yankees to capture the franchise’s first pennant since its 1914 in Boston. Returning to the World Series the following the year, the Braves carved out a distinct history in Milwaukee. That history, however, proved to be short-lived.

From the time they arrived in Milwaukee, the Braves established a stronghold in the attendance rankings, beginning with a new National League single-season attendance of 1,826,397 in 1953. Attendance numbers began a gradual decline by the 1960s, and another change for the franchise was in the offing. Just as Milwaukee officials had hoped when they constructed County Stadium, Atlanta leaders were looking to lure a major sports franchise with a facility of their own. After making a failed run at the Kansas City A’s in 1963, officials shifted their sights to the Braves, who they hoped would move to the city. The Braves eventually struck a deal that called on the team to move to the newly constructed Atlanta Stadium.

Initially, the Braves’ arrival in Atlanta was to have coincided with the ballpark’s opening in 1965. However, a lawsuit prevented the team from relocating as planned, so it spent one more season in Milwaukee before moving on to Atlanta. In the interim, Atlanta Stadium was used as the home of the International League’s Atlanta Crackers.

The Braves’ years at the ballpark, which became Atlanta-Fulton County Stadium in 1976, turned out to be their most memorable. It was at that ballpark that Hank Aaron became baseball’s new home run kin, belting number 715 off of the Dodgers’ Al Downing on April 8, 1974. In the 1980’s, Dale Murphy emerged as the face of the franchise, winning back-to-back MVPs in 1982 and 1983.

In the 1990’s, the Braves would create some of Fulton County Stadium’s most memorable moments. Starting in 1991, the Braves won five consecutive division titles over the ballpark’s final years, appearing in the World Series three times and winning the title in 1995.

As Atlanta-Fulton County Stadium played out its final years, its successor began to take shape across the street. With the 1996 Olympics coming to Atlanta, the city would needed a new venue, which arrived in the form of Centennial Olympic Stadium. As designed, the facility would host several major olympic events until the games concluded, after which it would be converted into a new home for the Braves. 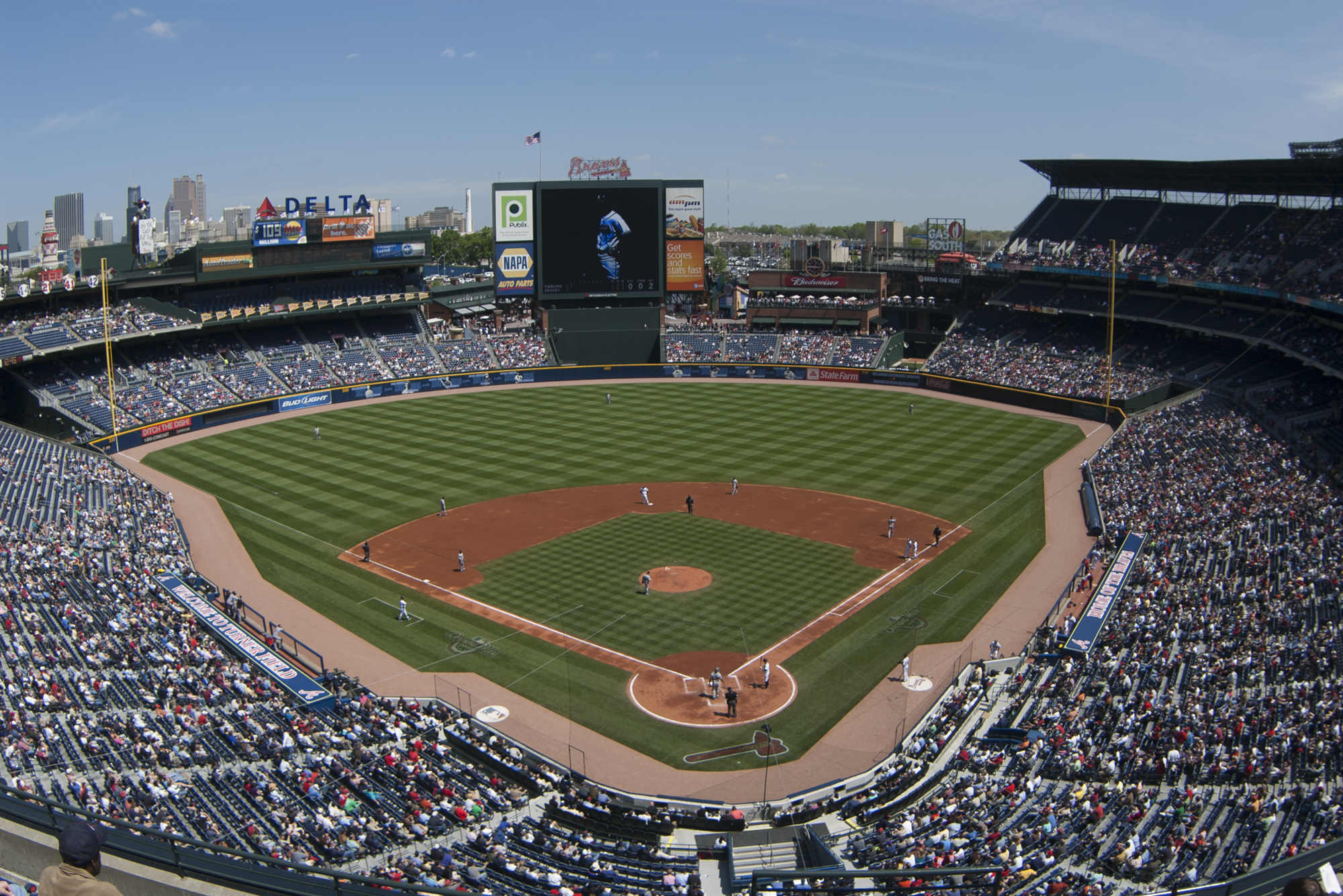 By the beginning of the 1997 season, the Braves began play at Turner Field. In order to be retrofitted from the olympics to baseball, the facility had 35,000 of seats removed, clearing the way for the ballpark’s main entrance.

Upon their arrival to Turner Field, the Braves continued their on-field dominance. The streak of division titles continued for several more years, ultimately running through 2005, and the team played in the only World Series at Turner Field in 1999. That was one year before the ballpark hosted its lone MLB All-Star Game.

Once the streak of division title ended, it took a few years for the Braves to return to the postseason, but the team clinched a wild card berth in 2010 and appeared in the Wild Card Game in 2012. The final postseason games at Turner Field were played in 2013, when the Braves won the division.

With their 20-year lease at Turner Field just years away from expiring, the Braves announced in the fall of 2013 that they were planning to construct a new ballpark in Cobb County. The ballpark was to be constructed in a private-public partnership with the county, and would be surrounded by a mixed-use development.

SunTrust signed on as a naming rights partner in 2014, while the ballpark was on pace for its 2017 opening. The Braves played their final game at Turner Field on October 2, 2016. In early 2017, the facility began its conversion to a football stadium for Georgia State University.

Now the Braves will begin a new era. Time will tell how SunTrust Park stacks up against its peers in Major League Baseball, but the Braves will hope that its history ultimately rivals that of its predecessors.